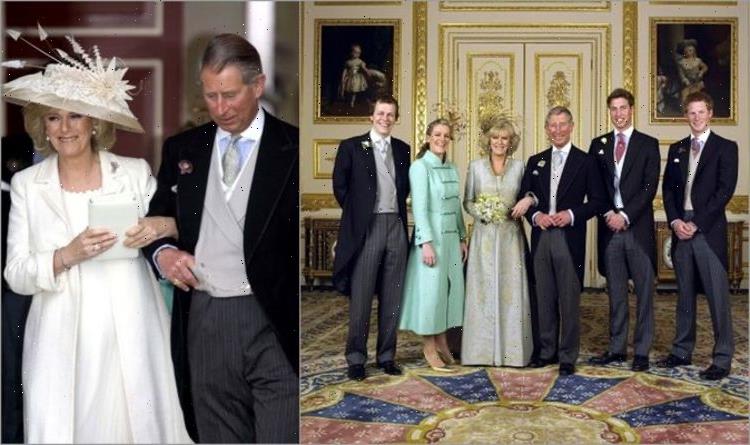 Camilla, Duchess of Cornwall decided not to wear a tiara on her wedding day, unlike all other royal brides. When she married Prince Charles on April 9, 2005, she instead opted for a cream hat, and there are two reasons why this could be the case. Firstly, this was not the first marriage for Camilla Parker Bowles.

Camilla had previously been married to Andrew Parker Bowles, with their wedding taking place in July 1973.

At this wedding interestingly enough, Camilla did wear a tiara, despite it not being a royal wedding.

This could be a standard procedure for a royal bride’s second wedding, as Princess Anne similarly did not wear a tiara for her second wedding with Sir Timothy Laurence in 1992.

The Duchess of Cornwall’s daughter Laura Lopes also wore the tiara for her own wedding to Harry Lopes in 2006.

The second possible reason for Camilla not wearing a tiara for her wedding day with Prince Charles is that the royal couple did not have a church ceremony.

While Camilla and Andrew chose a Catholic service at the Guards Chapel in London, Camilla and Charles had a civil ceremony at the Windsor Guildhall.

This was then followed by a marriage blessing at St George’s Chapel, which the Queen attended, despite not attending the actual civil ceremony.

This is because the Queen is the head of the Church of England, which officially does not approve of divorce and remarriage.

She completed the outfit with beige suede shoes designed by L.K. Bennett, a Philip Treacy cream straw hat decorated with ivory French lace and feathers, and a leather purse from Launer’s ‘East/West’ collection.

For the blessing afterwards, she wore a floor-length embroidered pale blue and gold coat over a matching chiffon dress and dramatic golden feathers in her hair.

Both ensembles were by Antonia Robinson and Anna Valentine, who told NBC News they wanted a “crisp clean look with subtle detailing” for the dress.

The two hats for the big day were made by the Irish hatmaker Philip Treacy.

The Duchess’s flower bouquet contained daffodils, jasmine, Lily of the Valley, pink and cream lilies, camellias, hydrangeas, and roses which came from the Prince of Wales’s Highgrove House gardens.

Camilla was seen with her original wedding tiara again as she wore it for a visit to Buckingham Palace in 2015.

She teamed the statement piece with dangling diamond earrings and a four-string pearl necklace.

The other members of the Royal Family have worn some fabulous tiaras on their wedding days.

This was in fact the same tiara that Queen Elizabeth wore on her wedding day to Prince Philip in 1947.

The Duchess of Cambridge for her 2011 wedding to Prince William, wore the Queen Mother’s Cartier Halo Tiara with 739 brilliant-cut diamonds and 149 baguette diamonds.

Meghan, Duchess of Sussex, was loaned the Queen Mary Diamond Bandeau Tiara from the Queen for her wedding to Prince Harry on May 19, 2018.