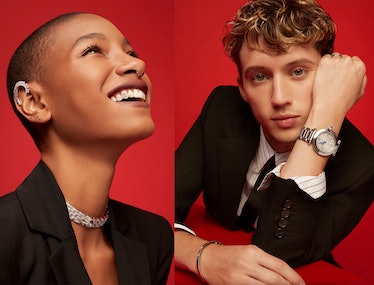 The charm of New York City in the fall is only usurped by the enchantment of New York City during wintertime. As the leaves begin to turn, department store windows shift to red, gold, and ivory colorways and a barrage of specialized marketing campaigns from every brand imaginable start sneaking onto billboards, televisions, and computer screens. This can only mean one thing: the holidays are approaching. Such a period of merriment always comes with rollout after rollout of special, cheerful, holiday-themed advertisements that fill every shopper with the hope that they’ll give friends and family the best, most coveted gift of the season. Or, perhaps, they’ll end up purchasing something special for themselves. Either way, this time of year is full of some of our favorite ads of—and we’ve rounded up all the latest and greatest, here.

Nothing evokes the warmth of holiday tidings like Cartier’s signature crimson hue—and its romantic jewels cast in 24-karat gold. The brand’s latest short film, titled “Love Is All,” and directed by young up-and-comer Charlotte Wales, features the likes of Troye Sivan, Willow Smith, Lily Collins, Maisie Williams, and Mariacarla Boscono dancing to a pop melody composed by Deep Purple bassist Roger Glover and Black Sabbath singer Ronnie James Dio in the 1970s. Filmed between Paris, Los Angeles, and Shanghai, the choral video brings together a number of what the brand calls “friends of the maison” for the first time—including Ella Balinska, Annabelle Walis, and Jackson Wang.