A WOMAN has revealed how she nearly died after an allergic reaction to eyebrow tint left her looking like a "Space Raider alien".

Nicola Tunstill, 34, from Newcastle upon Tyne, ended up in hospital with breathing difficulties after the dye caused her throat to swell up. 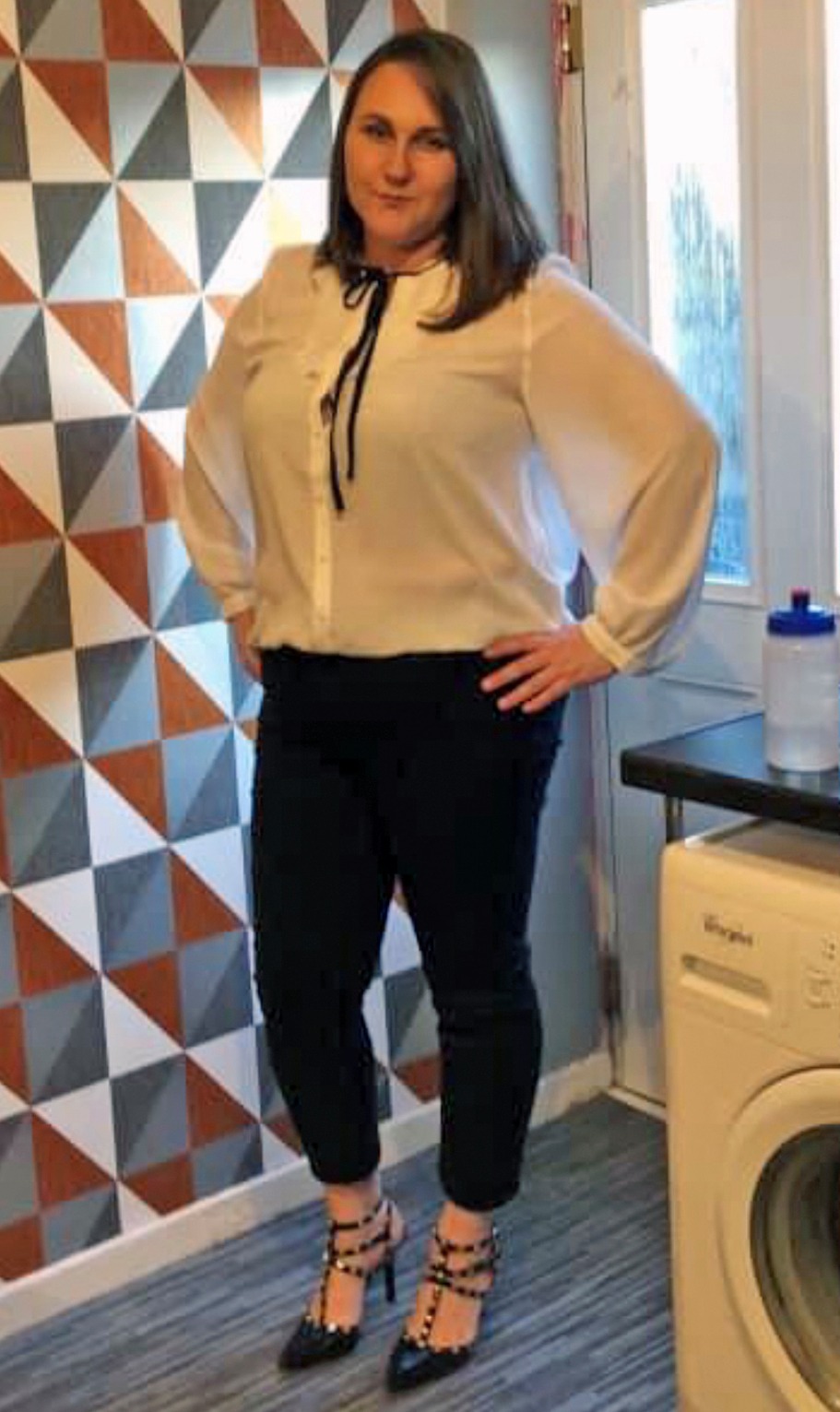 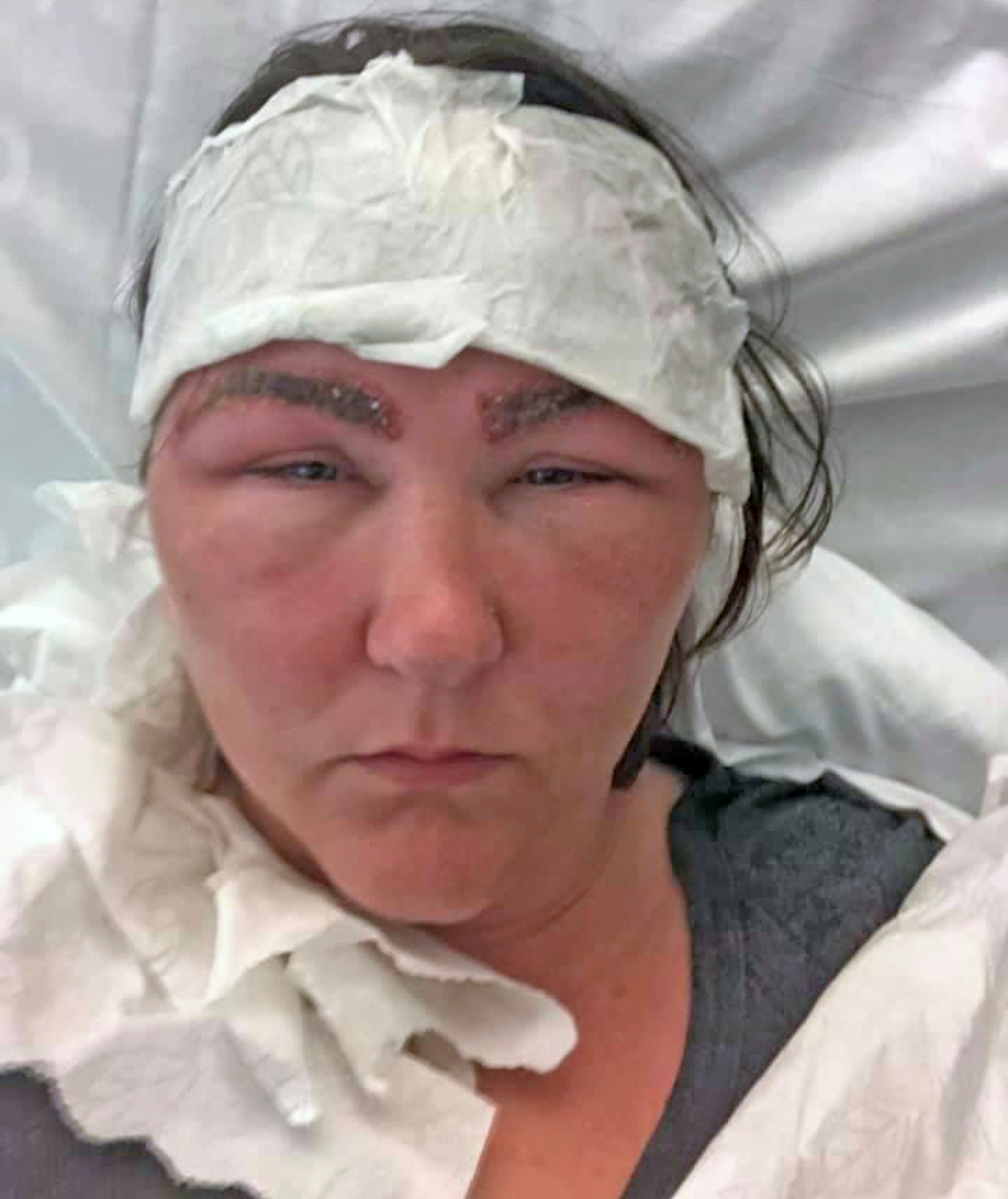 Before the procedure, she informed the salon that she had an allergy to paraphenylenediamine (PPD), a common chemical found in hair dye.

She was reassured that the tint was PPD-free, but later Nicola suffered an extreme allergic reaction that saw her face swell up and eyebrows burn.

Now, she is scarred for life and wants to urge others to always do a patch test.

Nicola, who is currently unemployed, says: "Salons should always carry out patch tests.

"They should be more aware about the dangers of PPD.

“It’s shocking that I told them that I was allergic to PPD, but they still went ahead and did the treatment anyway. No one should have to experience the trauma I went through.”

My entire face began to swell up again. I looked like a space raider alien 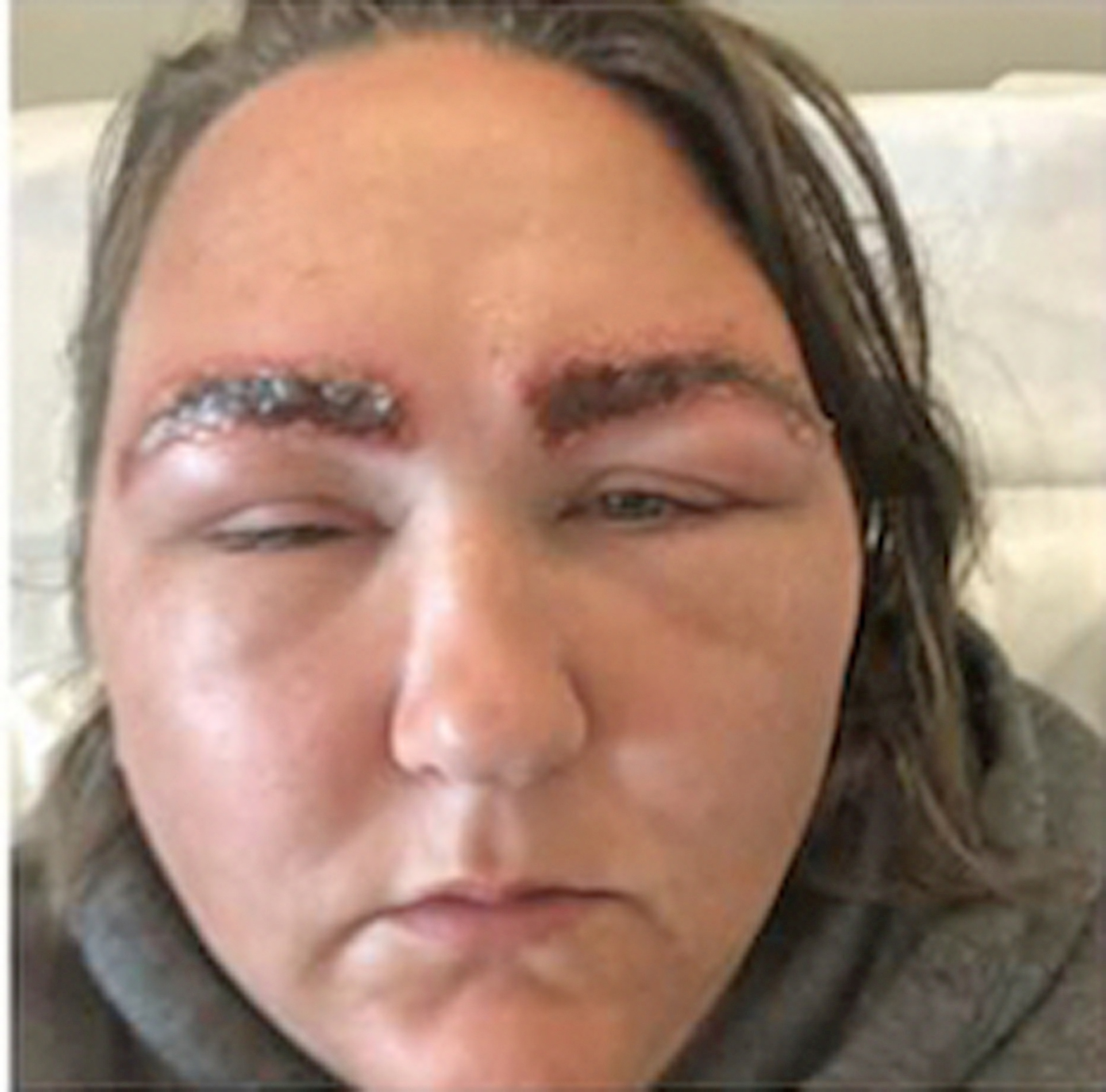 Nicola’s problems with PPD began in October 2011, when she got a black henna tattoo on her arm while holidaying in Dubai.

She says: “Right away, it was really itchy and red. I reacted to the PPD in the tattoo dye but didn’t realise it at the time.

"The symptoms stopped after a few weeks and the tattoo faded away.”

Nicola says: “I’d been dyeing my hair using box dyes since I was 15, so I thought I didn’t need to do a patch test.

“But this time, as soon as I applied the product, my head felt like it was on fire so I washed it out right away. 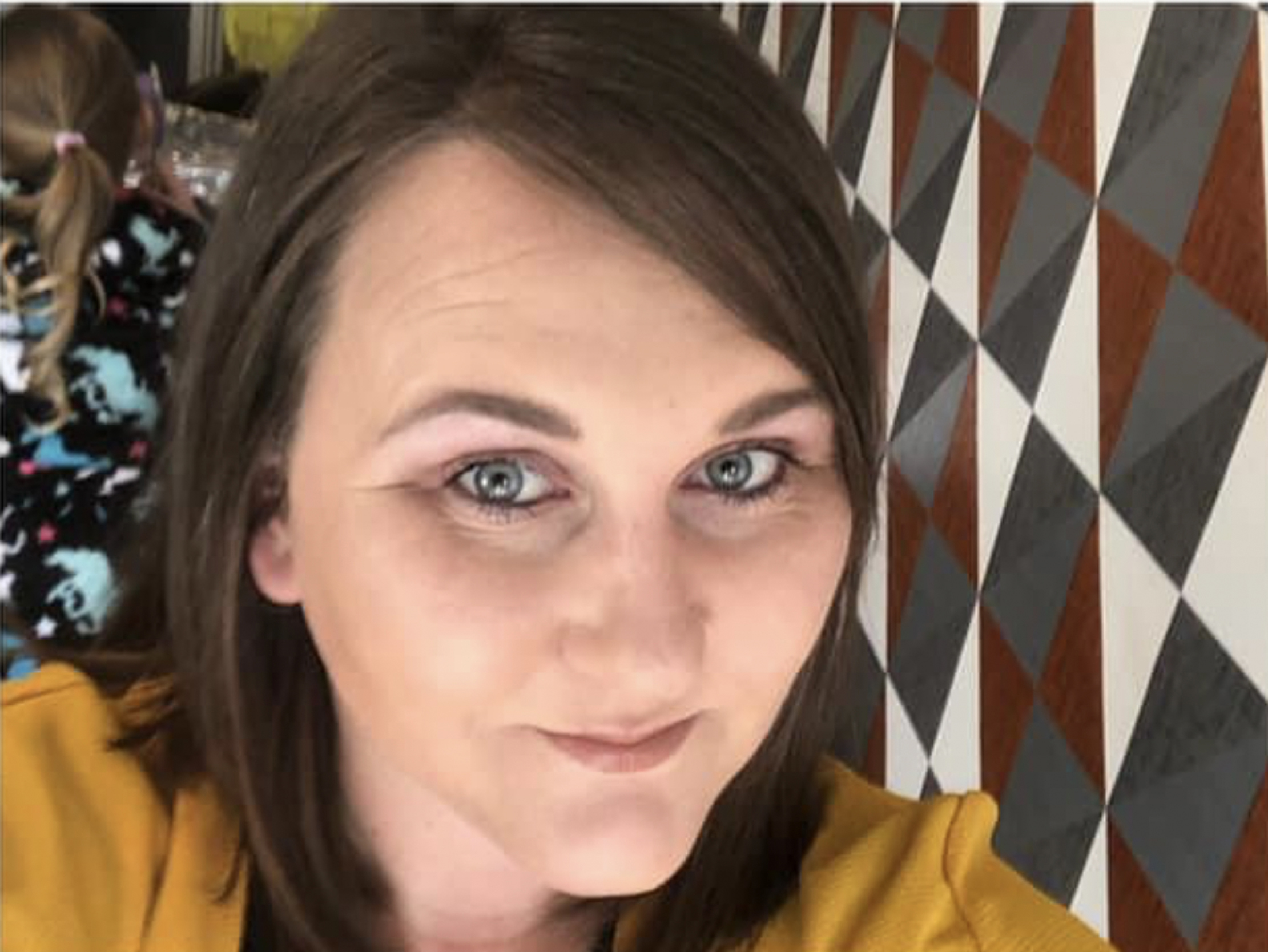 “Within half an hour, my scalp started oozing pus. I was terrified.”

The next day, Nicola visited her GP and discovered she was allergic to PPD.

She says: “They explained I’d developed the allergy due to the black henna tattoo.

“After that, I stopped dyeing my hair and embraced my natural brunette locks.”

Seven years later, in June 2019, Nicola visited a salon to get her eyelashes curled.

While there, the beautician offered her an eyebrow tint, costing £50.

Nicola says: “My brows were light brown and thin, so I was keen to make them look fuller.

“I told the lady I was allergic to PPD and reminded them I’d filled in a medical card a year earlier, that explained I'd had an allergic reaction in the past.

"She said the product she was using was completely different from hair dye and was PPD-free.

“She said I’d be fine and wasn’t at risk of having a allergic reaction. I had the procedure done and they looked great.”

However, later that evening, Nicola’s eyebrows started to swell and she began to experience a burning sensation.

She says: “I put some cooling gel pads on them and hoped they'd go down overnight.

“But when I woke up in the morning, they’d scabbed over and felt like they were on fire. My whole face was itchy too.

“By the evening, my left eye had swelled shut, so my friend drove me to A&E.”

Hair dye reactions and patch tests: what you need to know

Many permanent and semi-permanent hair dyes contain a chemical called paraphenylenediamine (PPD) -which is the culprit in most allergic reactions.

Your risk is increased if you've ever had a black henna tattoo or if you've reacted before, even if it was mild first-time round.

You should always have a patch test before dying your hair – by dabbing some of the dye behind your ear or on your inner elbow and leaving for 24 hours.

If you have any irritation, do not use the product.

Early signs of an allergic reaction include:

You can buy PPD-free hair dyes, but even these can trigger reactions, so you should still take a patch test.

Doctors at Northumbria Specialist Emergency Care Hospital told Nicola she was having an allergic reaction to PPD and hooked her up to an antibiotic drip.

She was also given painkillers, and steroids to reduce the swelling.

Nicola says: “I couldn’t believe the eyebrow tint had PPD in it. I was so angry at the salon for not checking properly.”

The next day, she was discharged from hospital.

Nicola says: “My forehead was still swollen and itchy, but I’d promised to spend the afternoon at the zoo with my friend and didn’t want to let her down.

“When we arrived, my eyebrows looked like big red slugs and they were leaking pus.

“My entire face began to swell up again. I looked like a Space Raider alien. Everyone at the zoo stared at me in horror.” 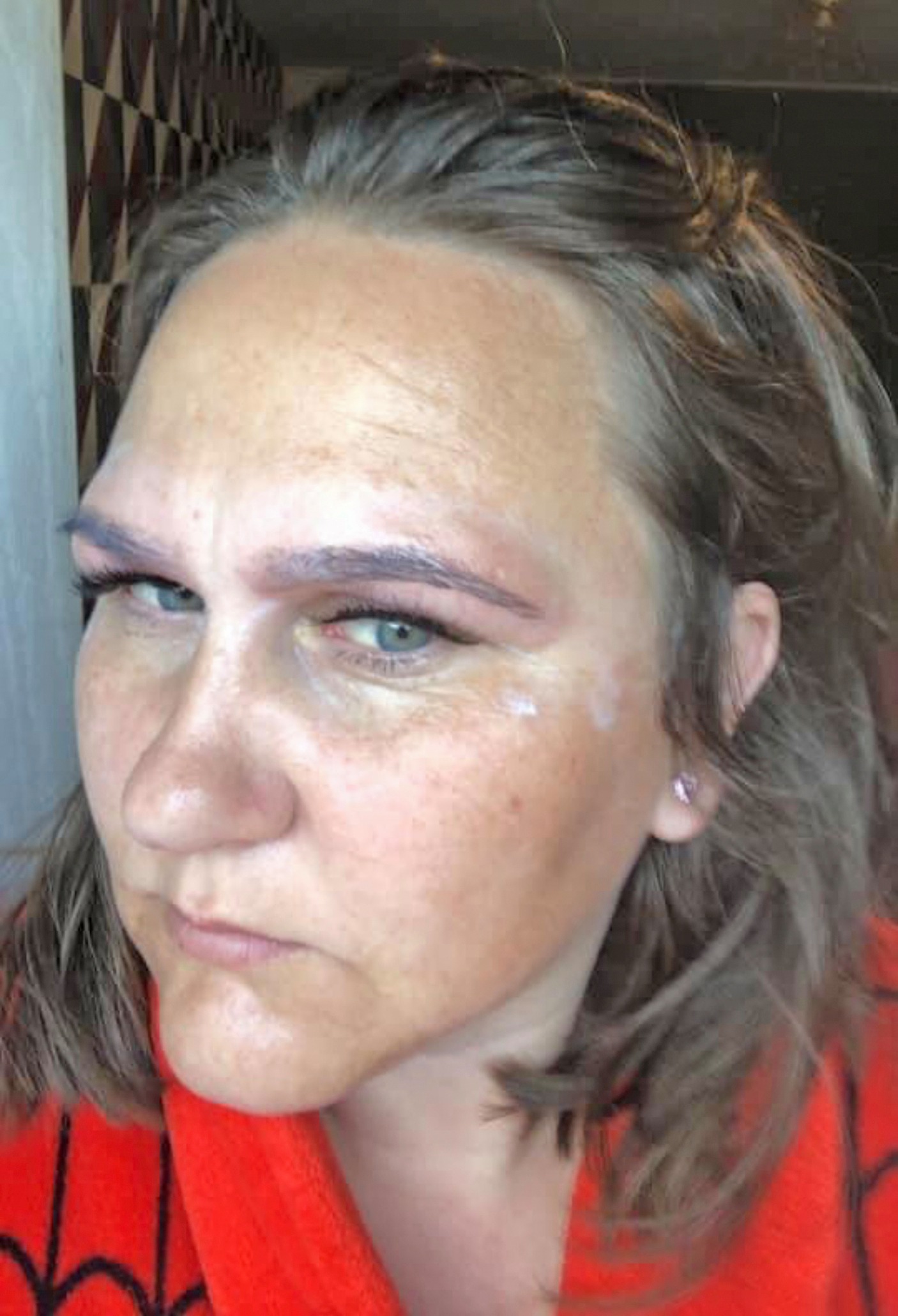 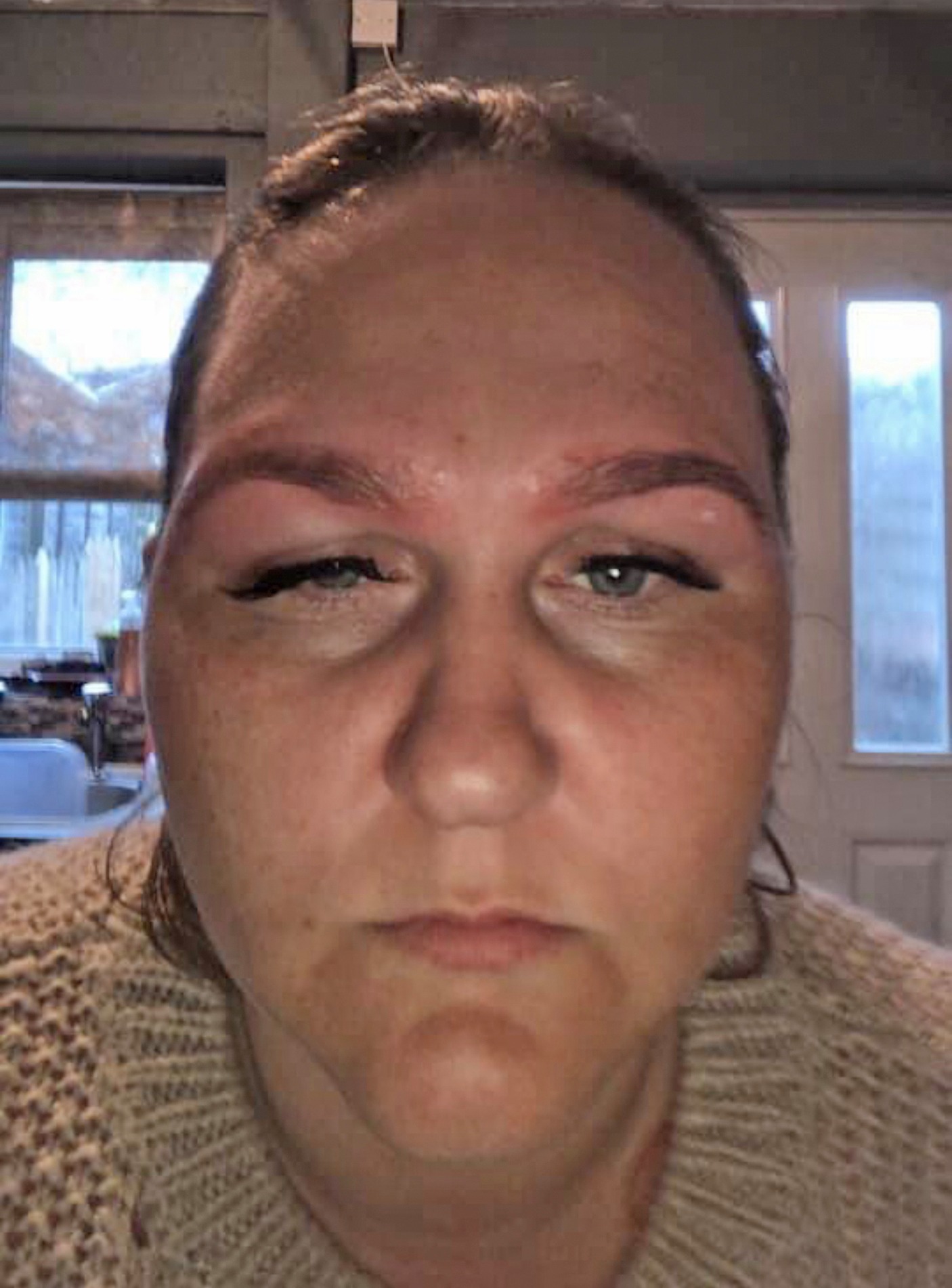 That evening, Nicola returned to A&E, where her throat began to swell.

She says: “They administered another IV full of steroids and painkillers. But an hour later, I was barely conscious from all the medication.

“They were concerned about my airways closing up altogether if the swelling in my throat didn’t reduce. They admitted me to the trauma ward.”

While she was in hospital, Nicola contacted the salon to complain and asked for a refund.

She says: “The salon told me that they couldn’t offer a refund and refused to admit any wrongdoing. I was livid.”

During the next five days, doctors stabilised Nicola and she finally returned home.

Nicola adds: “I had no eyebrows as they’d been burnt off and there were holes in my skin.

"I was so embarrassed and I lost all my self-esteem. It took three months for them to grow back.”

Later that week, Nicola contacted the salon again and threatened to sue them. 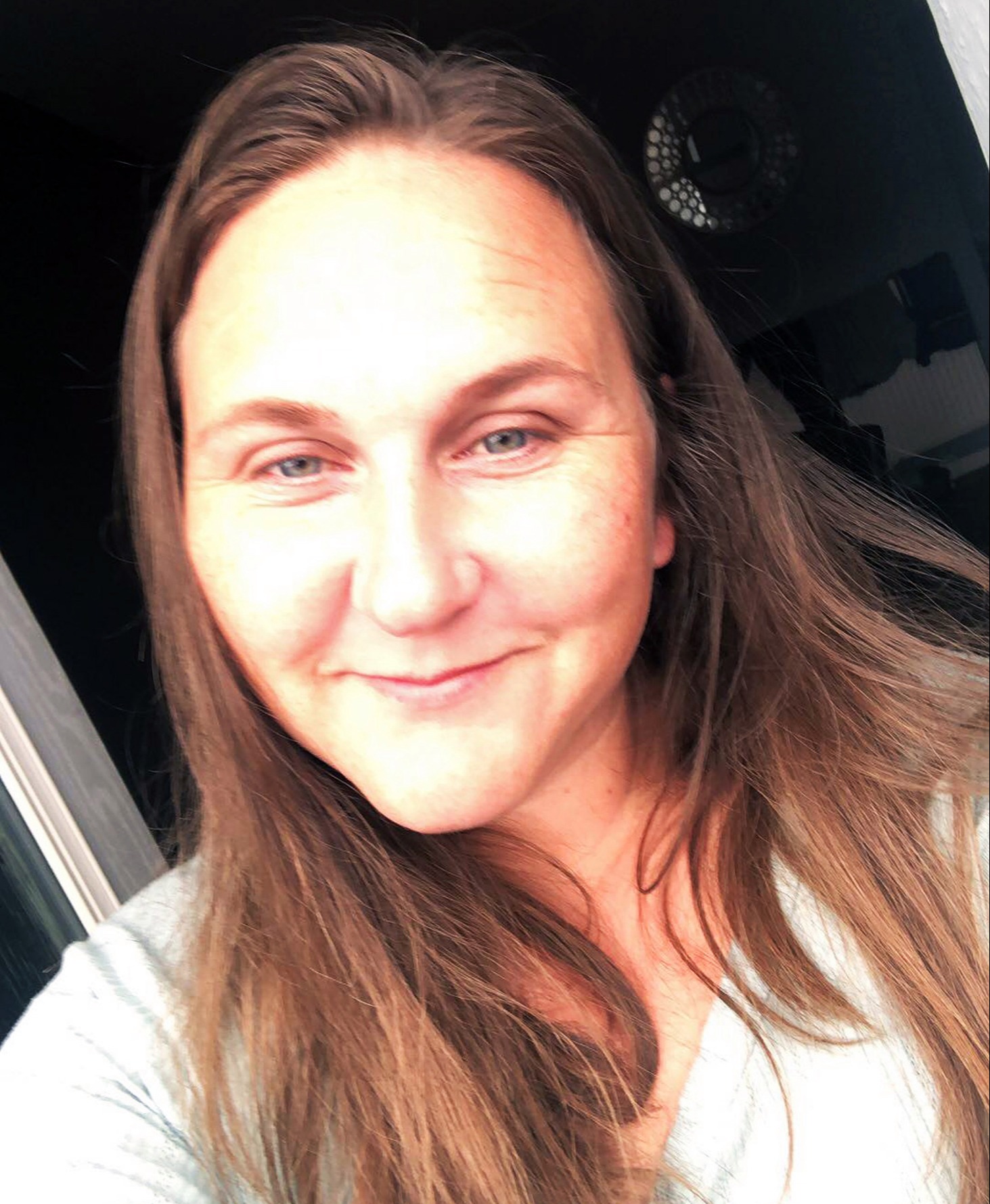 Eventually, the salon paid her £500 as a goodwill gesture.

Nicola says: “Now, I have light pink scars on my eyebrows and there are gaps in the hair.

“Salons should be more aware about the risk of PPD and the importance of patch tests.