Asking for wedding gifts is one thing, but this bride-to-be has taken it one step further, by cashing in before her big day. 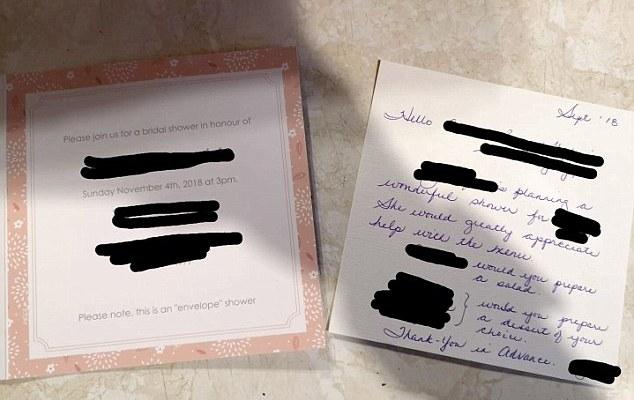 And that's not all – guests are also being asked to provide the food, adding to the expense of the whole thing.

The "classless" handwritten invite, which asks for cash by describing it as an "envelope party", has sparked a fierce debate on an Aussie Facebook group.

Slamming her relatives for their cheeky demands, the woman said: "I'm pretty sure the MOB (mother of the bride) wrote/made these… There's no way my cousin would be that tacky."

Of the request to bring a salad and a dessert to the 'do next Sunday, she added: "I personally don't think potlucks are a wedding/bridal shower thing. 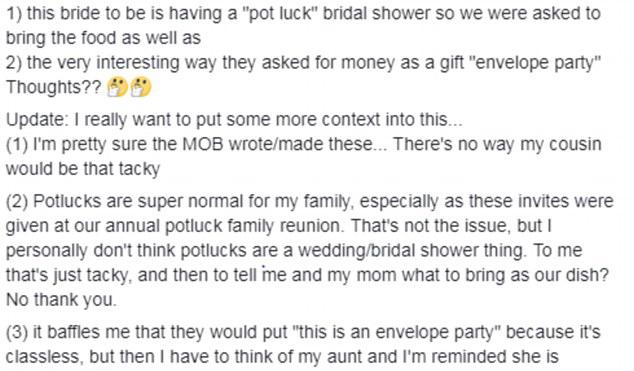 "To me that's just tacky, and then to tell me and my mom what to bring as our dish? No thank you.

"It baffles me that they would put 'this is an envelope party' because it's classless".

The invite has created quite a stir on social media, where commenters slammed it as "horrifying" and "tacky". "It's a NO!" wrote one user. "They should at least feed you if you are asked to bring money to an envelope in a shower.

"I’m happy to bring a dish, especially if it’s a close friend but… I’m feeling a strong NO!"

While a third commented: "So they want your money and they also don’t want to supply the party and expect the guests to do that too?

"I would laugh at this and the person who gave it to me."

While this bride-to-be was dumped on her WEDDING DAY, and people are outraged.