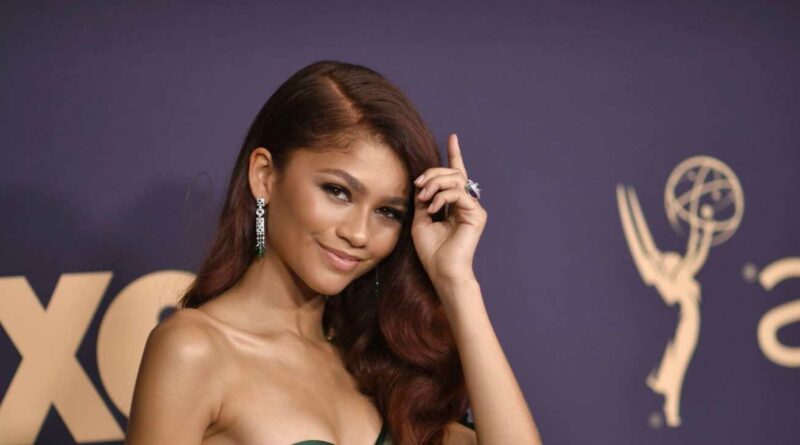 From Disney darling to history-making Emmy-winner, Zendaya has done a lot in her first 25 years. To celebrate the actress, singer and fashion star’s 25th birthday on Sept. 1, 2021, Wonderwall.com is taking a look at her best edgiest and most playful moments, many of them put together by her longtime stylist, Law Roach… starting with this stunning creation she wore to the 2019 Primetime Emmy Awards. The “Euphoria” and “Spider-Man” franchise star looked breathtaking in the dark green custom gown by Vera Wang featuring a sweetheart neckline and a sheer-illusion boned bodice. She channeled Old Hollywood with her wavy, long red locks and glamorous Cartier jewels. Keep reading for more…

RELATED: Fashion hits and misses for celebs born in September

In 2019 while promoting the release of “Spider-Man: Far From Home,” Zendaya donned the superhero’s signature colors! She hit the red carpet at the film’s Hollywood premiere in this gorgeous black-and-red sequined gown by Armani Prive, which she paired with Christian Louboutin pumps.

What can’t Zendaya pull off? At the 2020 Critics’ Choice Awards, the forder Disney star opted for a two-piece fuchsia look from Tom Ford’s spring 2020 collection. The ensemble featured an asymmetrical cropped molded breastplate paired with a floor-length skirt.

RELATED: Kim Cattrall and Sarah Jessica Parker plus more co-stars who didn’t get along

This is definitely Z’s color! For the 2021 Academy Awards, Zendaya donned a strapless bright yellow gown by Valentino Haute Couture that featured a below-the-bust cut-out and an elegant train. As for her jewels? Zendaya accessorized with for 183.3 carats of Bulgari gemstones worth an estimated $6 million.

At the Âme Jewelry launch in 2018, Zendaya brought all the fluff! The “Euphoria” star sported this voluminous tiered orange-and-pink confection by Marc Jacobs, which she paired with pumps by Christian Louboutin and jewels by Âme.

Zendaya played with bold hues when she attended the “Space Jam: A New Legacy” Los Angeles film premiere in 2021 in a colorblocked blouse-and-shorts combo from the 2022 Moschino Resort collection. As for her accessories? She donned jewels by Bulgari and white pumps by Christian Louboutin.

A Balmain beauty! At the “Spider-Man: Far From Home” premiere afterparty in 2019, Zendaya wore this beautifully tiered olive gown by Balmain. From the flattering cut-outs to the elegant high-neck, she looked look an absolute dream.

Celebrities are known for wearing extravagant, elaborate and often unexpected ensembles at the annual Met Gala. For 2018’s “Heavenly Bodies: Fashion and The Catholic Imagination”-themed benefit, Zendaya arrived in this standout Joan of Arc-inspired gown by Versace. From its chainmail armor detailing to its spiked belt, the ensemble was a total medieval dream.

The elegant pale pink Vivienne Westwood slip gown that Zendaya wore to the 2015 Academy Awards was anything but edgy, but her dreadlocks were at the center of a controversy. After “Fashion Police” host Giuliana Rancic joked that Zendaya probably smelled like “patchouli oil” or “weed,” Zendaya slammed the host. “There is a fine line between what is funny and disrespectful,” she wrote on Instagram. “Someone said something about my hair at the Oscars that left me in awe. Not because I was relishing in rave outfit reviews, but because I was hit with ignorant slurs and pure disrespect…”

Zendaya was unveiled as the newest ambassador of Lancôme’s Idôle fragrance in 2019, and to celebrate, she wore a rose pink confection from Georges Hobeika’s Resort 2019 collection. The gown, which featured a dramatic deep-V neckline, was equal parts sweet and sensual. She completed the look with complementary metallic gold heels and Chopard jewels from the Haute Joaillerie Collection.

We love us some tiered lace! For 2019’s Vanity Fair and Lancôme Toast to Women in Hollywood event, Zendaya wore a red off-the-shoulder gown by Alexis Mabille that featured a stunning satin shawl resembling a large bow.

Fierce in Fendi! At the launch of the luxury fashion house’s Spring 2020 collection with Solar Dream at an interactive pop-up installation in New York City, Zendaya donned a look straight from the Fendi runway. The “Spider-Man: Far From Home” actress’s ensembleexuded a retro-chic vibe, from the oversized and relaxed cardigan to the checkered blouse and shorts. She finished off the coordinating ensemble with knee-high boots by Christian Louboutin.

In 2019, Zendaya opted for this floral confection by Alexandre Vauthier for HBO’s Primetime Emmys afterparty. The strapless high-low puffball number was both playful and feminine.

Sure, stunning gowns are eye candy, but so is this crisp grey ensemble that Zendaya wore to the 2019 Elle Women in Hollywood event. The actress, who also gave a speech that evening, opted for an ultra-chic menswear-inspired outfit that consisted of a blazer and pants, a button-up blouse, a skirt, and a long belt.

In 2020, Zendaya arrived at Bulgari’s launch event for its B.zero1 Rock collection in an incredibly chic look — a sultry deep-V shirt dress by Rahul Mishra that featured a sash belting ethereal embroidery. The piece was complemented by black trousers and diamonds by — you guessed it — Bulgari.

We love a bold-shoulder silhouette! At the 2021 ESSENCE Black Women in Hollywood Awards, Zendaya turned heads in this 1982 periwinkle top by Yves Saint Laurent, which came from stylist Law Roch’s personal archive, and a black maxiskirt with a thigh-high slit. Fun fact: Zendaya’s top was originally a dress that belonged to Eunice Walker Johnson, the late Black businesswoman whose personal style played a pivotal role in fashion for Black women throughout the ’60s and ’70s.

The beauty is in the simplicity! For the 2019 E! People’s Choice Awards, this stunning Virgo opted for a sleek black gown with a twist. The one-shoulder ankle-length confection by Christopher Esber featured cut-outs at the waist and sparkling details along the edges. Zendaya kept her accessories to a minimum, donning diamond earrings and Christian Louboutin heels.

Zendaya went way over the top for the 2015 Metropolitan Museum of Art’s Costume Institute Benefit Gala celebrating “China: Through the Looking Glass” in New York City in a red-and-black Fausto Puglisi number with a daring structured skirt and gravity-defying train. Big sunburst embellishments added even more pizazz to the already out-there dress.

Zendaya dressed to impress for a great cause when she attended the Save the Children’s Centennial Gala in 2019. She opted for a crisp white suit from her Fall 2019 collection collaboration with Tommy Hilfiger. To bring more edge to the look, she wore the pantsuit sans shirt.

Zendaya wore a super-poofy Marchesa gown for the Weinstein Company’s pre-Oscar dinner in Los Angeles in 2016. Have you ever seen that much layered tulle and feather embellishment on one dress? 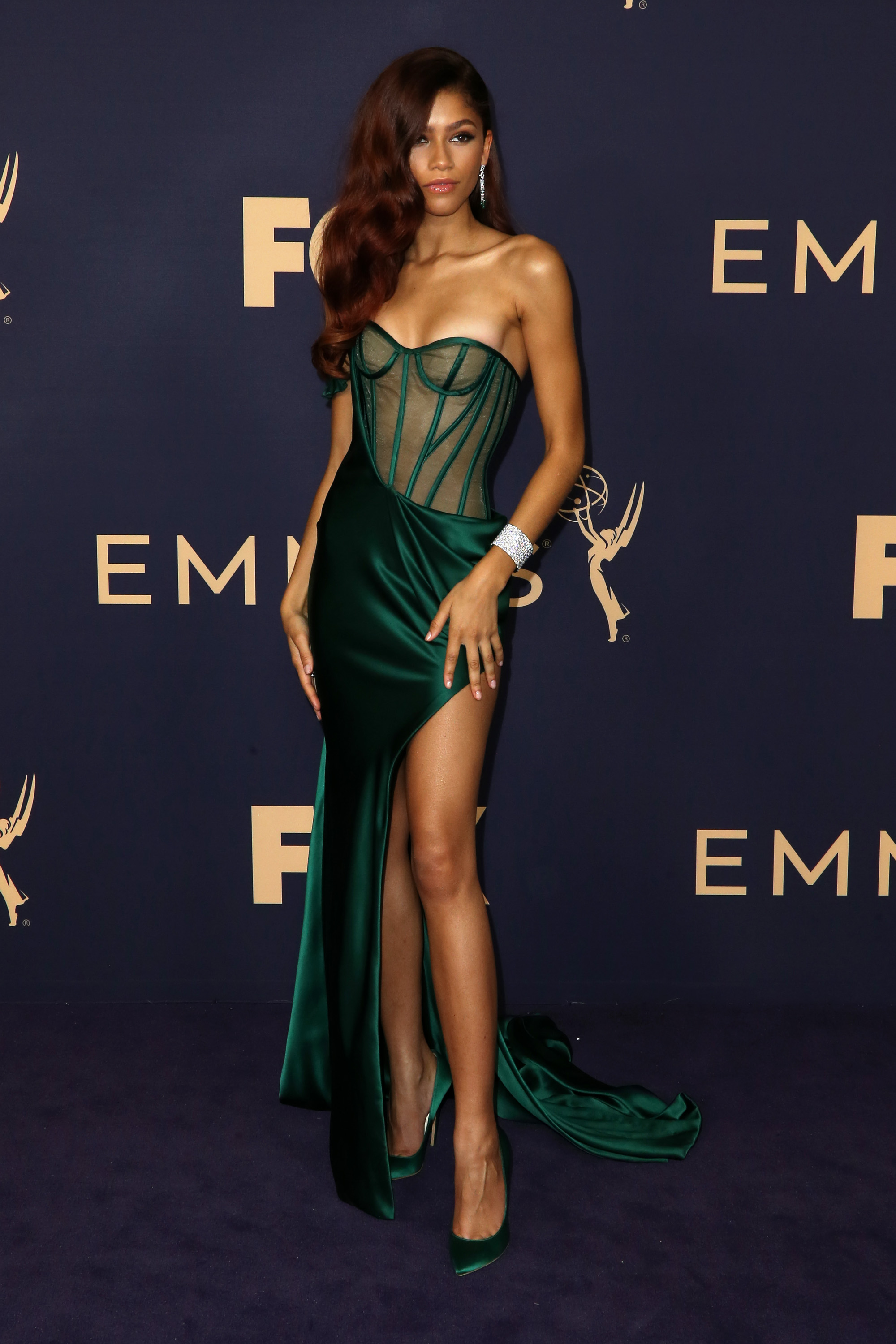 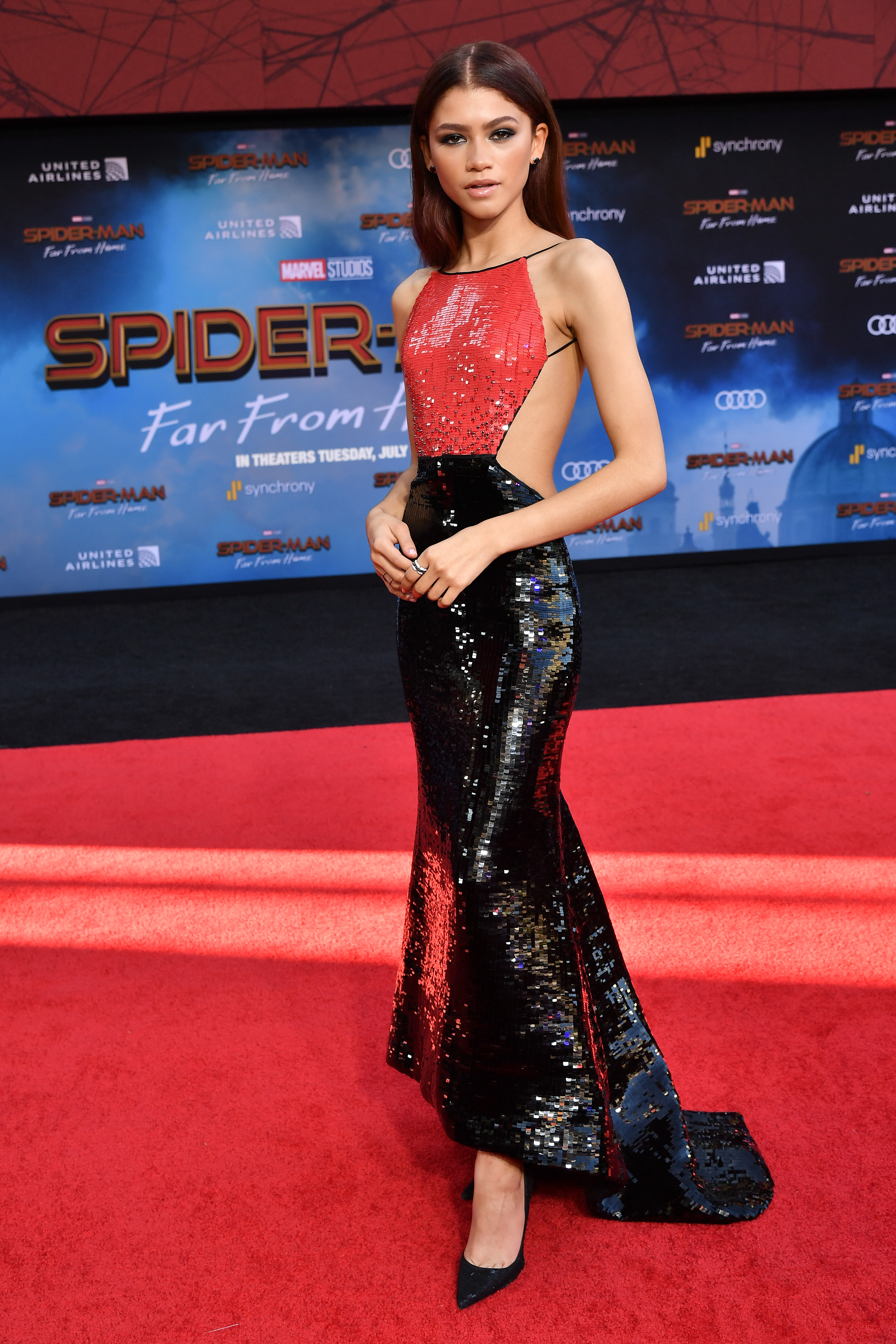 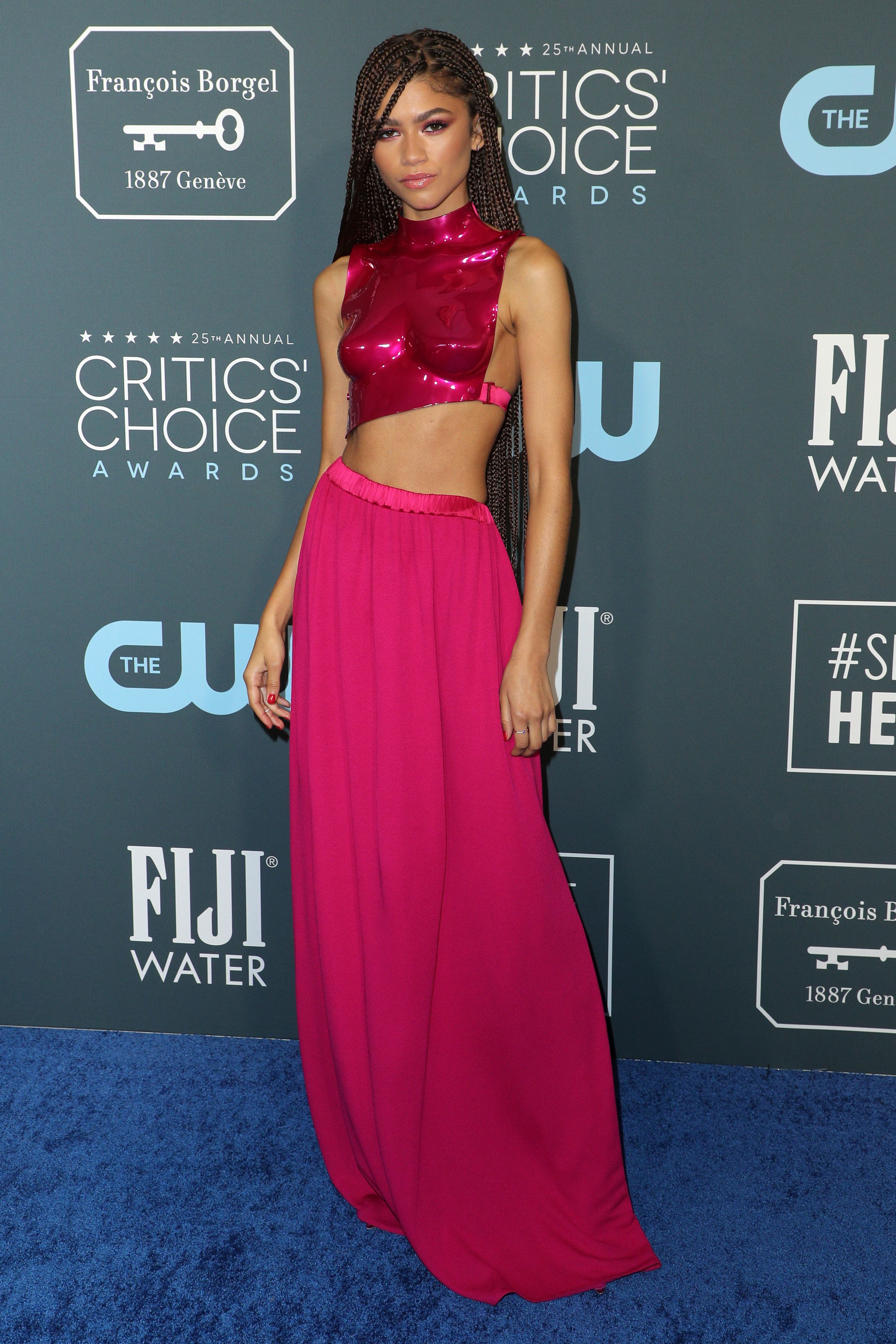 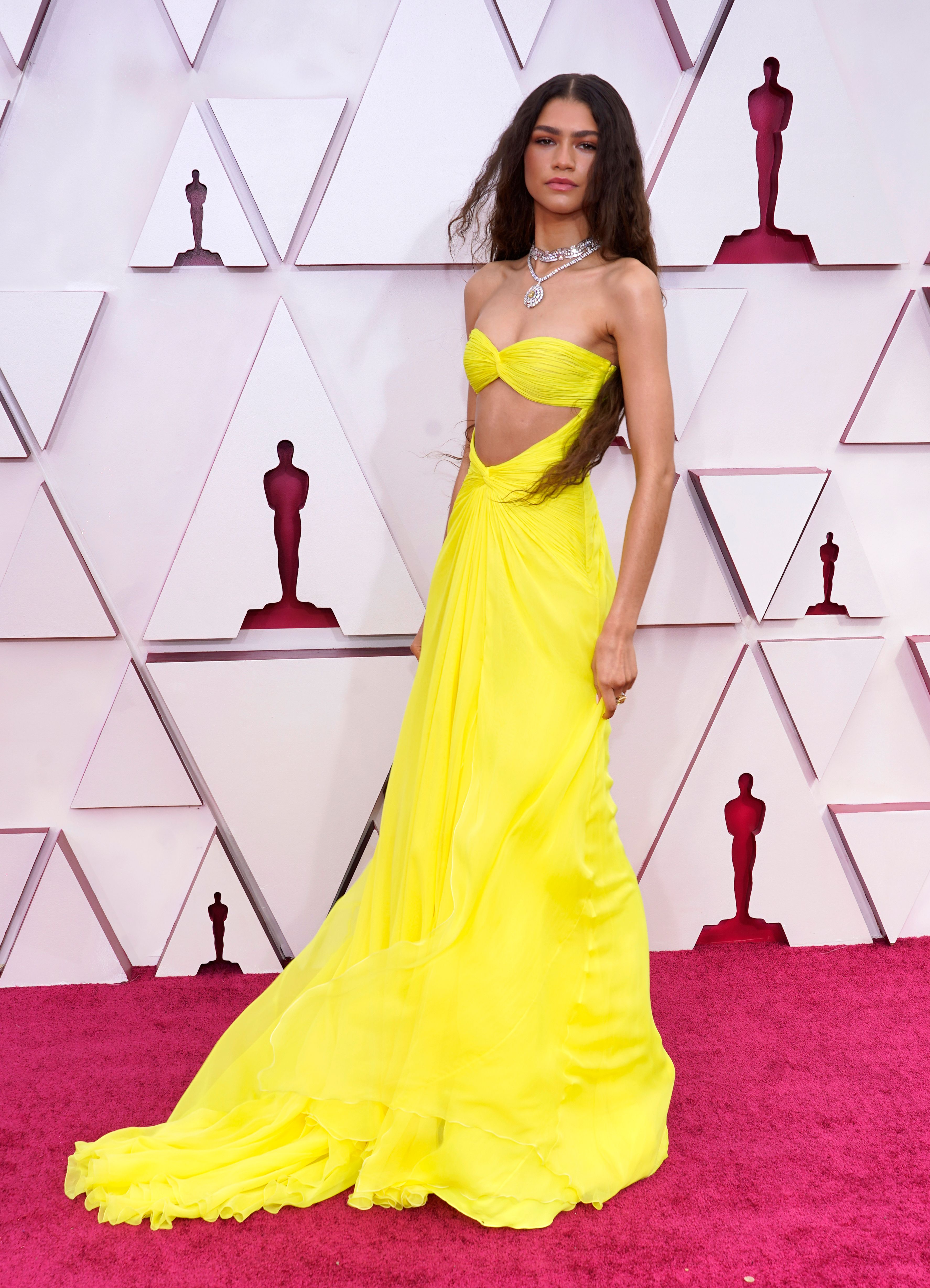 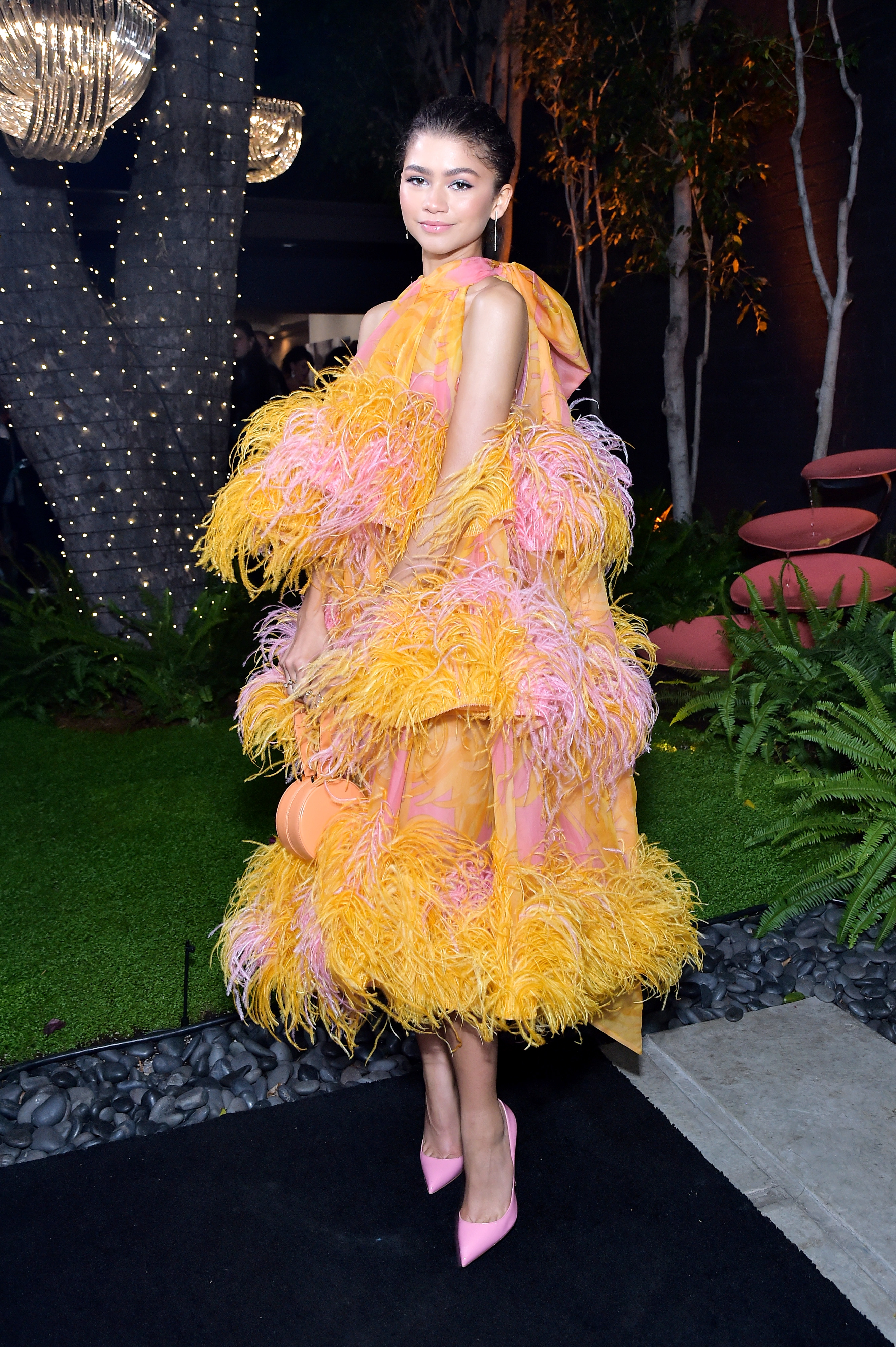 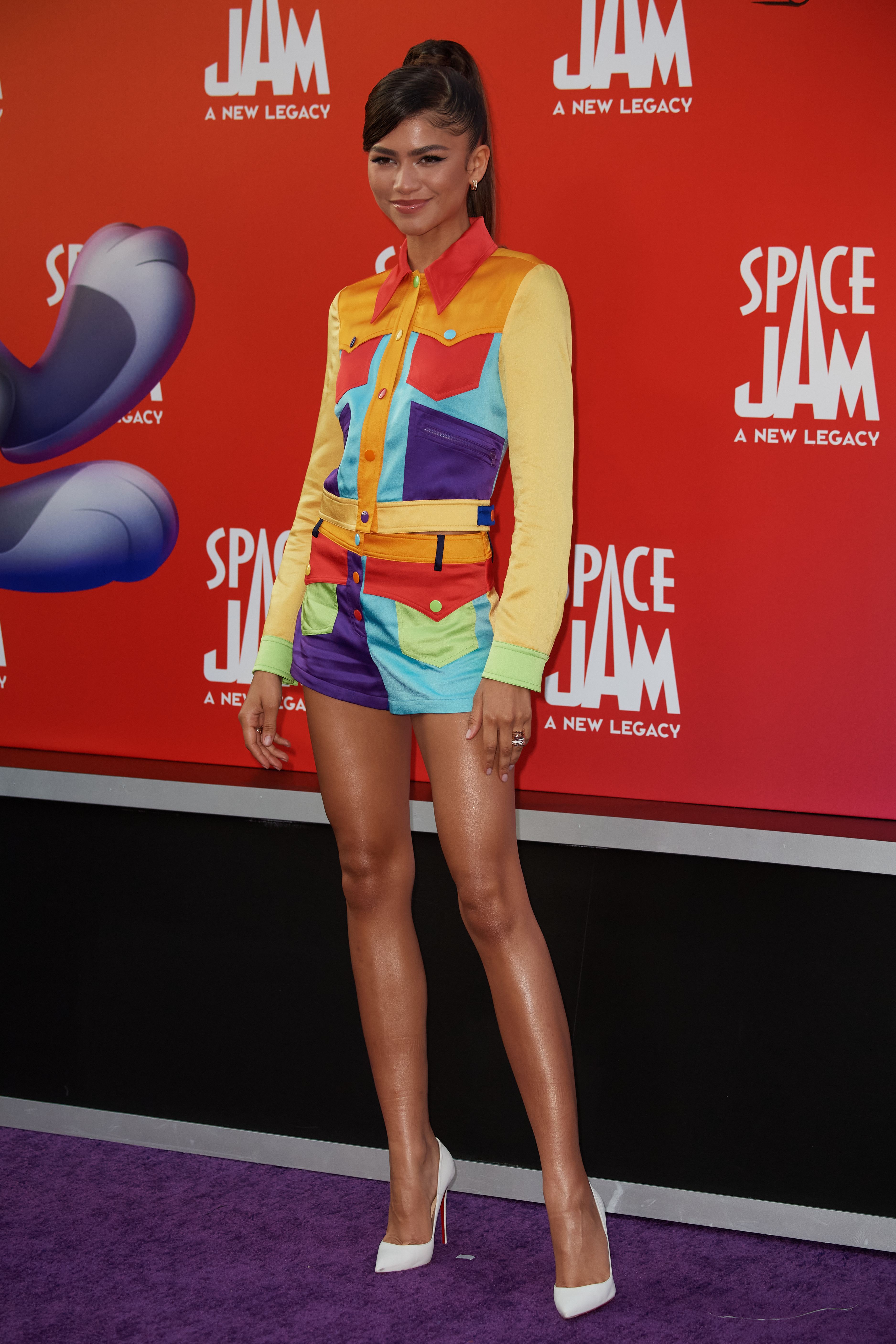 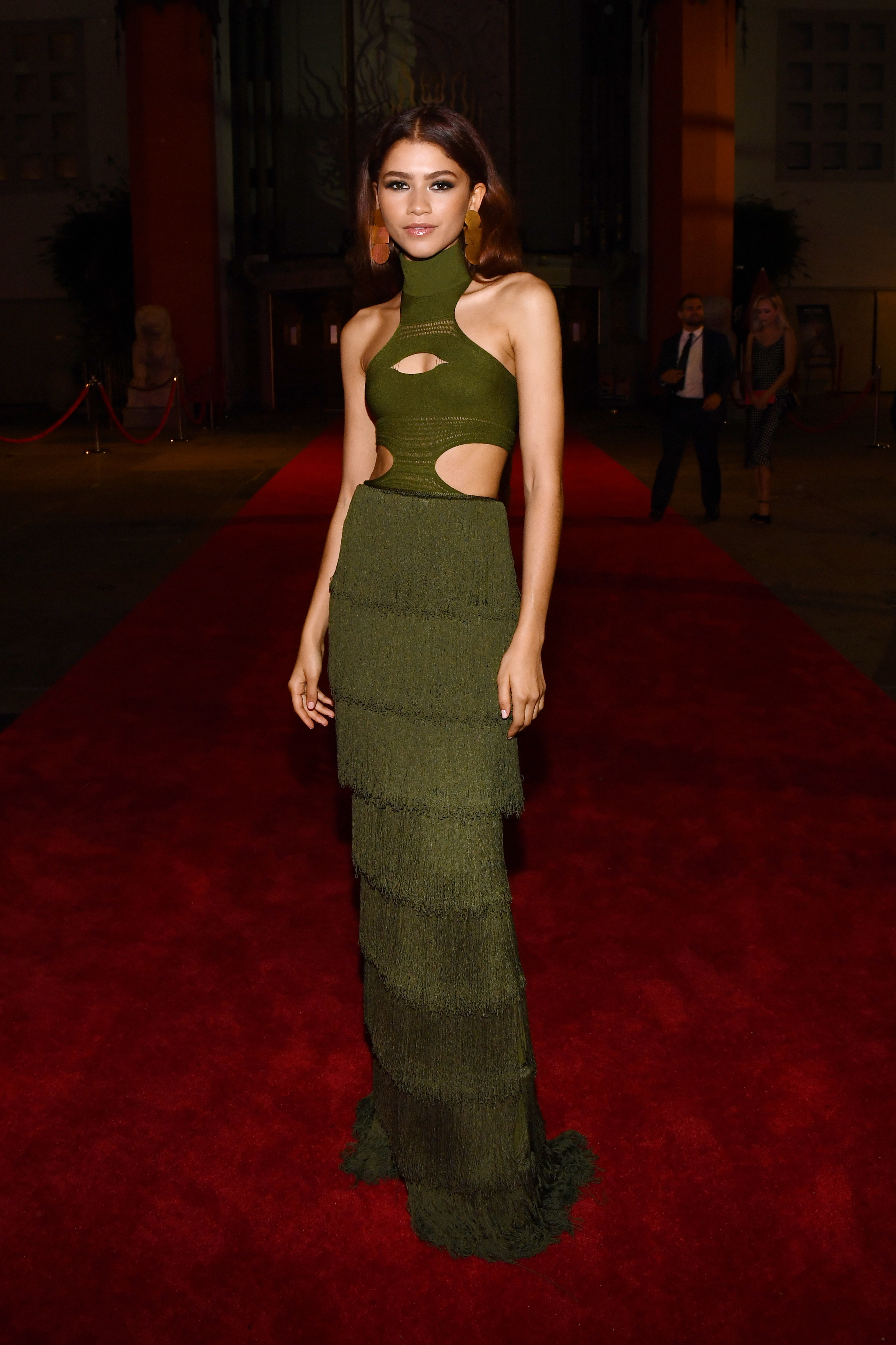 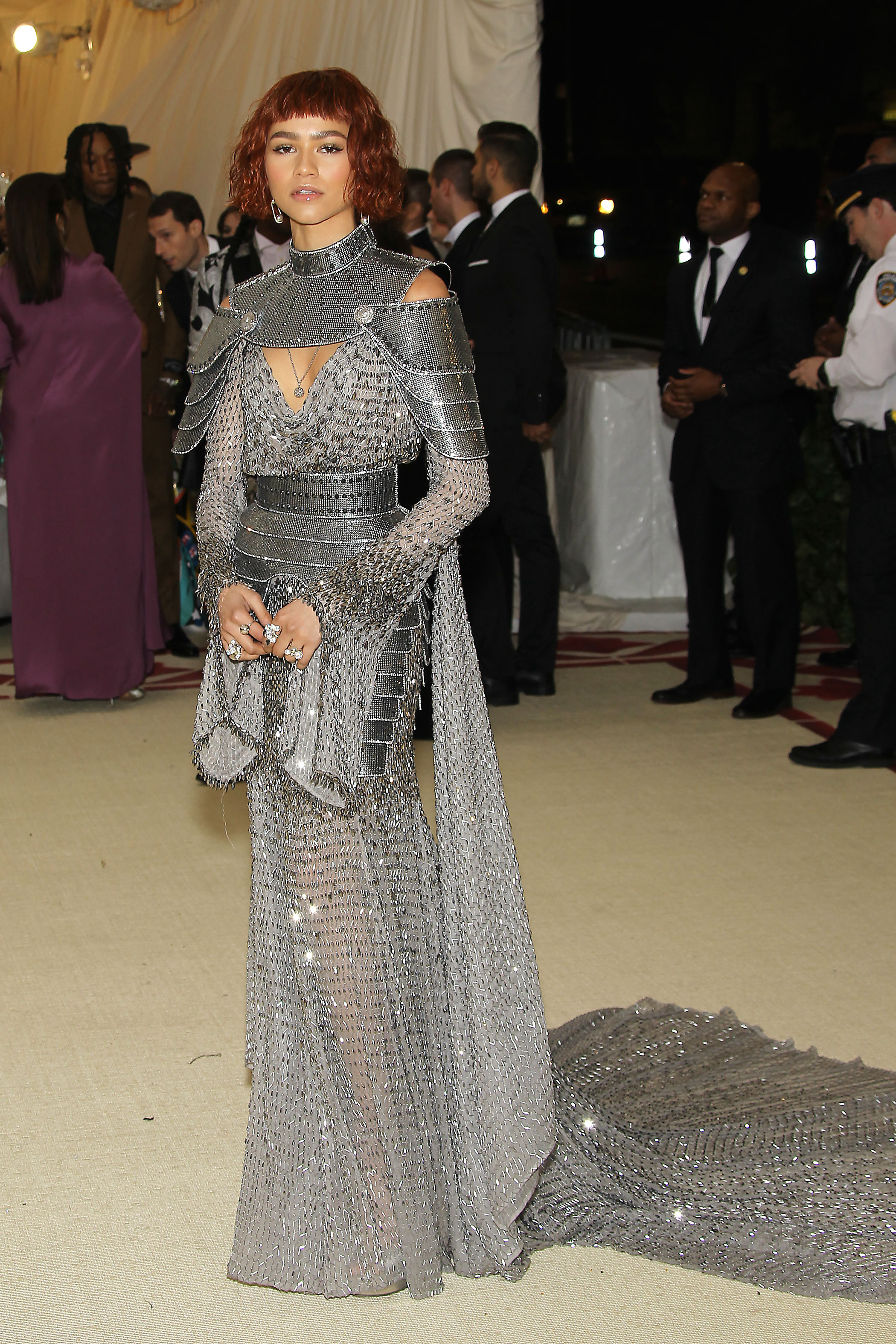 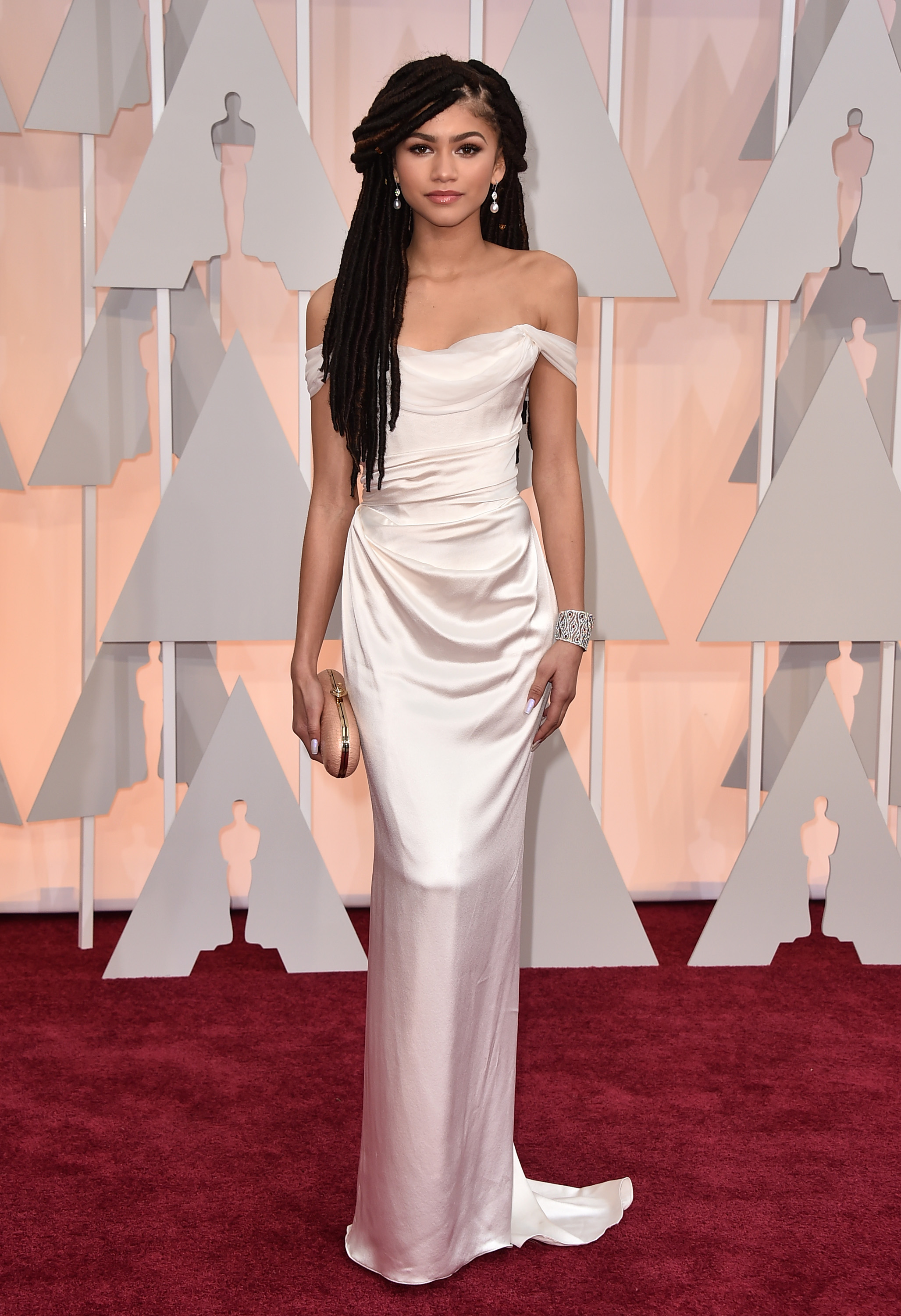 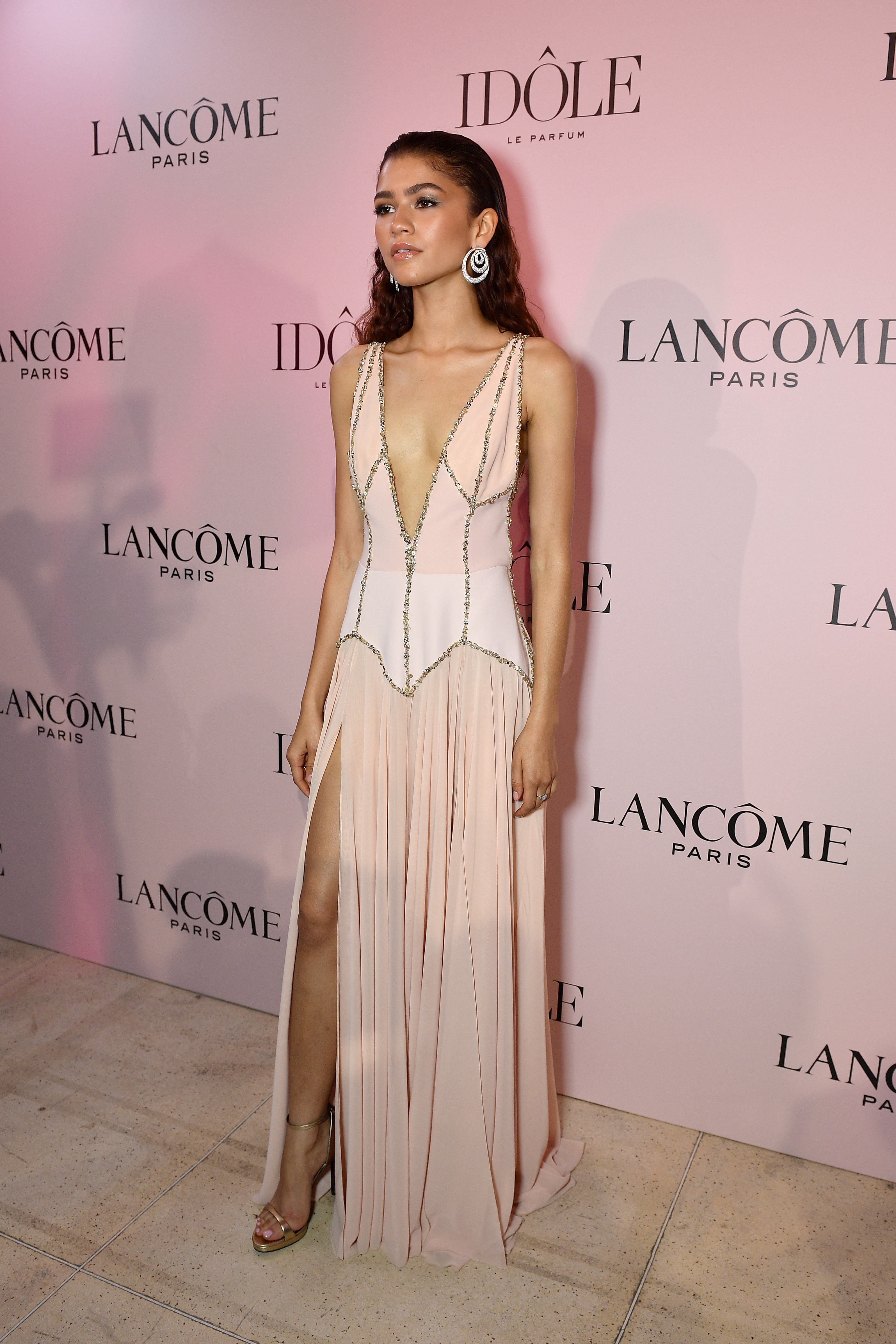 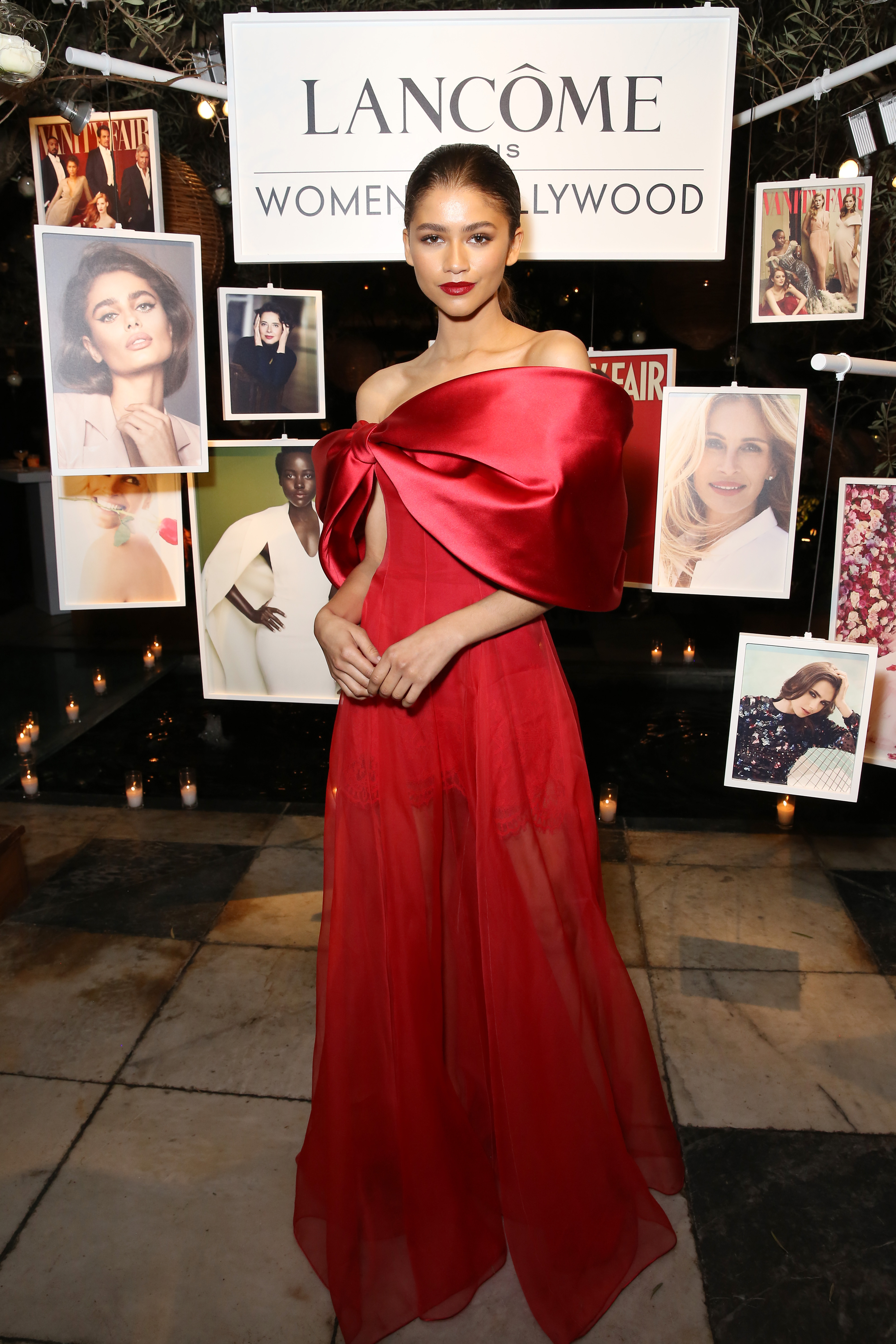 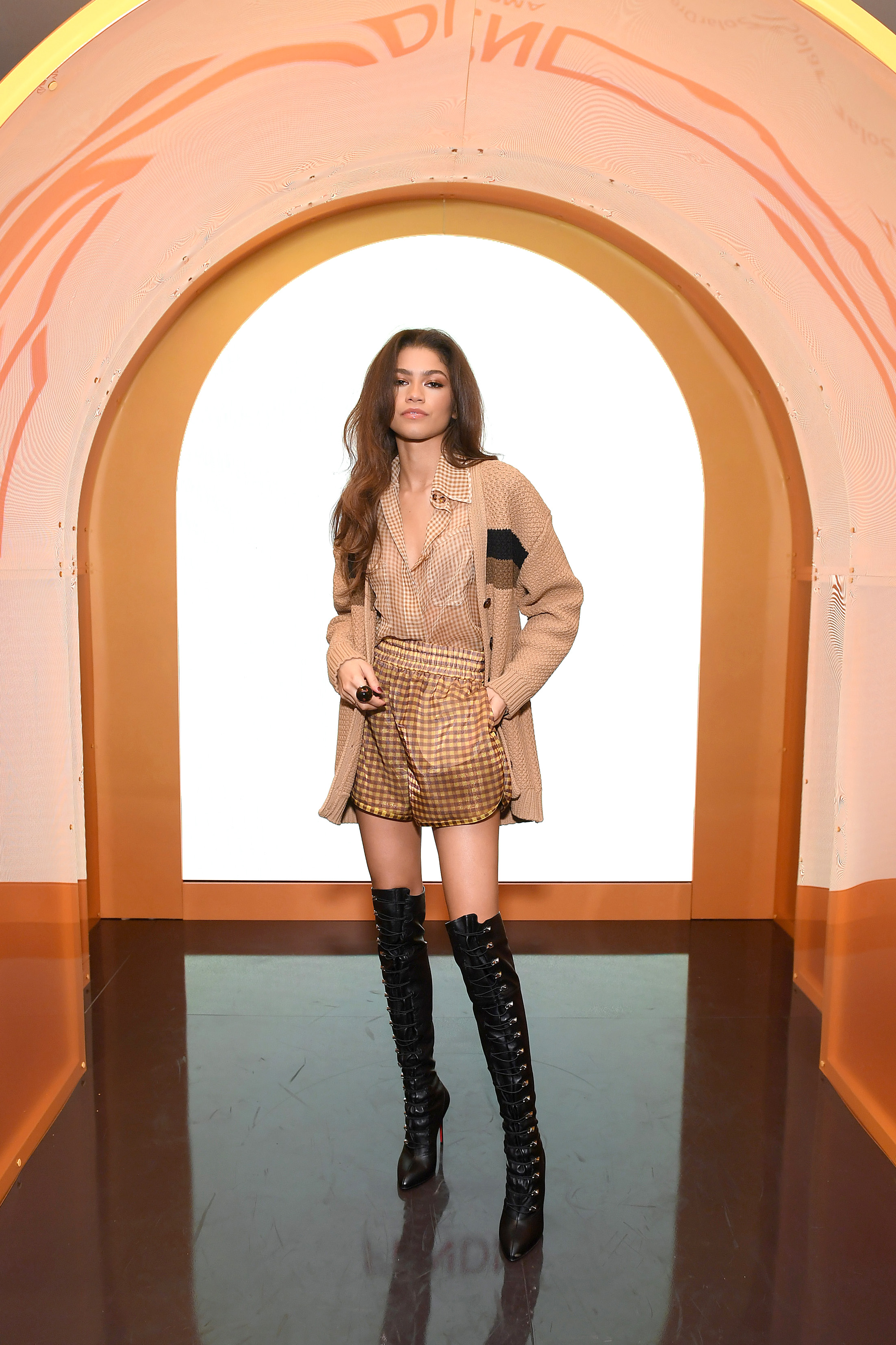 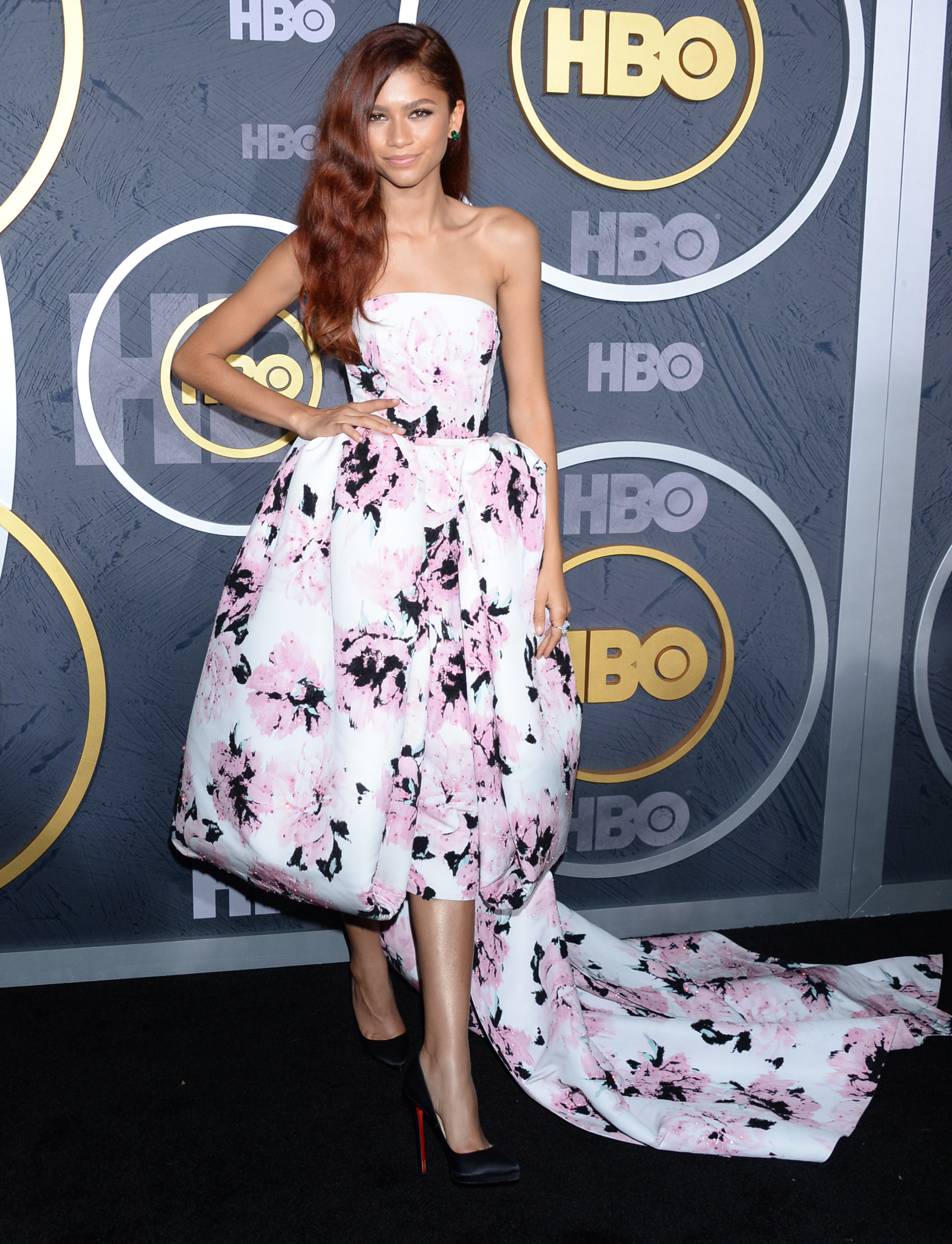 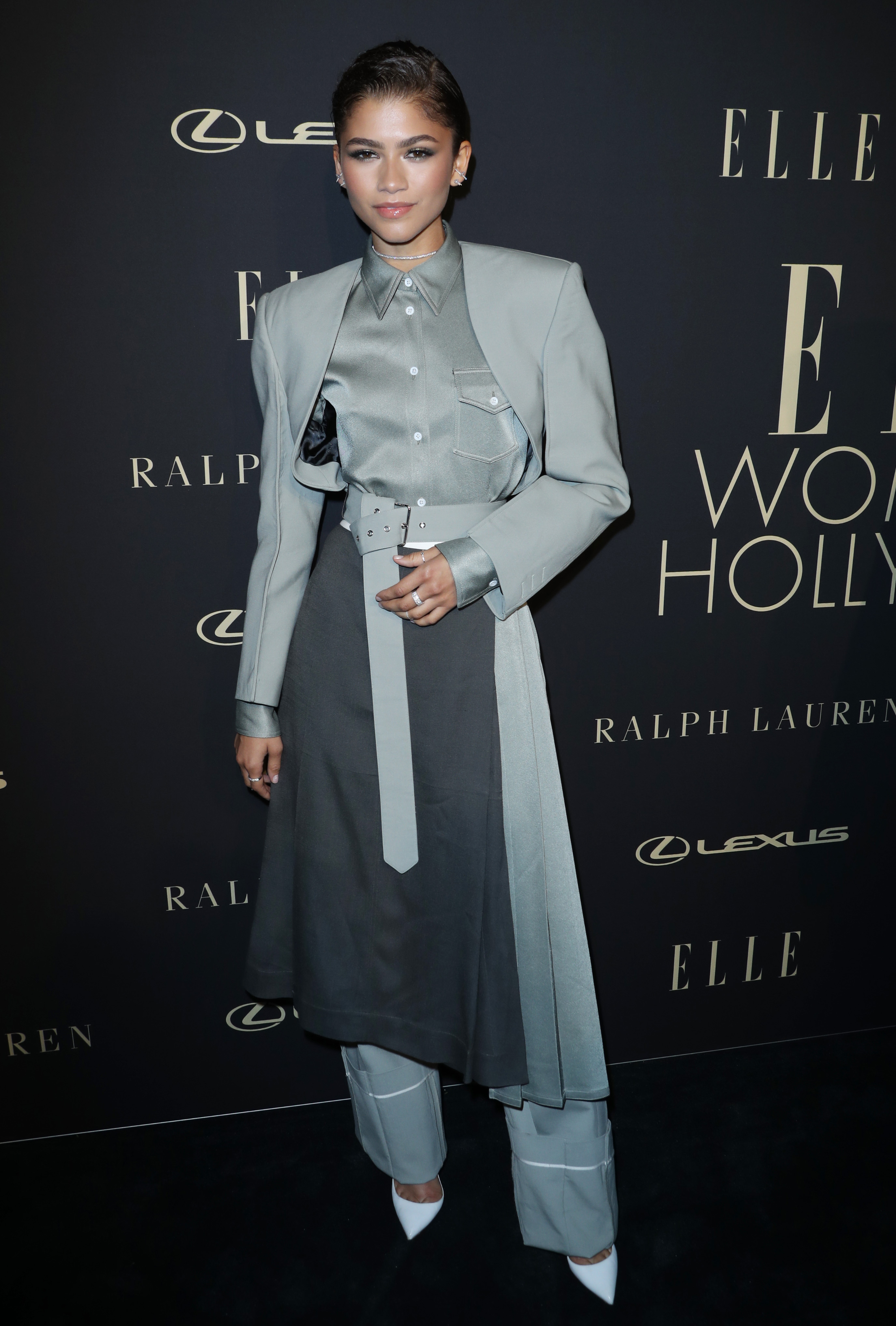 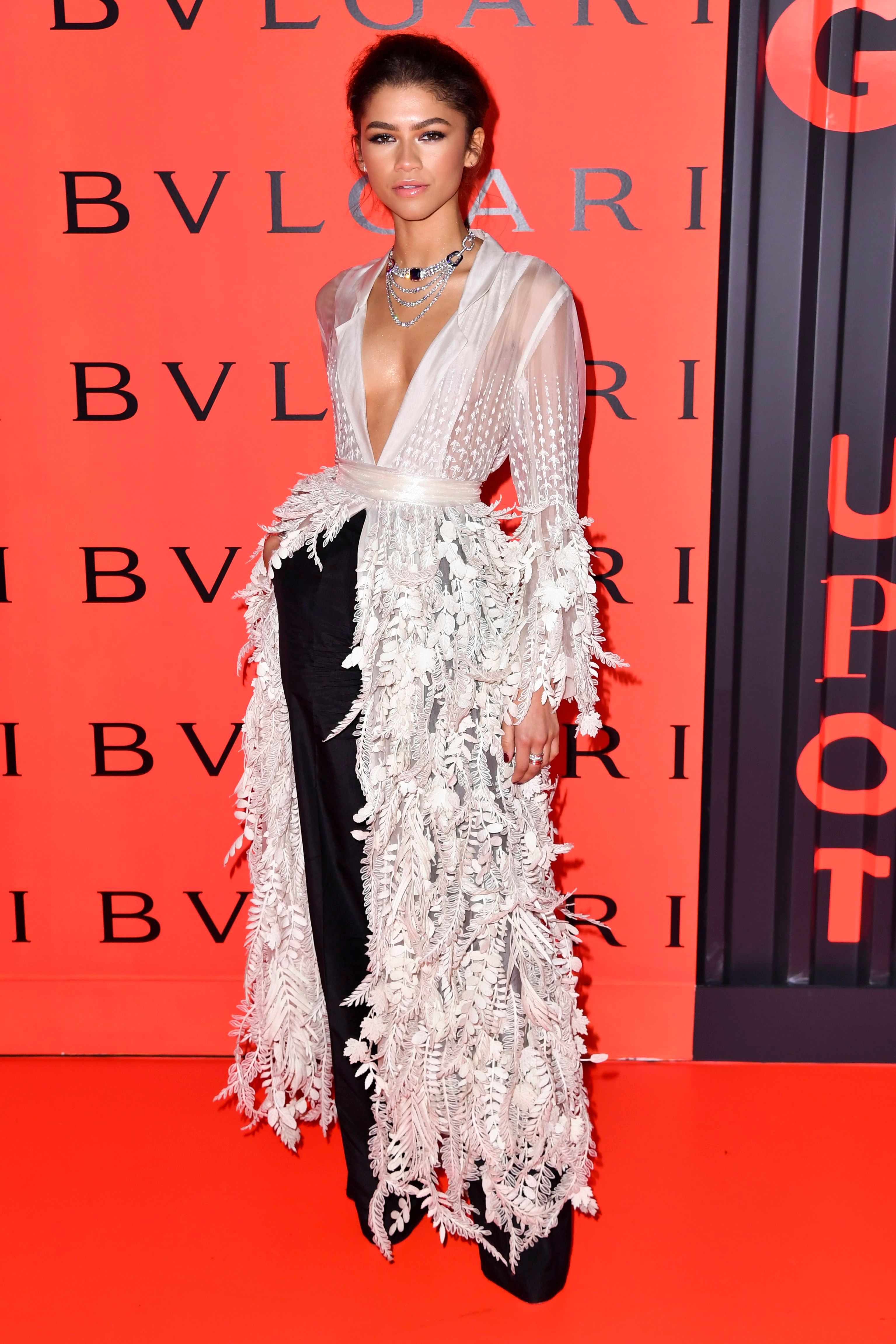 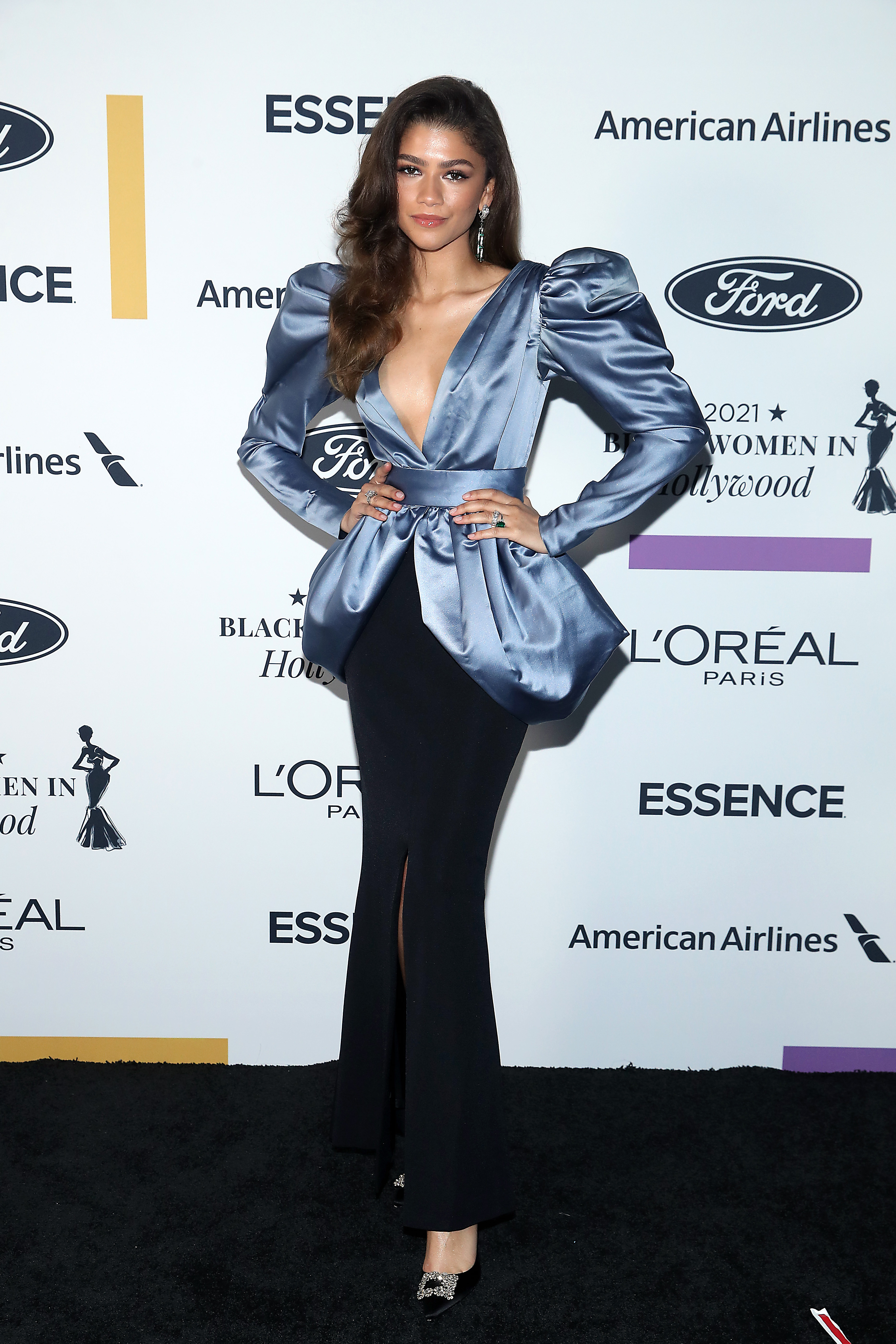 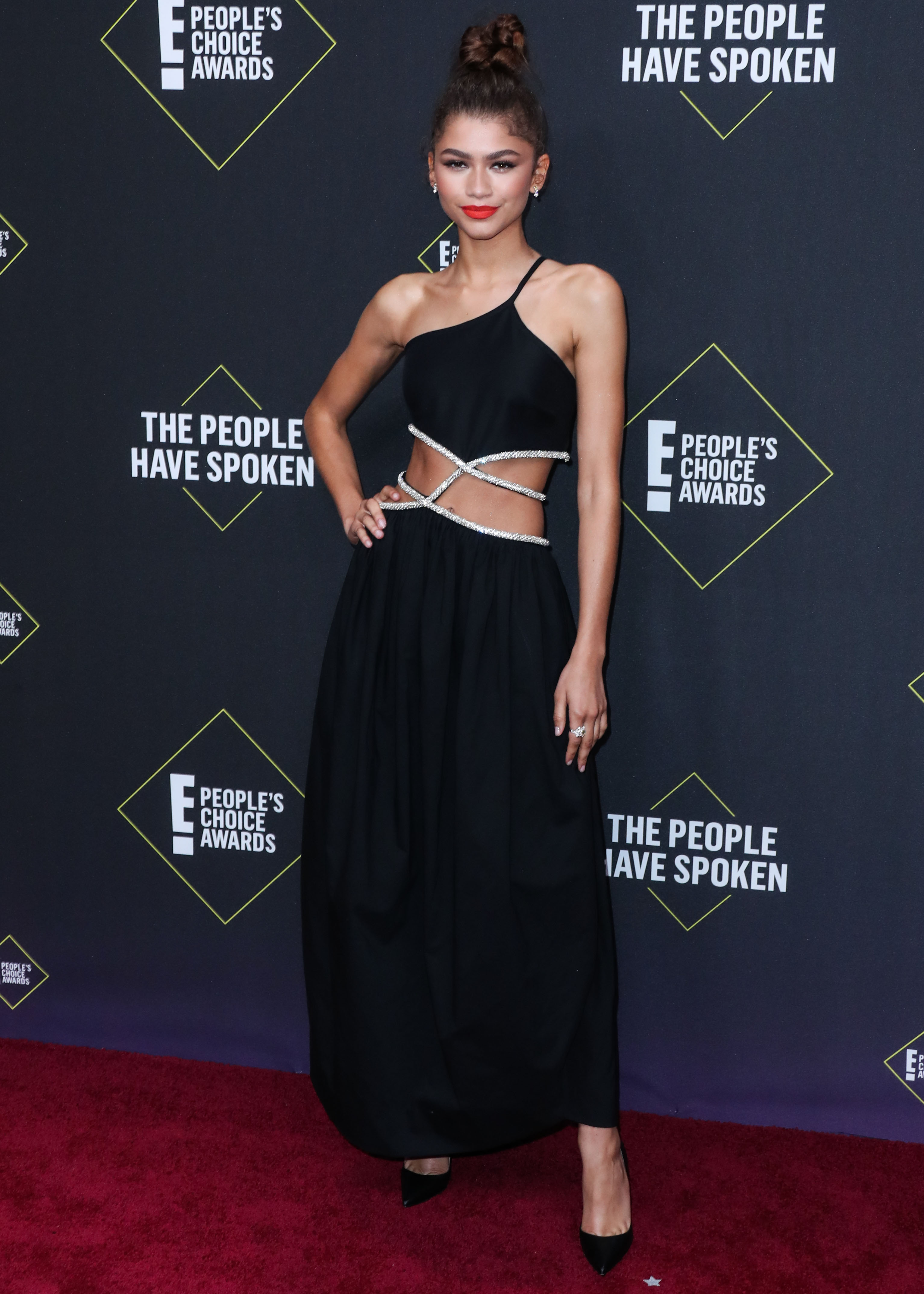 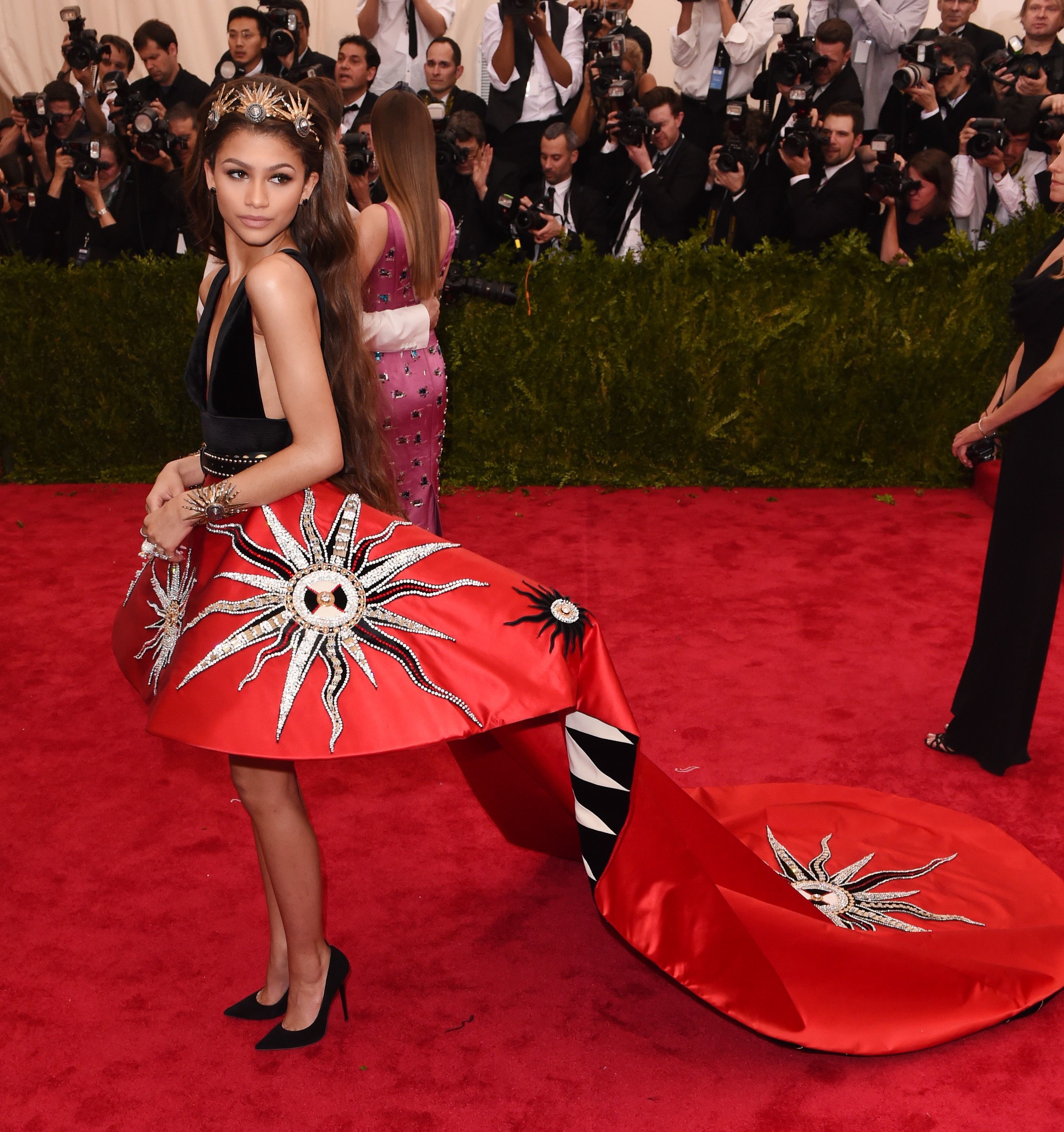 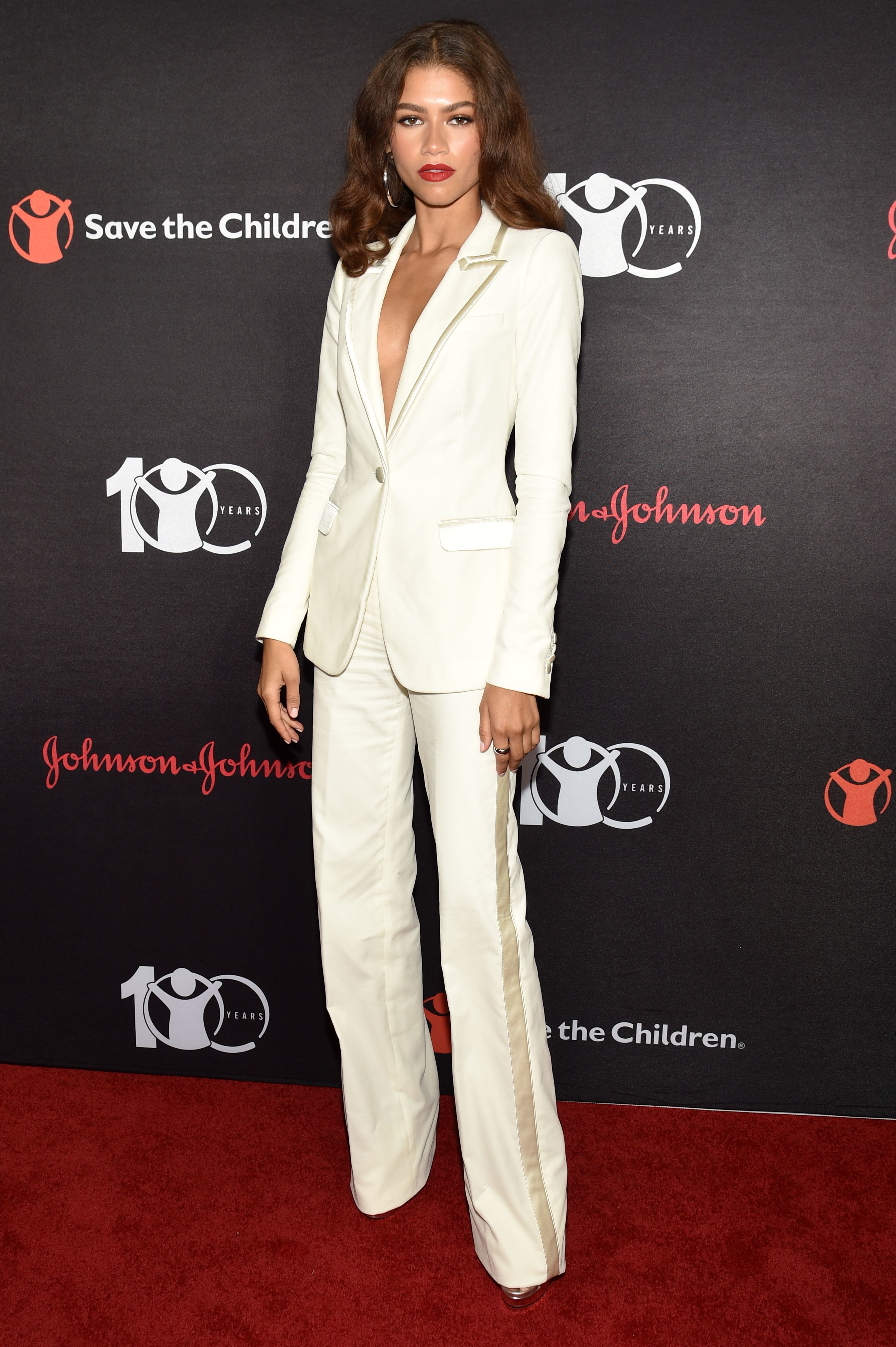 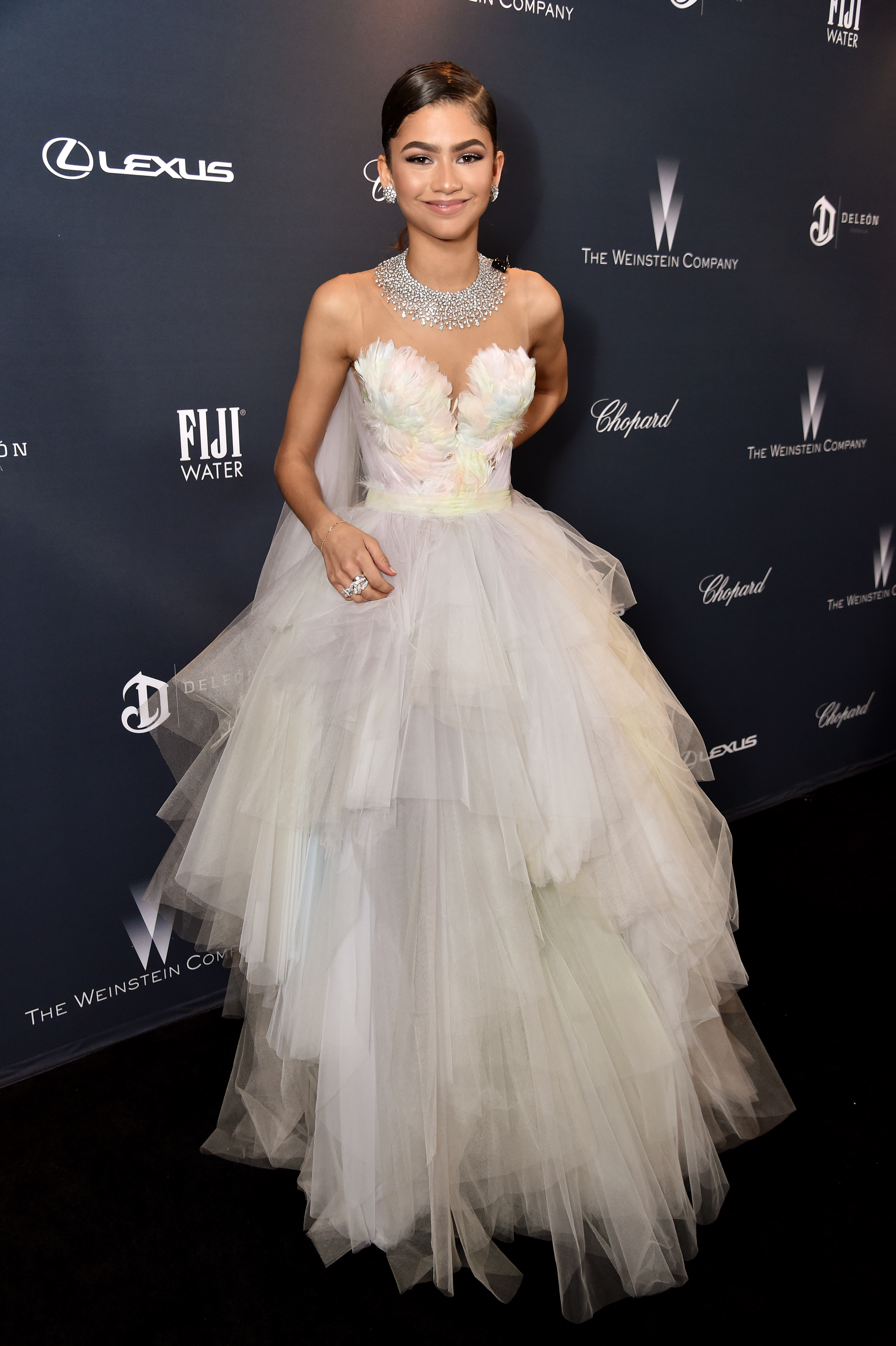 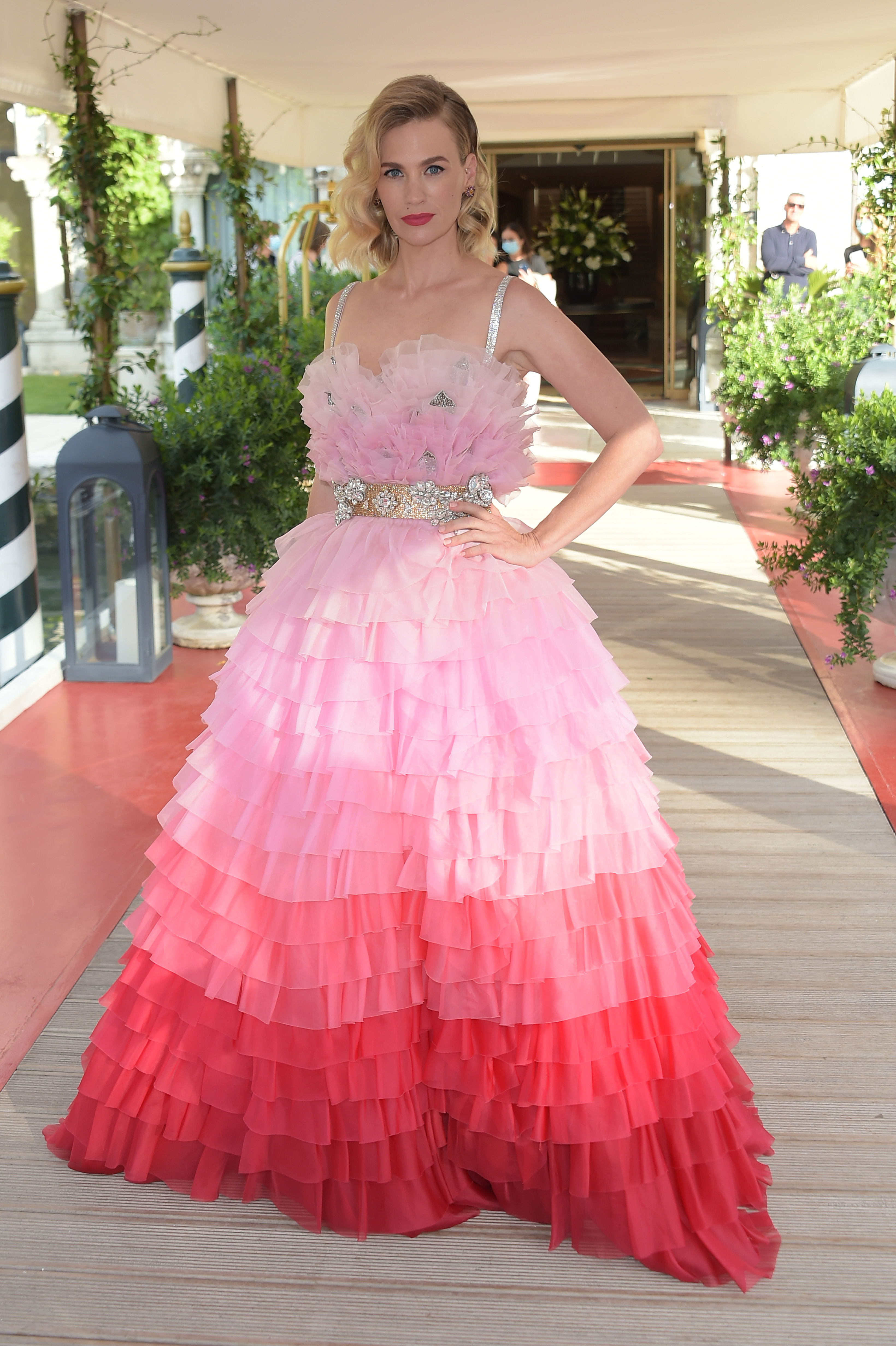