The second season of the Netflix series 13 Reasons Why is already marred by controversy over a disturbing rape scene, but the show’s creator is standing by his decision to feature graphic footage of a male character being sodomized with a broken mop.

After receiving backlash for the graphic depiction of Hannah Baker’s suicide in the first season of the series, the new season begins with a PSA of the show’s leading cast members warning that the series ‘tackles tough, real world issues’ — including sexual assault and school shooting storylines.

Despite the disclaimer, 13 Reasons Why is once again courting controversy over a scene that depicts school photographer Tyler Down (Devin Druid) being brutally beaten and raped by three student-athletes in the season finale. 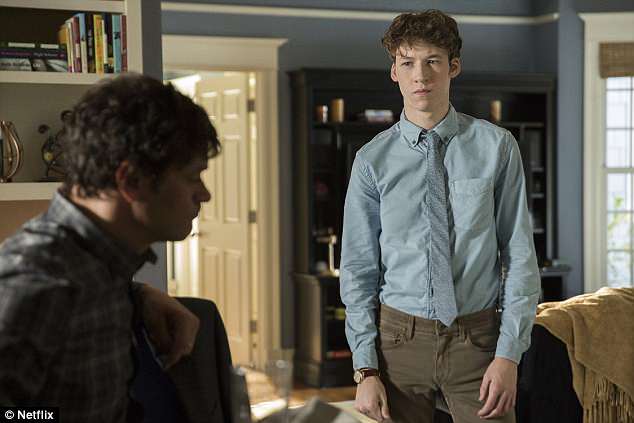 Backlash: The second season of 13 Reasons Why is being slammed over a graphic scene that depicts the character Tyler Down, played by Devin Druid (pictured), being raped

After being ostracized by his peers in the first season of the show, Tyler pulls off a series of blackmail and vandalism stunts while seeking approval from a group of punk kids.

The loner is shunned by his so-called friends and sent to a behavioral rehab program after he gets caught vandalizing the school baseball field, resulting in a canceled season. 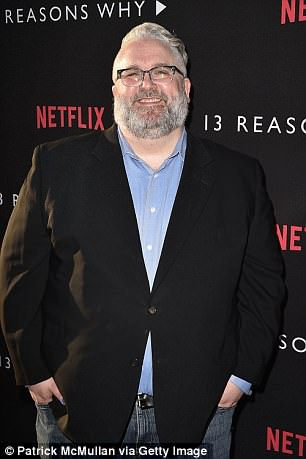 Defense: Creator Brian Yorkey defended the scene, explaining ‘it doesn’t even come close to the pain experienced by the people who actually go through these things’

When he returns to school, school-athlete Monty (Timony Granaderos) and two other jocks follow him into the bathroom to sexually assault him as revenge.

The disturbing scene begins with Monty bashing Tyler’s head against the sink before calling him a ‘f****t’ and dragging him to a stall to dunk his head in the toilet.

As Tyler pleads for mercy, the two other athletes hold him down while Monty takes a mop handle and forces it up his rectum. The excruciating pain is visible on Tyler’s face, and when Monty finally removes the mop handle, it is covered with blood.

The two minute scene was directed by Kyle Patrick Alvarez, the same director who filmed the controversial depiction of Hannah (Katherine Langford) slitting her wrists in the bathtub in season one.

Critics have called this season’s rape scene ‘disgusting’ and ‘unnecessary,’ while the Parents Television Council has issued an ‘urgent warning’ about the show. Referring to the new season as a ‘ticking time bomb to teens and children,’ the council has called for the cancellation of the series. 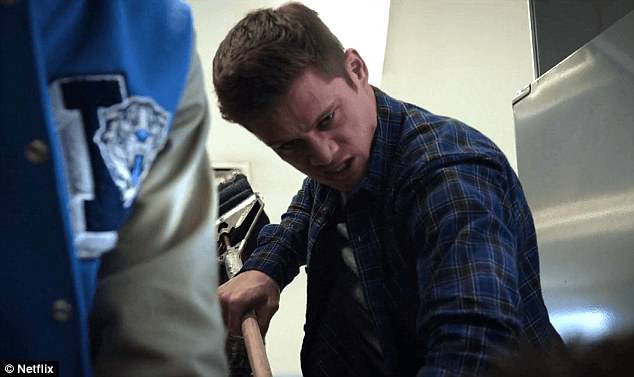 Too much? The excruciating scene depicts Monty, played by Timony Granaderos (pictured), sodomizing Tyler with a broken mop while two other male students hold him down 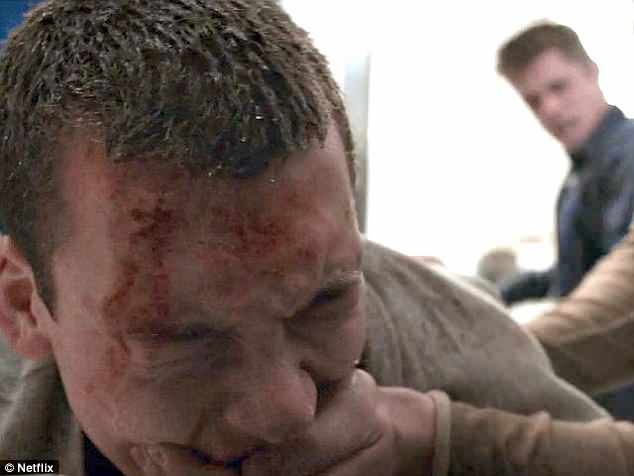 Hard to watch: The excruciating pain is visible on Tyler’s face, and when Monty finally removes the mop handle, it is covered with blood

For all the criticisms, there are also those who have supported the show’s exploration and graphic depiction of real issues plaguing teens across the country.

13 Reasons Why creator Brian Yorkey has defended the inclusion of the scene, telling New York magazine’s Vulture: ‘We are committed on this show to telling truthful stories about things that young people go through in as unflinching a way as we can.’

Last year, amid criticisms of the first season of the teen drama based on Jay Asher’s best-selling book of the same name, Netflix added an additional warning card at the start of the series.

Changes that were implemented for the new season include the custom introduction with the cast, an after show, and additional resources listed at 13ReasonsWhy.Info, including a viewing guide.

In his shared statement, Yorkey noted that Netflix has provided resources ‘for understanding that this may not be the show for everybody,’ as well as resources for those who are troubled by why they saw while watching it.

‘But the fact is that, as intense as that scene is, and as strong as are or reactions to it may be, it doesn’t even come close to the pain experienced by the people who actually go through these things,’ he said.

‘When we talk about something being “disgusting” or hard to watch, often that means we are attaching shame to the experience. We would rather not be confronted with it. We would rather it stay out of our consciousness,’ he added. ‘This is why these kinds of assaults are underreported. This is why victims have a hard time seeking help. We believe that talking about it is so much better than silence.’

Heartbreaking: Tyler is left crying in the bathroom stall after the brutal sexual assault 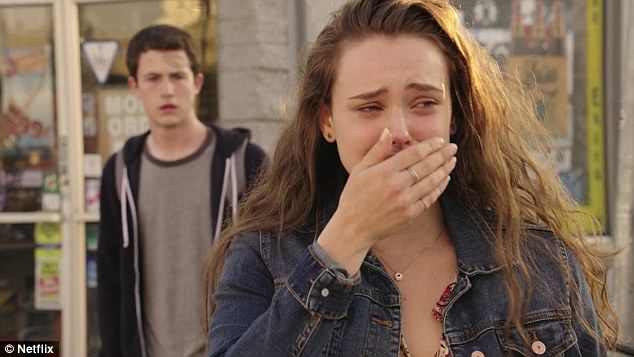 Similar issue: The show receiving backlash for the graphic depiction of Hannah Baker’s graphic suicide in the first season of the series (pictured)

Yorkey claimed the storyline came from research on real-life cases of male-on-male sexual violence in high school, and he said the decision to include the scene was supported by both Netflix and Paramount, which produces the show, following ‘extensive discussions.’

In the first season of the show, Hannah and Jessica Davis (Alisha Boe) are both raped by Bryce (Justin Prentice), and Yorkey pointed out that those scenes didn’t receive the same amount of backlash because the victims were women.

‘The very, very intense scene of Hannah’s suicide seemed to overshadow the fact that Hannah and one other girl were violently raped in season one,’ he said.

‘If there’s a greater sense of backlash about this scene, especially it being hard to watch, “disgusting,” or inappropriate, that goes to the point that we need to be talking about the fact that things like this happen.

‘The fact that this would be somehow more disgusting than what happened to Hannah and Jessica, I’m shocked but not surprised.’

The episode has also come under fire over a subsequent scene in which a traumatized Tyler takes an automatic rifle to the school dance with the intention of shooting his fellow students.

It is a continuation of the school shooting storyline that was introduced in the first season finale, and while he doesn’t end up going through with the massacre, critics have found the scene to be troubling considering the unyielding plague of gun violence going on in the country. 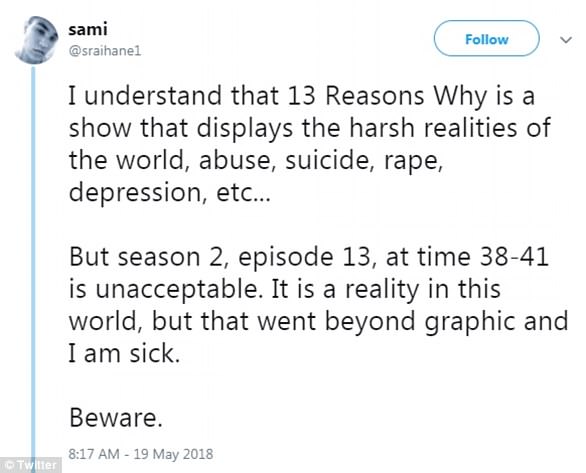 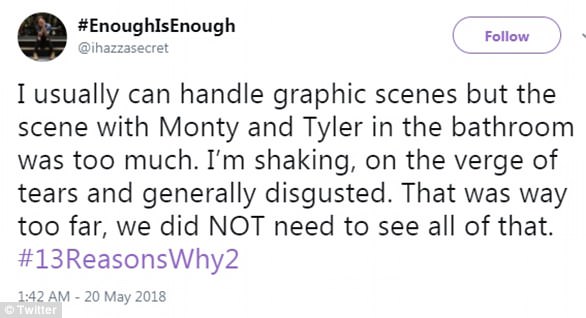 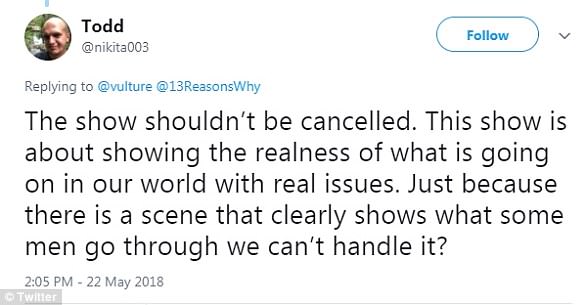 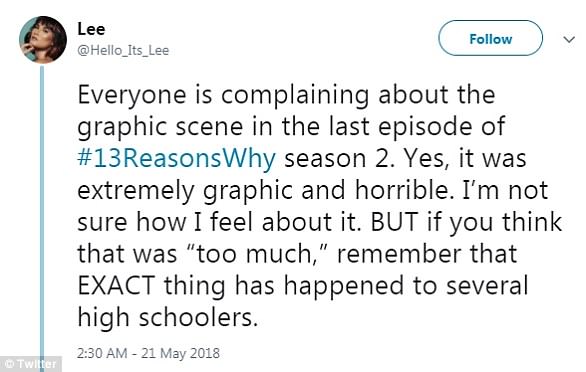 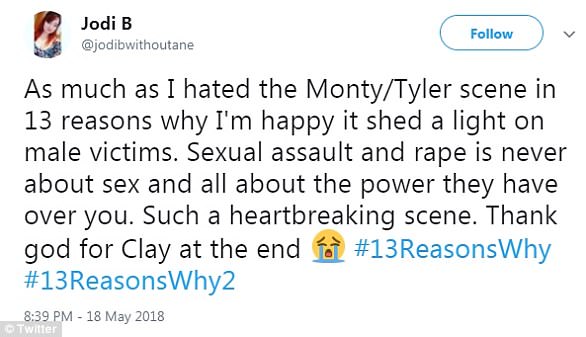 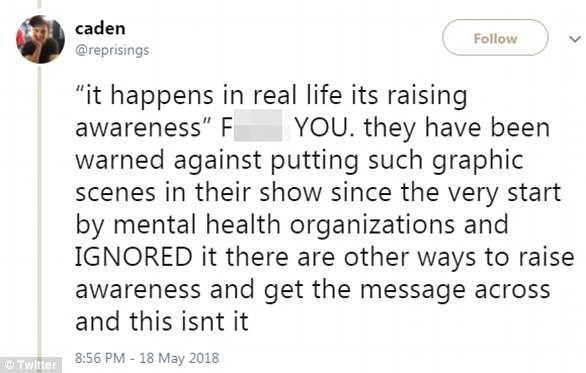 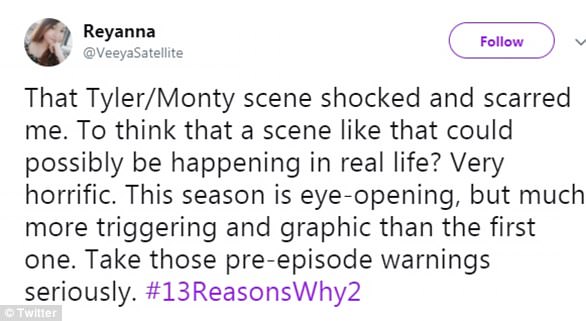 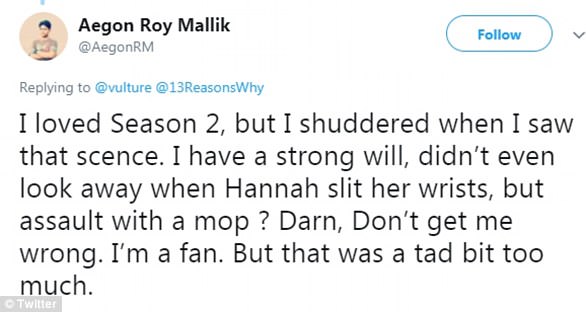 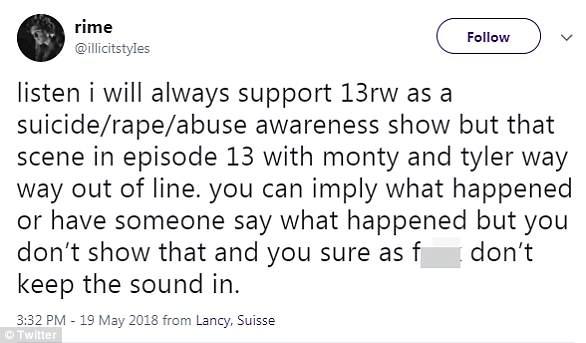 Netflix canceled the Los Angeles premiere party scheduled on Friday evening for its second season because of the school shooting.

The controversial release also follows the February shooting at Marjory Stoneman Douglas High School in Parkland, Florida, in which 17 people were killed.

Two weeks before the show’s season two premiere, Yorkey opened up about Tyler’s storyline, telling The Hollywood Reporter: ‘We had a character who was obviously severely bullied, suffering from social isolation and was thinking of making a very tragic choice in addressing those feelings for himself.

‘With season two … we’re very interested in continuing to follow his journey and to try to understand his state of mind and the state of his soul,’ he continued. ‘I think you’ll see in the balance of the episodes that it’s very much about trying to understand Tyler’s character and how a troubled young man might be driven to consider this very difficult choice.’

The showrunner said it is up to the audience to decide of the show has successfully addressed the issue in a way that sparks conversation about gun violence without glorifying it.

‘Unfortunately, there’s a great deal of literature about a great number of troubled young men who resorted to or almost resorted to violence to act through their feelings,’ he said. ‘So we were able to study a great deal of the history there, and we tried to be authentic and honest and also accurate in our portrayal of the character.

‘As with all things with the show, our hope was that we could honestly represent the experience; that our viewers might, through the experience, learn more and start more conversations about those issues in their own world.’

Season one of the series faced similar criticisms over Hannah’s graphic suicide scene, as well as the depiction of two female characters being raped.

People accused the show of glorifying suicide, and many mental health professionals agreed that such a realistic portrayal could lead to copycat suicides among teens.