Nissan has a funny reputation for building completely normal, totally down-to-earth automobiles. And then, seemingly out of nowhere, the Japanese automaker builds a car that absolutely blows the competition away.

From the world of exotics and sports cars, to everyday family sedans and economy cars, Nissan’s engineering team has an enviable track record when it comes to bringing high performance and driving fun to a vast spectrum of car buyers. Sure, you can spend upwards of $100,000 for a brand new GT-R, and spend your days harassing hapless Ferrari and Lamborghini owners. It’s fun, trust us!

But you can equally save a whole ton of cash and choose an understated classic, like the 1991-94 Sentra SE-R. Nimble and peppy, this little Nissan is also absolutely invisible to local authorities who’ll be more inclined to keep a watchful eye on the sports car crowd.

So, in no particular order, these are the fastest, most fun, and definitely some of the most influential Nissan performance cars of all time. 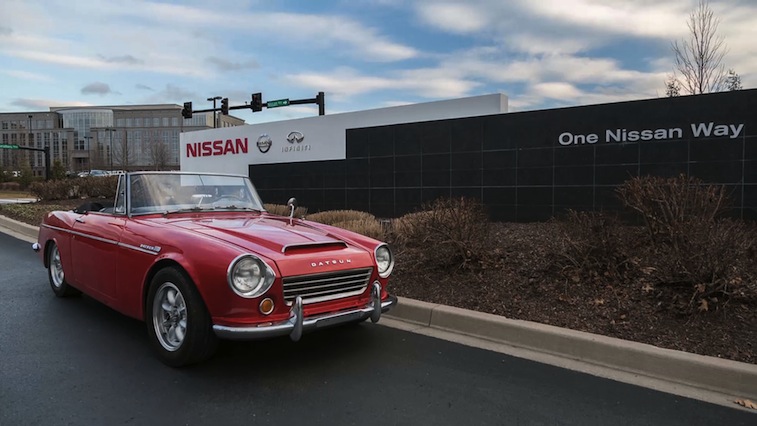 More cute and cuddly than fast and ferocious, the 1600 Sport Roadster is still one of those classic Nissans that created a performance foundation for the brand. When it hit its stride in the 1960s, the Datsun 1600 was pitted against small, chirpy, and primarily British roadsters from the likes of MG and Triumph. While it wasn’t quite as popular, the Datsun had the edge in agility and, most importantly, reliability. It’s not a fire-breather, but this rear-wheel-drive roadster remains and absolute delight to drive and own.

Next: This icon was referred to as “the poor man’s BMW.”

We know, the Datsun 510 kind of looks like a vintage Volvo that got left in the dryer for too long. Don’t let those square-edged lines fool you, however. This was Nissan’s answer to pocket-rocket sedans like the iconic BMW 2002 series. Okay, the SOHC 96-horsepower 1.6-liter 4-cylinder doesn’t sound terribly impressive on paper. But thanks to a curb-weight of only 2,000 pounds and fully independent suspension, this little Datsun was a giant-killer on roads and racetracks.

Next: One of the most underrated driver’s cars of the 1990s.

This is Nissan’s ultimate hidden weapon. Yes, it looks like completely basic transportation. That’s because it is, at heart, merely a Sentra economy car. However, those in the know will understand the SE-R, specifically the generation produced from 1991 to 1994, is the most fun you can have in a Nissan, all while looking like you’re driving the dullest car on the planet. The 4-cylinder under the hood delivers 140-horsepower to the front wheels. Big whoop, right? Wrong! A curb-weight of approximately 2,500 pounds and Nissan’s adeptness at putting fancy suspensions into hum-drum automobiles makes this car a blast to drive. This is the Sentra SE-R to own. The others that have come since are mere pretenders.

Next: The car that put Nissan on the map in the U.S.

The 1970 Datsun 240Z made Japanese sports cars available to the masses. | Nissan

The car that made Japanese sports cars affordable to the masses. There is no overestimating how important the original 1970 240Z coupe was to Nissan – then known as Datsun in the U.S. market – not to mention pretty much every Japanese automaker who sold cars stateside. Stylish and affordable, fast but also relatively frugal, the 240Z had a smooth 2.4-liter inline-6 with a stout rear-wheel-drive chassis, front disc brakes, and a fully-independent suspension, making it world-class sports car that was affordable for just about everyone. Tough and highly tunable, the 240Z became an instant classic. 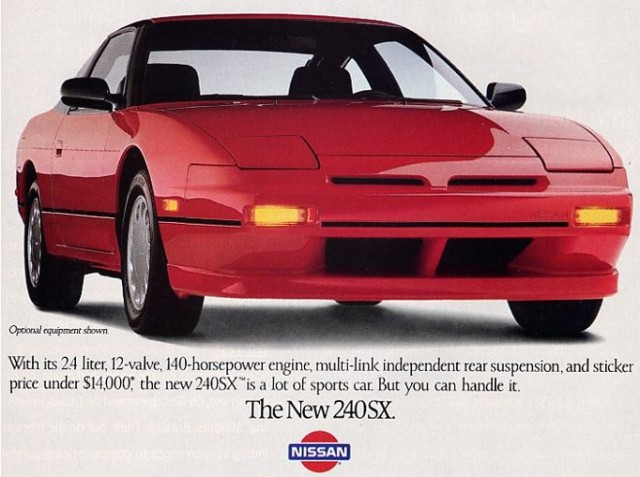 While it lives in the shadow of the mighty GT-R and punchy Z cars, the 240SX is a rear-wheel-drive joy machine that’s beloved by the tuning community. Want to go drifting in a Nissan? Buy a 240SX, right now – that is, if you can still find one in stock condition. The standard 2.4-liter 4-cylinder was fine for everyday driving. In fact, the 240SX was a wonderfully balanced sports coupe that owed its handling prowess to a sophisticated suspension system and, of course, it’s increasingly rare front-engine and rear-wheel-drive layout.

Next: For years, this truly was a four-door sports car. 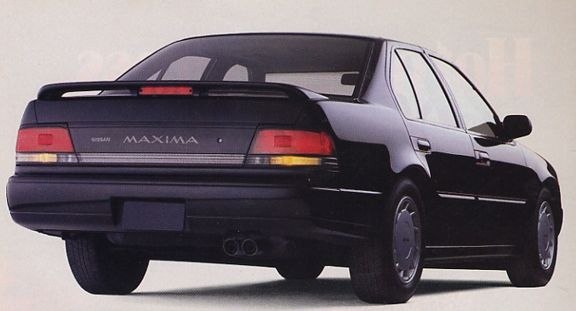 This sedan is still part of the current Nissan range. | Nissan

The curvaceous Maxima sedan is still part of the Nissan range, though today we’re going to look backwards towards the model originally called the “four door sports car.” The third-generation Maxima, produced from 1988 to 1994, actually had a tiny “4DSC” rear window decal fitted from the factory. Key to this Maxima’s fine manners was a sophisticated fully independent suspension. When fitted with the optional 190 horsepower 3.0-liter V-6, this Maxima had some serious moves. Later versions have tried to live up to this model’s performance rep but, for now, this is the purist’s choice when it comes to 4-door Nissan sports cars.

Next: This mythical sports car was never sold in the U.S.

The classic, boxy Nissan Skyline “Hakosuka” is as classy as it is coveted. | Micah Wright/Autos Cheat Sheet

The grandaddy of Nissan’s iconic Skyline and GT-R family tree cracks the top 10 on our list. If a vintage Mustang and 240Z could have an offspring, the result would look something like this big, bad Nissan muscle car. This two-door sedan came powered by a 160-horsepower inline-6, while a 5-speed manual was the only transmission on offer. Built from 1969 to 1971, this was the dawn of Nissan’s performance image, and the birth of the legendary GT-R name. Need we say more?

Next: This Corvette competitor was one of the coolest cars of the 1990s. 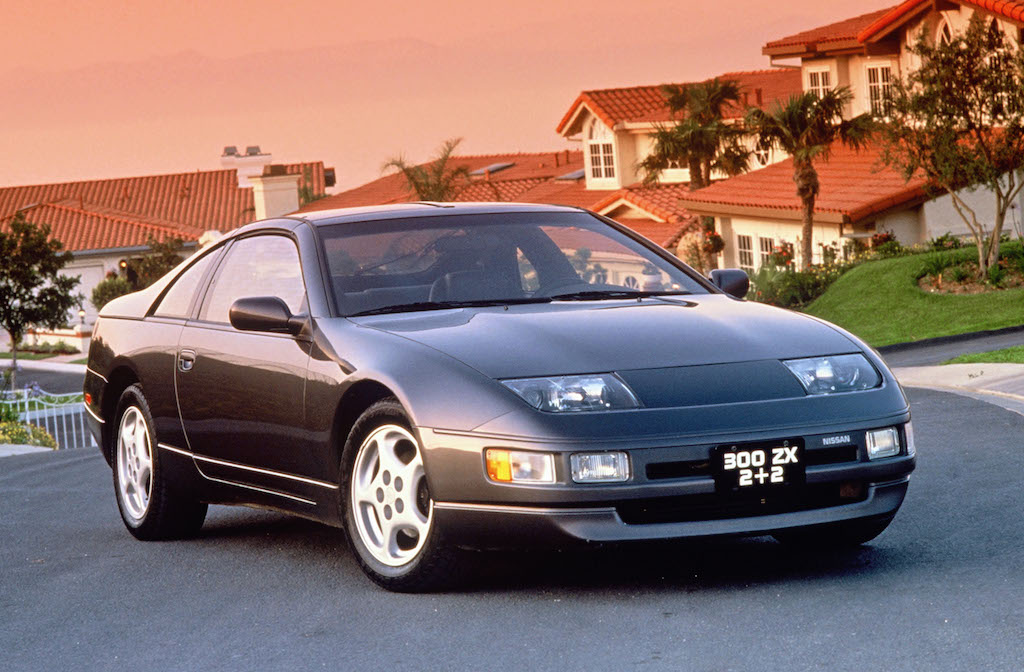 The 1990 300ZX brought Nissan’s Z car back into sports car territory, at a price. | Nissan

Over the years, Nissan’s Z car started to pack on the pounds and lose its earlier edge. By the mid-1980s, the 300ZX was more of a comfortable cruiser than all-out sports car. That changed once Nissan came out with a completely updated 300ZX in 1990. Sleek styling and an optional twin-turbo V6, not to mention Super-HICAS rear-wheel-steering, all made this Z car a force to reckoned with in the 1990s. The sprint from 0 to 60 miles per hour in the turbo models would take roughly 5.5 seconds or less. However, with a base price that kept creeping up into Corvette territory, the 300ZX faded from the U.S. market in 1996.

Next: Nissan’s way of keeping its most iconic nameplate alive.

Nissans Z cars remain on the market with the dynamic duo. | Nissan

Nissan’s pair of performance cars continues onward, and we’re happy for it. Despite fears that the end of the Z is coming – including one totally fabricated online rumor that the next Z would be an SUV – the 370Z Coupe and Roadster are still with us. With upwards of 350-horsepower and an exterior that looks like a taut bicep, the 370Z remains a bargain when it comes to pure bang for your buck. Sure, the cabin is cozy and the cargo area is cramped. But for a little more than $30,000, you get a 332-horsepower Nissan sports car that’s guaranteed to put a smile on your face.

Next: The fastest Z Car. 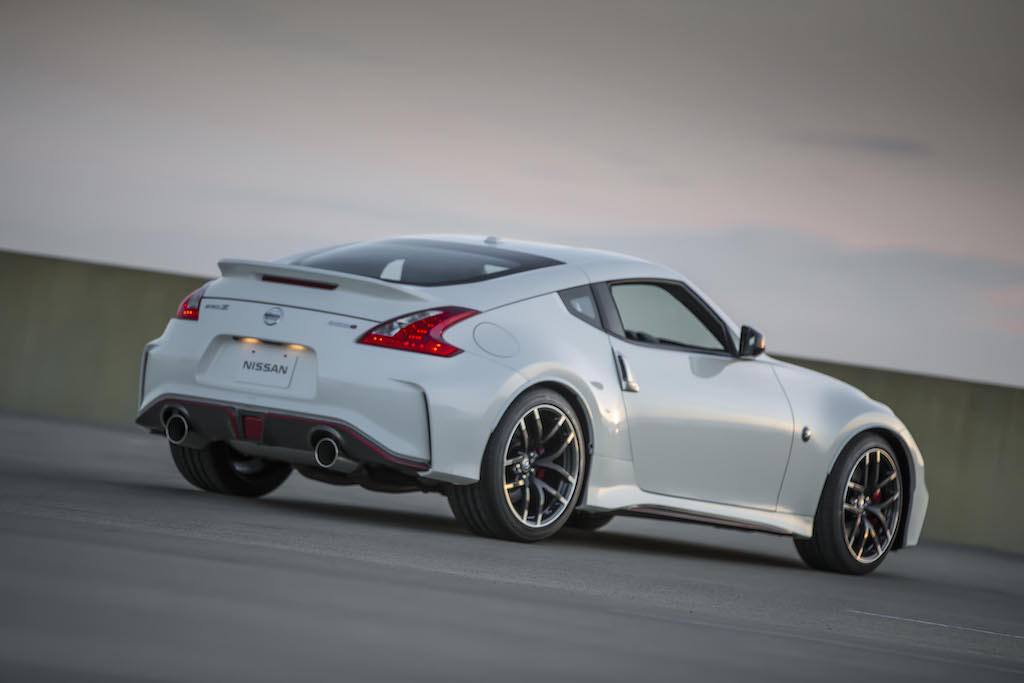 The Z is still going strong, with the 370Z Nismo as rolling proof that Nissan hasn’t forgotten its mighty, mini muscle car. With a firmer ride and tighter suspension, the Nismo version of the Z might be a little too intense for some people. The 350-horsepower V6 under the hood, along with a rev-matching 6-speed manual transmission and lightweight 19-inch wheels, are just part of a performance package that’s intoxicating for anyone brave enough to try it.

Next: This compact crossover has the heart of a supercar. 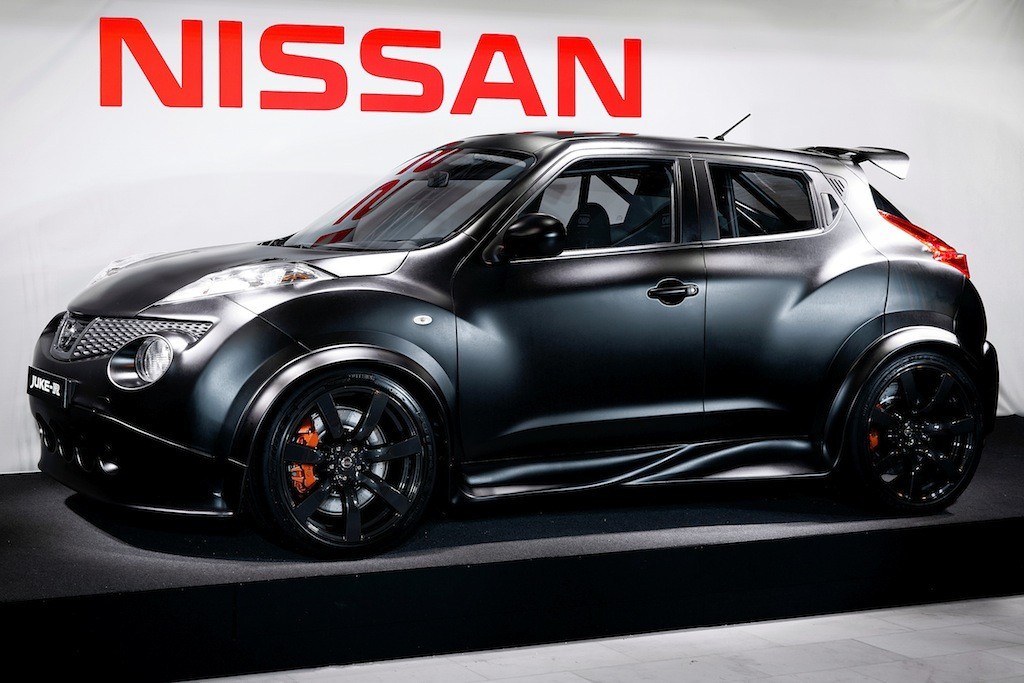 The Nissan Juke R might not be pretty, but it’s fast for a crossover. | Nissan

It sure isn’t pretty, but boy is it quick. Ranking as possibly the fastest ugly car on the planet, the Nissan Juke-R is a compact crossover with the heart of a GT-R supercar. And yes, it does happen to look like a seriously angry toad. For whatever reason, Nissan opted to shoehorn the twin-turbo V6 and all-wheel-drive hardware from the GT-R into the Juke. The result is a high-riding machine that loved to slip, slide, snort, and growl — a lot. Unbelievably, Nissan built some for public consumption; the price was more than $500,000 per copy. We might stick with the GT-R, thanks.

Next: This car’s racing prowess earned it the nickname “Godzilla.” 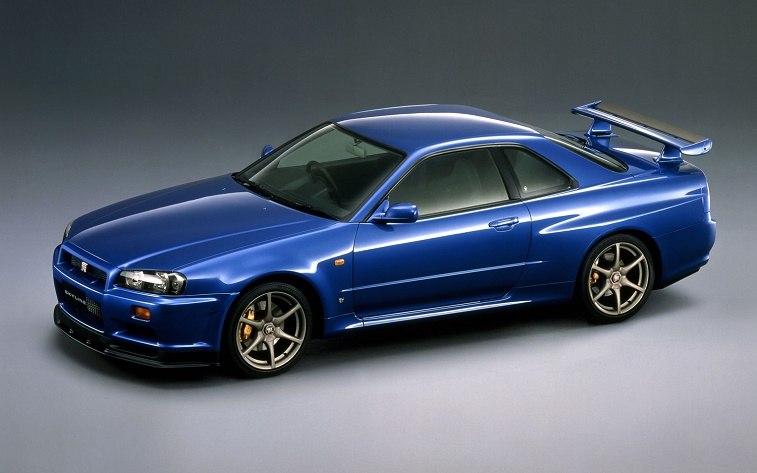 The 1999 Nissan Skyline R34 is also sometimes known for its appearance in Sony’s <em>Gran Turismo</em>. | Nissan

Before the latest GT-R arrived, this was the pinnacle of Nissan performance – well, excluding the wildly rare R390 GT1 (more on that in a bit). Broad-shouldered and brawny, a generation of gearhead gamers know this is the car to choose in Sony’s Gran Turismo PlayStation racing simulation. Fitted with Nissan’s legendary 2.6-liter inline-6 – entirely hand-built, like all GT-R engines – the R34 model also came with performance hardware like Nissan’s ATTESA-ETS all-wheel-drive system and a mechanical limited slip differential. Constantly tweaked and updated by Nissan, this generation could easily be the most collectible of all GT-R models.

Next: One of the best overall performance cars on the planet. 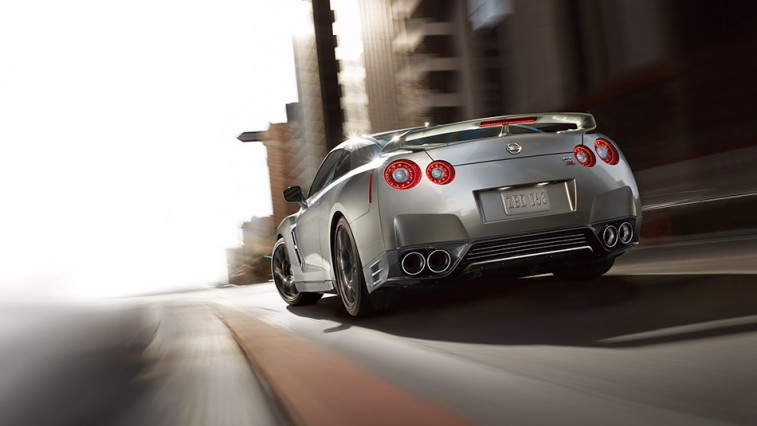 This list wouldn’t be complete without Nissan’s ultimate sports car superhero. Nicknamed “Godzilla,” the GT-R is a technical powerhouse that doesn’t hold anything back when it comes to finding more grip, more downforce, and more speed. A highly sophisticated all-wheel-drive system is coupled to the GT-R’s 565-horsepower, 3.8-liter twin-turbocharged V6. If you want some pared down, back-to-basics sports machine, then go buy a Miata. The GT-R uses every technical trick in the book and, because of this engineering approach, this Nissan is one of the quickest cars on the planet.

Next: Nissan finds a way to make a nearly-perfect car even better. 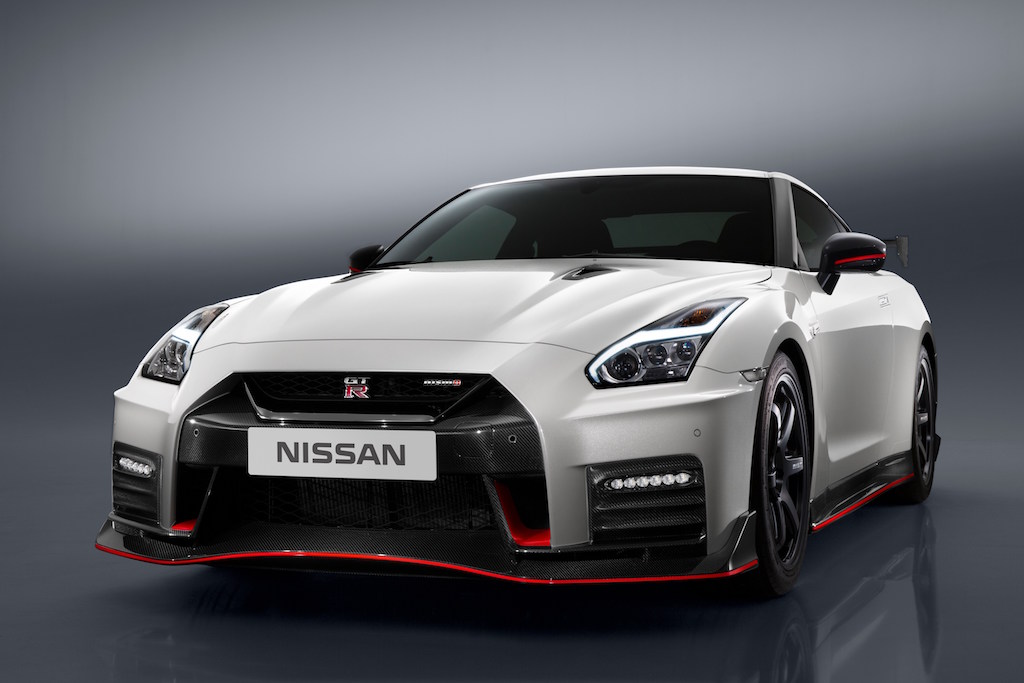 The Nissan GT-R Nismo needs less than 3 seconds to go from 0 to 60 miles per hour. | Nissan

If you thought the standard 2017 GT-R was a riot, then hold on tight, because the Nismo variant is a veritable rocket on wheels. Output from the twin-turbo V6 is cranked to 600-horsepower, while the same all-wheel-drive and torque vectoring mechanical wizardry in the GT-R is also found in the Nismo. Added to this, the Nismo model sports lightweight and aero-enhancing carbon-fiber body trim, including a tall rear spoiler. Hit the gas, and the GT-R Nismo requires less than 3.0 seconds to run from 0 to 60 miles per hour.

Next: A tantalizing look at what might have been. 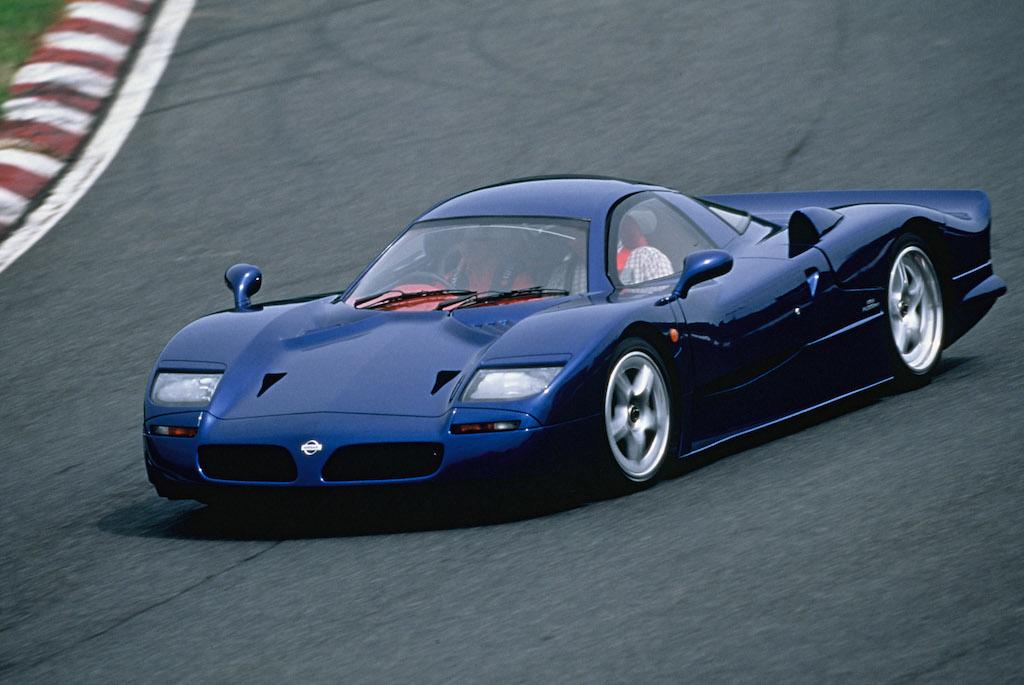 One of exactly one. That’s how many Nissan R390 GT1 road cars are out there. And the single example happens to be owned by none other than Nissan, of course. The R390 was created to take overall victory at the 24 Hours of Le Mans endurance race. It never quite pulled of the feat but, man oh man, it sure looked good trying. Behind the 2-passenger cockpit lurks a twin-turbocharged V8 engine, nestled deep in the carbon-fiber chassis. Top speed is well above 200 miles per hour – though we’re still waiting for Nissan to let us find out for certain.