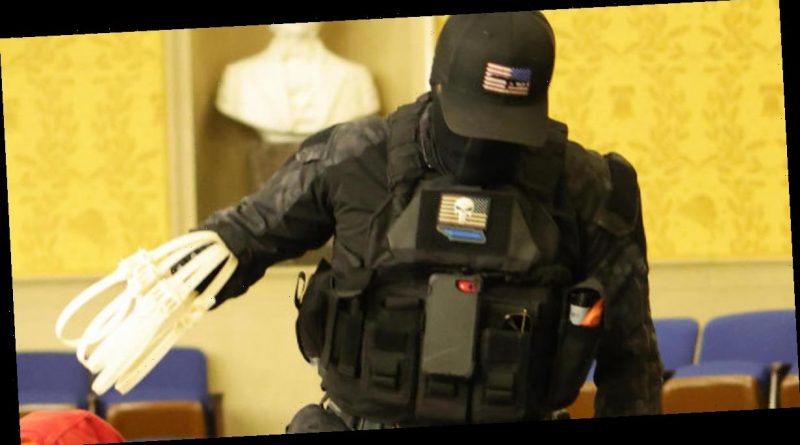 Two men allegedly seen in viral photographs of the deadly assault on the U.S. Capitol have been arrested, the Washington, D.C., attorney general announced Sunday. Larry Rendell Brock and Eric Gavelek Munchel were both allegedly seen in pictures of the riot occupying the chambers of Congress while wearing tactical gear and holding plastic zip ties.

Munchel was arrested in Tennessee on Sunday, the Justice Department said. He was charged with one count of knowingly entering or remaining in any restricted building or grounds without lawful authority and one count of violent entry and disorderly conduct on Capitol grounds. A law enforcement source told CBS News that “a load of weapons” was found at Munchel’s residence and they are assessing whether they were legally owned. 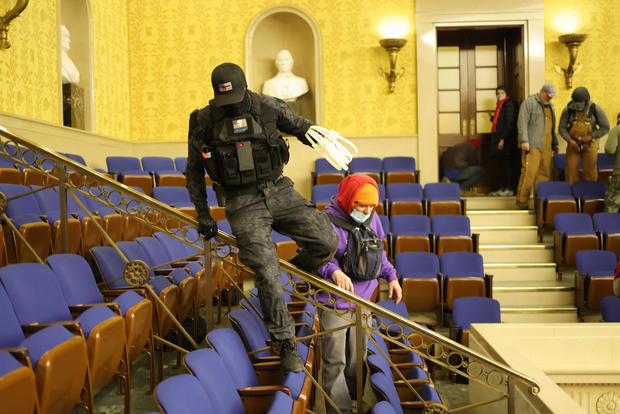 The Justice Department claims that Munchel is the man seen “carrying plastic restraints, an item in a holster on his right hip, and a cellphone mounted on his chest with the camera facing outward, ostensibly to record events that day.”

Brock was arrested Sunday in Texas and charged with the same crimes as Munchel, the Justice Department said. The department alleged that Brock is the man seen in multiple photographs from the riots wearing a green helmet, tactical vest and black and camo jacket while also carrying plastic zip ties. 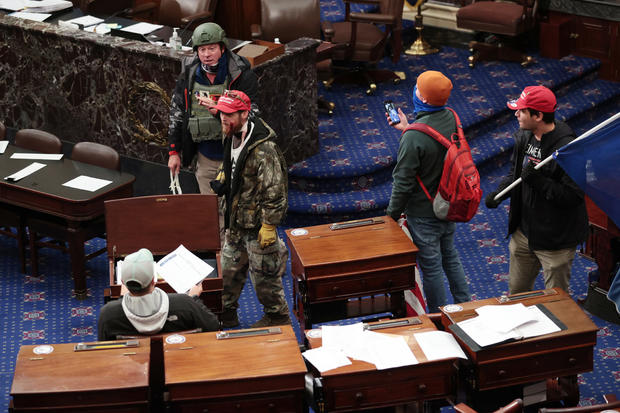 Brock was identified as a retired Air Force lieutenant colonel by John Scott-Railton, a senior researcher at Citizen Lab at the University of Toronto’s Munk School. Scott-Railton told CBS News that he used a combination of facial recognition software and a group of experts to help identify the patches on his clothing. Brock’s identity was first reported in The New Yorker.

After feeling confident in his identification, Scott-Railton told CBS News, “I decided it was time to contact the FBI and refer the info to them.”

“I didn’t immediately go public, but worked with [journalist] Ronan Farrow and his team of fact checkers at the New Yorker,” he said. “I believe American public needed to know but wanted to be certain.”

Brock is the second member of the Air Force to be implicated in the Capitol Hill riot. Ashli Babitt, the woman shot and killed by Capitol Police during Wednesday’s siege, was a U.S. Air Force veteran.

The arrests come one day after two other men allegedly seen in viral photos from the riots were taken into custody and charged. On Saturday, Jake Angeli, also known as the “QAnon Shaman,” was allegedly seen in multiple photos and videos from the riot shirtless and wearing horns and a fur hat on his head. Angeli was arrested in Arizona and faces the same charges as Brock and Munchel.

Adam Johnson, a 36-year-old Florida resident, was also arrested Saturday after he was identified as the man pictured carrying House Speaker Nancy Pelosi’s lectern and waving to the camera.

At least 19 people have been charged with federal crimes relating to the Capitol assault. Authorities continue to search for others who were involved.