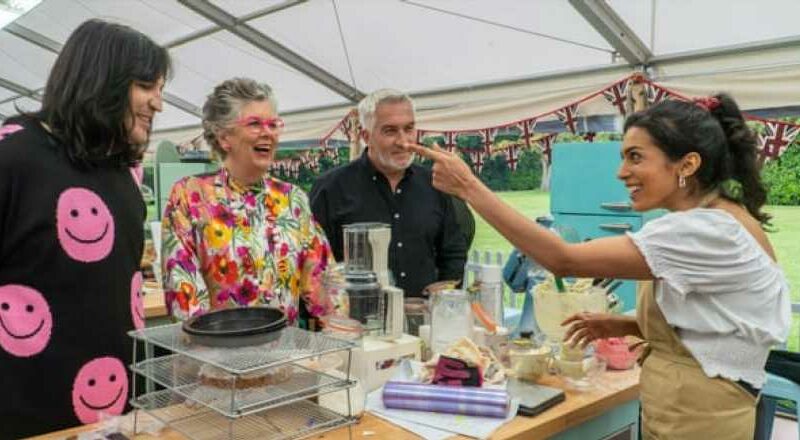 Bake Off is back – and it’s brought all the relatable content we could ever need with it. Here are the highlights you may have missed from episode 1 of The Great British Bake Off.

For one glorious hour on a slightly chilly Tuesday evening in September, all that is wrong with the world faded away. We’re of course talking about the return of The Great British Bake Off, which was back with a bang on Channel 4 last night.

Paul, Prue, Noel and Matt were once again in the tent to kick things off for the show’s 12th series, with a class of new bakers ready to take on challenges that included mini rolls, malt loaf and daring anti-gravity cakes as the showstopper creation.

But let’s be real, while we love Bake Off for the cake-based joy it brings us, we’re also absolutely here for the oh-so relatable memes it provides us with, from James Acaster’s iconic “Started making it. Had a breakdown. Bon appetit” celebrity Bake Off quip to series 9 winner Rahul’s wholesome reactions to absolutely everything.

Here are some of the best internet reactions to episode 1 of The Great British Bake Off 2021.

George summed up how we’re all feeling right now

After being asked by host Noel Fielding how he was getting on, new contestant George spoke to the mood of the entire country when he replied “all over the place at the moment.”

It started looking like yet another win for Italy

After Giuseppe, king of eyebrows wowed the judges with his hovering cloud anti-gravity cake, the internet was quick to point out that it might end up 3/3 for Italy after winning the Euros and Eurovision.

Jürgen captured the hearts of many with his tales of his rabbit, Humphrey and a baking prowess that earned him star baker.

Others hadn’t yet made up their minds

Too many great bakers to choose from.

Lockdown was a time for loungewear and lie-ins, thank you very much.

The show took some strange turns…

The Paul Hollywood/Billy Ray Cyrus we didn’t know we wanted?

But ultimately made us feel very seen

George really did speak for the people in episode 1.

More than anything, everyone was pleased to see the show back

Tuesday nights have never been better.