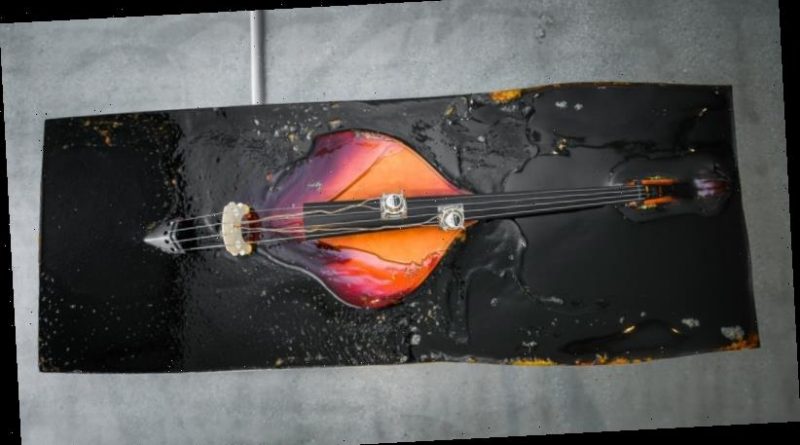 A double bass, the biggest, deepest beast of the orchestral strings, is embalmed in toffee in a Yarra Valley gallery.

Over the next couple of months, with agonising slowness, that toffee will slump to the plinth below. The exposed strings, meanwhile, will vibrate to the subtle thump of “slow earthquakes” recorded on the sea floor off the coast of Japan just before the 2011 Tohoku earthquake and tsunami. 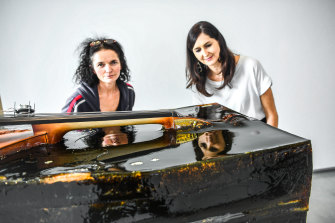 What, you may be entitled to ask, is this all about?

Well, you’ve heard of slow food, and slow TV. You may have encountered Cittaslow, the Italian organisation that wants to improve quality of life in towns and cities by forcing cars and people to slow down. Perhaps you’ve even come across the slightly scandalous slow sex movement.

This is slow art.

And it’s a key conceptual theme in a bold new exhibition of Australian contemporary art, the TarraWarra Biennial.

“I’ve been reflecting on how we live in this age of acceleration and I developed a show in response to that,” says curator Nina Miall. “These slow practices and ideas are not especially new but they’ve certainly developed momentum and gained currency in recent years.

“There can actually be a lot of dynamism and energy in slowness. The experience of the exhibition is that it unfolds, materially and spatially and conceptually.” 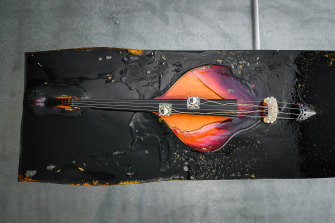 Slowness is almost a radical idea, she says. It’s an act of resistance against the insistent modern, capitalistic, global world. Against relentless, 24/7 productivity. An artistic vaccine for our besieged attention span and informational overload.

Lucy Bleach is the artist behind the double bass, more formally known as Attenuated Ground (the Slow Seismogenic Zone).

She has been working with toffee for a while in her Hobart studio – a 2017 work saw a cello rendered mute inside a toffee slab, glowing like a wildfire.

“I’m interested in different temporal registers, and certainly a slowing down of things,” Bleach says. Before the pandemic she had been about to go to Kyoto to speak to experts in “slow earthquakes”, which release energy over hours or months, at a frequency far lower than humans can hear. One professor provided data from the slow earthquakes that built up the day before Tohoku hit, which Bleach transformed into a “vibrational signal” plucked on the strings of the bass.

That signal will, at first, be muffled by the toffee. Over weeks and months it will emerge sonically as the instrument emerges physically.

Toffee, Bleach says, is a “mesmerising material” because of its slow transition from solid to liquid: depending on how it’s cooked it can take months to “slump”.

“It’s beautiful, but it can also be very repulsive, visceral. It’s like lava…. it’s infinitely interesting and affecting.”

There is beauty in instability, in something falling apart, Bleach says. But there is also a tragedy in our species’ inability to save the planet by not thinking in geological time. 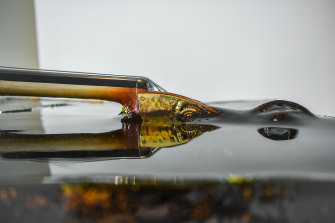 A closeup of Attenuated Ground.Credit:Justin McManus

While planning the show, by pure coincidence, curator Miall discovered the meaning of TarraWarra. It’s a Woirurrung word most commonly translated as “slow moving waters”, a reference to the meandering, patient arcs of the Birrarung (Yarra river) as it passes by the Yarra Valley estate.

And this helped Miall to ground the exhibition strongly in country. With local artists, including Aunty Joy Murphy Wandin, she worked to created a space of “deep listening” with art that reflects the alternative conceptions of time and space in First Nations cultures.

Another highlight of the exhibition will be a co-production with the upcoming RISING festival: The Rivers Sing. Composed by Deborah Cheetham, it is a monumental sonic artwork designed to reverberate around the Birrarung and for kilometres beyond, which will travel down the river to Melbourne as the festival approaches.