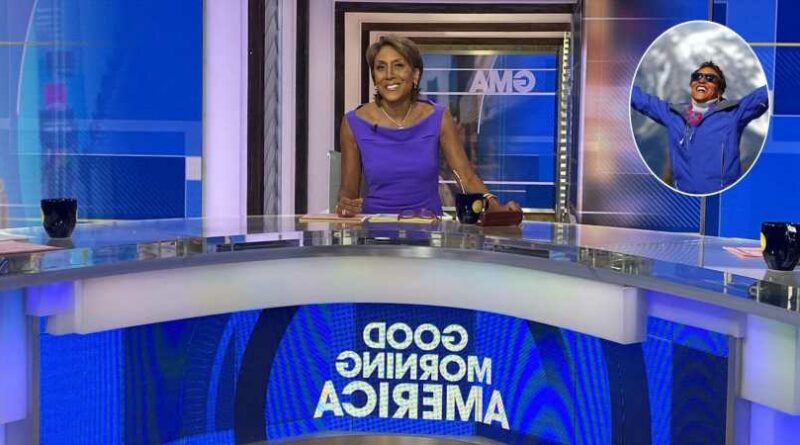 She made a name for herself as Southern Louisiana University’s third all-time leading basketball star in scoring and rebounds and then went on to become one of the best-known “Good Morning America” anchors of all time.

Her love for sports and willingness to share the not-so-pleasant things in life, has made her, what fans believe to be one of the most relatable public figures in recent history. The open and understanding way she shares and addresses others, has led to success, friendships and a view at the top of an award-winning career.

Robin Roberts has a net worth of $45 million, earning approximately $18 million each year and while she spends her days telling others’ stories, she has a story to tell of her own.

Rising to the Top

She comes from a successful, passionate and career-driven family. Her father, Colonel Lawrence E. Roberts was a pilot with the Tuskegee Airmen and Roberts was raised in a home full of discipline and strong faith.

Roberts spent her college years as an athlete and graduated with a communications degree in 1983, landing her first job as a sports anchor for Hattiesburg, MS WDAM-TV. Moving from station to station across Mississippi, Roberts continued to rise in her journalism career by taking a position in Atlanta in 1986 and by 1990, became a sportscaster for ESPN.

According to MSN, she was the first black anchorwoman for the network and five years later, landed a feature reporter gig with “Good Morning America”. In 1996, she became the first black female host of “ABC’s Wide World of Sports”. By 2005, Roberts became co-anchor of “Good Morning America” and has been the welcome face in morning news television ever since, earning three Primetime Emmy Awards for her work.

In 2007, Roberts was diagnosed with breast cancer and the world watched and she received surgery, radiation and chemotherapy. Her open and honest sharing of the illness and the process she went through toward healing, led many fans to get their mammograms and learn more about women’s health.

Following several years in remission, Roberts shared she had been diagnosed with myelodysplastic syndrome (MDS), requiring a bone marrow transplant (from sister Sally-Ann) in 2012, according to Daily Mail and again, shared each step with a global audience.

However, even the health scares and setbacks never slowed Roberts down. She hosted a series of reports through ABC, “Robin’s Journey”, winning a Peabody Award for the coverage and upon her return to “Good Morning America” she announced her memoir would be hitting shelves in 2014.

Though close friends and family knew of several relationships in the past, Roberts shared her sexual orientation with the public in 2013 and announced she and Amber Laign, a licensed massage therapist and co-founder of CBD and essential oils brand Plant Juice Oils, had been together since 2005.

The couple spends time in their New York City apartment, purchased in 2005 for $2.5 million and then retreats to their home in Connecticut for weekends and vacation.

Purchased in 1994 for $410,000, the two spent their time in quarantine at their Connecticut home, which Bugle24 describes an open-plan, vaulted ceiling living room, leading to a wood-paneled kitchen and a gorgeous outdoor space, including pool, gardens, white picket fence and relaxing space.

The home includes four bedrooms, three and a half bathrooms and a full basement.

Roberts and Laign have no children but frequently post photos and fun videos with their dog, Lukas and make a point to celebrate their July 26 anniversary each year with gifts and social media posts, professing their appreciation and love for each other.

Though her life has been full of ups and downs, Roberts has received numerous awards and accolades for all she’s accomplished in her 60 years and she doesn’t plan on stopping anytime soon.

Roberts is executive producer of Rock’n Robin Production company and has produced several films in the past couple years; “Stolen By My Mother: The Kamiyah Mobley Story” was then accompanied by a documentary, “Beyond the Headlines: The Kamiyah Mobley Story”, hosted by Roberts. In 2020, her production company also released, “Shark Attack: The Paige Winter Story” through ABC.