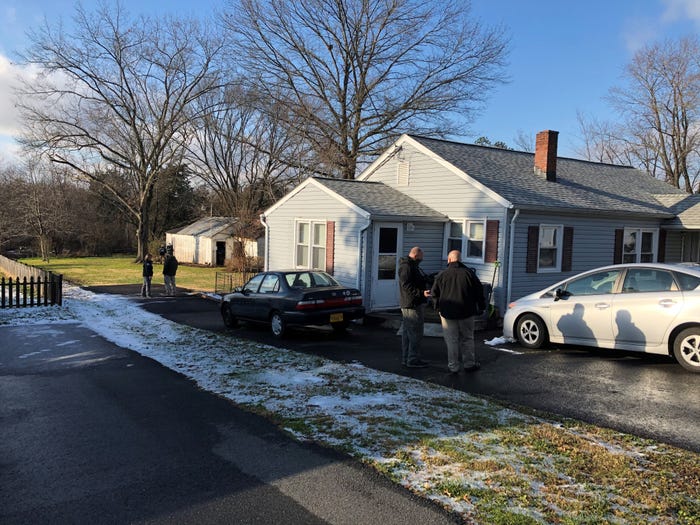 Authorities said Nathan Larson abducted the girl after meeting her on social media in the fall, according to a Saturday press release from the Fresno County Sheriff's Office. Fresno police said Larson was arrested at the Denver International Airport during a layover with the girl, who was reported missing on December 14 and has since been reunited with her family. Larson, who is 40, was flying with the girl from Fresno to his home in Virginia, according to police.

Larson faces a misdemeanor charge of harboring a minor as well as federal charges of kidnapping, child abduction, soliciting child pornography from a minor, and meeting a child for the intention of sex.

Larson met the 12-year-old girl online in October. Police said he "was able to convince the Fresno girl, through manipulation and grooming, to send him pornographic images of herself" over the last two months. Tony Botti, the public information officer at the Fresno County Sheriff's Office, declined to share which social-media platform Larson had used to meet the victim. In an email to Insider, Botti said, "All social media can be used for malicious purposes."

Larson was previously arrested in 2008 for sending a letter to the Secret Service threatening to kill the president of the United States. He pleaded guilty and spent 14 months in prison, authorities said.

The 40-year-old is a known figure in the world of fringe online message boards, having previously created two websites for pedophiles and incels, or involuntary celibates. When he ran for Congress as an independent in Virginia in 2018, the IP address for his campaign website matched those of the message boards, HuffPost found.

In an interview with HuffPost in 2018, Larson admitted to being a pedophile. He also told the outlet that there was a "grain of truth" to an essay he wrote about father-daughter incest and another story in which he claimed to have raped his ex-wife. His ex-wife was granted a restraining order against him in 2015, the Washington Post reported, before she died by suicide.

Larson, who called Adolf Hitler a "white supremacist hero" in a 2018 campaign manifesto, has written extensively about his chauvinistic, patriarchal views, and engaged in discussions about violence, pedophilia, and rape on the message boards he previously ran. In one post published under a pseudonym in 2018, Larson wrote, "feminism is the problem, and rape is the solution," according to HuffPost.

"We need to switch to a system that classifies women as property, initially of their fathers and later of their husbands," Larson wrote in a 2018 campaign manifesto for his failed congressional run. "The purpose of women, in a patriarchal society, is to be reliable conformists to what is expected of them, and to be judged primarily based on their beauty and cooperativeness, i.e., their averageness; and only secondarily on the basis of intelligence."

In that manifesto, which was taken down but remains available through webpage captures, Larson said he supported "legalization of child pornography possession and distribution." He also said he was running on a platform that included restoring "benevolent white supremacy."

The Fresno County Sheriff's Office said in its press release that "detectives believe he has victimized other children in the past, but those cases have never been reported to law enforcement," because of the "sophisticated nature" with which Larson groomed the girl from Fresno. Botti, the public information officer, told Insider on Monday afternoon that the sheriff's office had already received a "tremendous" amount of tips from people across the US and Canada who communicated with Larson.

Fresno police said Larson is currently incarcerated in the Denver County Jail and is expected in court on December 24. He hasn't entered a plea yet.