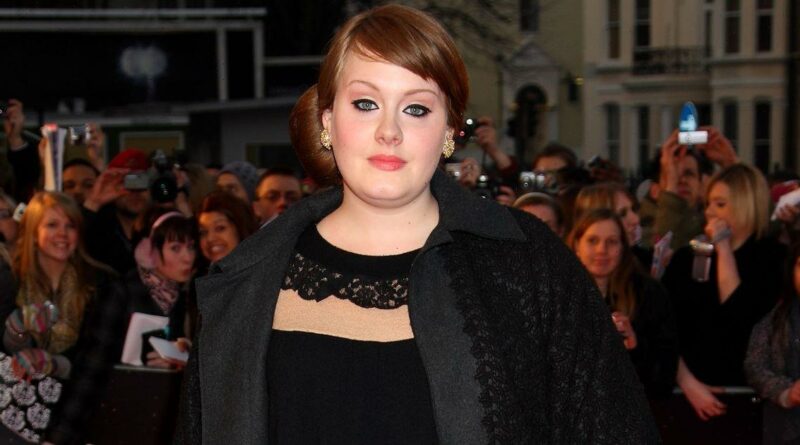 Adele looked every inch the superstar as the 33-year-old pop sensation graced the red carpet at the 2022 Brit Awards in full glamour, looking totally at ease as she posed for paparazzi in her custom made Giorgio Armani Prive gown.

The singing sensation first rose to fame 14 years ago with her debut album 19, and attended her first ever Brit Awards just weeks later where she picked up the first ever Critics Choice Award.

Adele, who is now an icon for us Brits, looked unrecognisable as she graced the red carpet back in 2008 at just 19-years-old, opting for jeans and a tunic – the teen star was a long way away from a bespoke designer.

Adele's first ever Brit Award's was one of her first ever major public appearances, and she soon became our nation's sweetheart as she beat off Duffy and Foals to scoop up the Critic's Choice Award.

The star's choice of an oversized tunic and dress coat, paired over black skinny jeans is a world away from the Adele we know now.

Still a world away from present day, Adele looked super sophisticated as she took to the 2011 Brit Awards red carpet in a black knee length dress, with embellished sleeves and a scoop neck.

Pairing her black frock with sensible nude tights, it's a huge jump from 2008 – but Adele still has a long way to go in terms of her glamour evolution.

Taking to the stage to perform Someone Like You, Adele was truly on her way to being a global superstar.

Just a year later, in 2012, 24-year-old Adele really upped her game as she opted for a Burberry black floor length gown and started experimenting with a bouncy blow dry.

For the 32nd Brit Award's Adele took to the stage to perform Rolling In The Deep and won best album of the year with her second album 21.

It's the first time Adele stepped away from black in favour of a colour, opting for a deep red Giambattista Valli number, ditching the bouncy blow dry for a short bob and classic red lip.

Adele also took to the stage to perform When We Were Young, changing into a glittery printed Valentino number. Featuring a star detail and deep autumnal shades, Adele looks right at home as she performs at the Brits for her third time.

It's safe to say that the past year has been a real whirlwind for Adele, who broke the internet in September 2021 by wowing fans with two incredible glam covers for both UK and US Vogue.

We had our expectations set high this year, awaiting what we expected to be an exceptionally glam look from the star, and we were absolutely not disappointed.

She took to the stage to perform I Drink Wine in a sparkling golden gown by Valentino, looking beyond beautiful as she performed her fourth ever Brit's performance.

We've loved looking through Adele's best ever Brit looks, and can't wait to see what she pulls out of the bag next year!