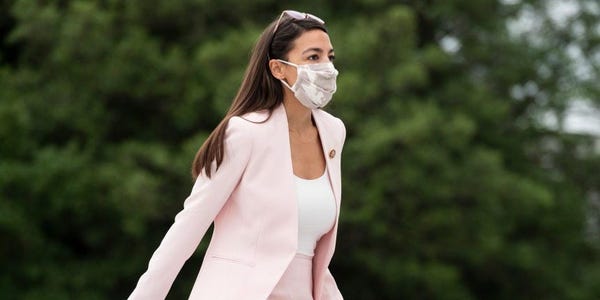 Democratic Rep. Alexandria Ocasio-Cortez of New York is on the cover of Vanity Fair's December issue.

After her interview with the magazine was published on Wednesday, the Daily Mail published an article that broke down the price of Ocasio-Cortez's outfits she wore for the magazine's cover story. The newspaper reported that her clothes were estimated to cost $14,000 in total.

Included in her outfits for the photo shoot — which was captured by photographer Tyler Mitchell — was an ivory silk wool suit from the New York-based brand Aliétte, which she wore on the cover. Aliétte confirmed in an Instagram post that the outfit is from their new collection. The Daily Mail reported that the suit was worth an estimated $1,000.

In other photos from the feature, Ocasio-Cortez wore a Loewe suit, jewelry from Mateo, and a Wales Bonner polka-dot dress. The Daily Mail also reported that she wore a Carolina Herrera suit and heels from Christian Louboutin.

The estimated price of Ocasio-Cortez's clothes sparked backlash from some commentators, who claimed the high-end clothes she wore contradicted with her stance as a Democratic socialist.

Ocasio-Cortez defended herself against the criticism, pointing out that the outfits she wore for the Vanity Fair story were borrowed — as is the case with most clothing used for media and magazine photo shoots.

In a tweet replying to Fox News anchor Laura Ingraham, Ocasio-Cortez wrote the shoot was "100% worth it, would do again."

"And I don't know if you've been in a photoshoot Laura, but you don't keep the clothes," Ocasio-Cortez wrote.

In a subsequent tweet, Ocasio-Cortez issued a tongue-in-cheek response to criticism from Republicans over the shoot.

"Republicans are Very Mad (again) about my appearance," Ocasio-Cortez wrote. "This time they're mad that I look good in borrowed clothes (again)."

Ocasio-Cortez had a similar response to critics in February after the New York Post reported the lawmaker wore a $580 Rickie Freeman dress on The View while the same dress in another color was on sale at Saks Fifth Avenue for less at the time.

"Yep! I rent, borrow, and thrift my clothes. (It's also environmentally sustainable!)" Ocasio-Cortez wrote in February in a retweet of the New York Post's article.

Ocasio-Cortez also faced backlash for wearing Manolo Blahnik heels and other high-end pieces in an Interview magazine feature in September 2018, and in October 2019, she was slammed for reportedly spending $300 on a haircut, which appears to be a pretty standard price for Washington, DC, salons.

In her recently published interview with Vanity Fair, Ocasio-Cortez said that she finds it challenging to dress for the public eye.

"It's legitimately hard being a first-generation woman … and being working class, trying to navigate a professional environment," Ocasio-Cortez said. "It continues to take me so long to try to figure out how to look put-together without having a huge designer closet."

Representatives for Condé Nast, the publisher of Vanity Fair; and Aliétte, Carolina Herrera, Loewe, Mateo, Wales Bonner, and Christian Louboutin respectively, did not immediately respond to Insider's request for comment.