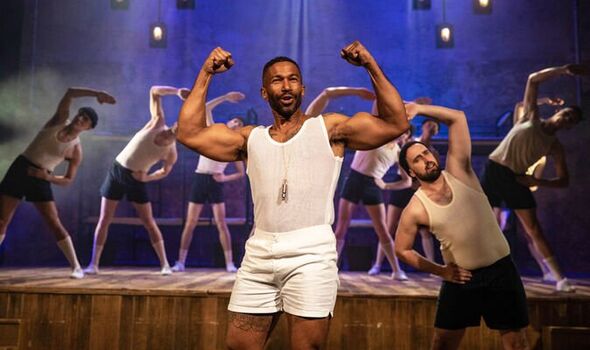 Cradled in the wonderfully crumbling Victorian grandeur of Wilton’s Music Hall, the entire pared-down production makes a virtue of simplicity. Sixteen chaps and a piano, two sets of bunk beds, a couple of ropes and three metal boxes create theatrical magic, elevated by Lizzie Gee’s endlessly exhilarating choreography. I’ve seen grand, lavish productions of this show but this one moved me more deeply and, by stripping the score back to its purist form, made me really listen to those sublime lyrics and melodies. Furthermore, by capturing the intimate intensity of communal productions at single-sex schools and German POW camps (the official programme includes incredible pictures of one such at Stalag 383), it invites you to lean in and become part of the experience. It is the greatest gift theatre can give.

Set at sea during World War II, it opens with sailors lounging around below decks, bantering, working out and noodling on a penny whistle. An imperceptible change of mood fills the air as they begin to dream. Military fatigues are stripped down to shorts, knee-high socks and vests. A small box of props yields the beanies, neck scarves and fascinators that will transform them into the strapping sailors and admiring ladies of Her Majesty’s Navy in the 1870s. And so the stage is set for the jolliest of romps where love must triumph over the Victorian class divide and a little matter of babies swapped at birth.

Humble sailor Ralph Rackstraw (a golden-voiced Danny Becker) loves the Captain’s daughter, Josephine, but she is too high-born for him. Sam Kipling’s astonishing vocals tackle the full range of the soprano role and raised the loudest cheers (there were many) of the night for a spine-tingling The Hours Creep On Apace.

Most extraordinary is the way the absolute sincerity of both actors also delivers some truly touching moments. Their anguish and longing is palpable and when Rafe tenderly draws his beloved close and kisses her on the forehead, the whole audience sighed.

Josephine has been promised to pompous Admiralty boss Sir Joseph Porter by her father, played with ringing tones as impressive as his muscles and an irrepressibly saucy twinkle by Juan Jackson. The Captain, in turn, is loved by Little Buttercup (a playfully strapping Scott Armstrong), a buxom bumboat woman who boards large vessels to sell toiletries, treats and the like.

Sir Joseph arrives, escorted by his ever-present entourage of his sisters and his cousins and his aunts, brought to life with joyous abandon by four of the cast who switch back to swaggering sailors with the twitch of a neck scarf. They’re led by Cousin Hebe, played with ludicrously wonderful physical and facial comedy by Richard Russell Edwards.

Pinafore has sharply timeless points to make about class and Britishness but this exciting and inventive production is also refreshingly informed by the creators’ and cast’s own experiences of gender and sexuality.

Musical theatre by its very nature usually requires fairly major suspension of disbelief, but the addition of lads as ladies requires a delicate balancing act. The actual plot is already silly enough and cross-dressing can easily descend into ridicule, but the five sisters and cousins and aunts deliver such deliciously distinct characters that they transcend the source material and kept my eyes darting about to see what each was up to.

In fact, every scene and every character is filled with clever little touches, with wit and with warmth. The whole show is pure joy, flawlessly flitting from despairing love to riotous comedy, before it merrily sails home on a high tide of happy endings for all.

So, to paraphrase the great G&S, give three cheers, and one cheer more, for this fabulous production of the Pinafore.