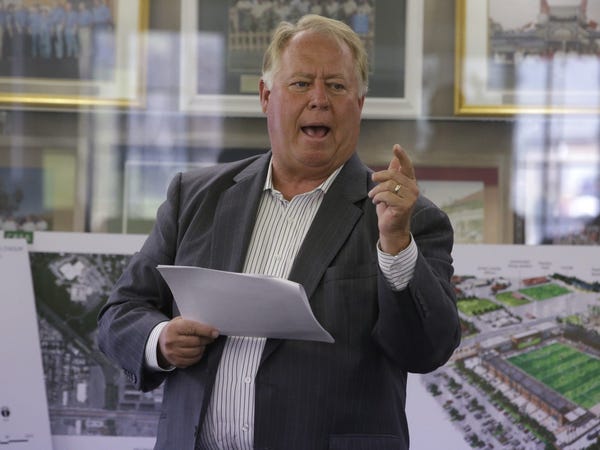 Professional athletes across the nation are choosing not to compete in protest of the shooting of Jacob Blake, a Black man shot seven times in the back by a police officer.

And while many leagues and franchises have been supportive of their players' decisions to abstain from play, Dell Loy Hansen has been a notable exception.

Hansen, who owns MLS club Real Salt Lake, has been outspoken in his disapproval of his team's move not to compete against LAFC as scheduled Wednesday night. In an interview with local show "Radio From Hell," the Utah native and businessman said he felt "profound disappointment" in response to learning his players had chosen to use their platforms to protest.

"It's a moment of sadness," Hansen said, per The Salt Lake Tribune's Alex Vejar. "It's like someone stabbed you, and then you're trying to figure out a way to pull the knife out and move forward. That's what it feels like. The disrespect was profound to me personally."

Real Salt Lake constituted just one of 10 MLS teams whose players chose not to take the field Wednesday evening, following the lead of the athletes in the NBA, WNBA, and MLB who decided against competing earlier in the day.

Less than a day after his team participated in the boycott, Hansen appears to have outwardly retaliated against his players. According to reporting from SB Nation, RSL players were barred from using the club's practice and training facilities on Thursday.

Less than 24 hours after players forced the RSL-LAFC game's postponement, Hansen is facing intense blowback for his words and actions. Real Salt Lake players have expressed deep-rooted concerns about continuing to play under Hansen, and other athletes have stood in solidarity with those speaking out.

MLS has reportedly considered taking action against Hansen. The MLS Board of Governors will convene Thursday evening for an emergency meeting to discuss Wednesday's game postponements and Hansen's future in the league.