Victorian Premier Daniel Andrews insists his relationship with Prime Minister Scott Morrison and the federal government remains as strong as at the start of the coronavirus pandemic in March.

The Premier hit out at reports on Wednesday that continued the stoush over whether Australian Defence Force personnel were available to assist in quarantine hotels in March, saying he believed Victorians were focused on driving down daily numbers, not recriminations over the hotels program. 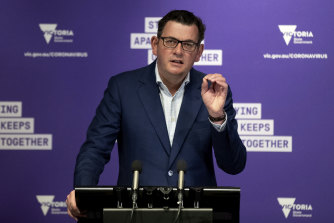 The Victorian and federal governments have disagreed this week over how much ADF support was on offer when Victoria established its quarantine hotels.

Announcing 278 new coronavirus cases and eight more deaths on Thursday, Mr Andrews confirmed he had not raised the disagreement over the ADF with the Prime Minister this week. He said his relationship with Mr Morrison had not wavered since March and the duo planned to speak later this week.

"Victorian problems are Australian problems. We are all in this together. And nothing the Prime Minister has said to me would give me even any doubt whatsoever that this partnership is a strong one," the Premier said.

"Because it needs to be. It absolutely needs to be. And that's why I wouldn't be wasting his time, or mine, talking about these matters."

The Premier said Thursday's 278 infections continued a weekly trend of lowering case numbers but new testing sites would be set up in Geelong, Ballarat and Bendigo to respond to the emergence of "mystery cases" – those without a known source of infection – in the regional towns.

While unity between Mr Morrison's government and all states and territories was lauded during Australia's successful initial response to the coronavirus pandemic in March, tensions between Victoria and the federal government have grown in recent weeks over aged care, overseen by Mr Morrison’s government, as well as the role of ADF support.

"My only quarrel, my only argument, my only fight is with the coronavirus," Mr Andrews said. "No one else. That is my exclusive focus."

The Premier said Victorians were more focused on the state's current situation than political "duelling" over who was responsible for quarantine hotels, where lapses in infection control allowed security guards to spread COVID-19 into the community and spark Victoria's second wave.

"I don't think those who are watching today, and every day, would want me to be spending time on those sorts of political issues," Mr Andrews said.

"They apparently relate to matters that are three or four months old. We're in the fight of our lives right now. And that's what I'm exclusively focused on." 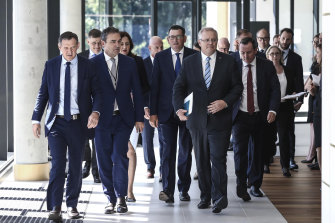 The unity between federal and state and territory leaders was hailed at the start of the pandemic.Credit:Dominic Lorrimer

Victoria had 664 people battling coronavirus in hospital on Thursday, including 37 in intensive care. There are 7866 active cases, down from 7877 on Wednesday, indicating there were more recoveries than new infections for the second successive day.

Deputy Chief Health Officer Allen Cheng said over the past 14 days, 176 new cases of COVID-19 have been detected in Geelong, many of which are connected to outbreaks "which are coming under control", he said.

"But there are certainly some outbreaks and some cases where we don't know where they've come from," the Professor said.

In Ballarat, 23 new cases have emerged in the past two weeks due to three unrelated outbreaks, while Bendigo has recorded 51 cases over the same period.

Mr Andrews also announced the Victorian government will increase the payment to people required to self-isolate following a coronavirus test from $300 to $450.