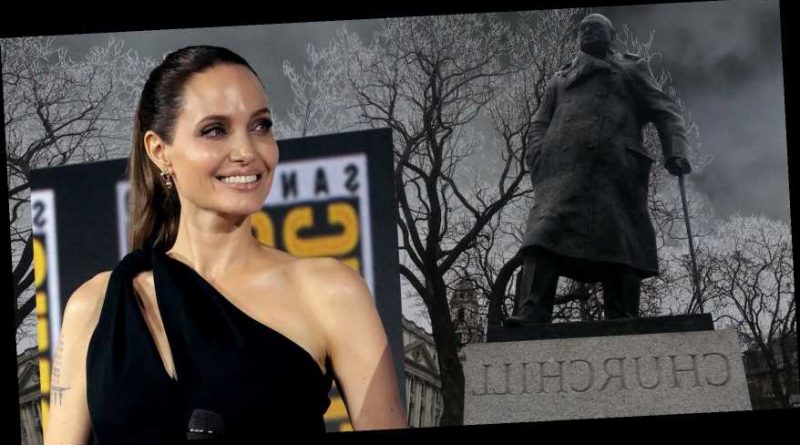 Hollywood star, Angelina Jolie, just sold a painting by the former Prime Minister of Great Britain, Winston Churchill, for a record-breaking $11.5 million. The work of art entitled “Tower of the Koutoubia Mosque” was gifted to Jolie by her former husband and father to their six children, Brad Pitt, when they were still married.

The work itself was painted by Winston Churchill following the Casablanca Conference of 1943 wherein the British Prime Minister and the United States President Franklin D. Roosevelt met to discuss how they would go on to defeat Nazi Germany.

After the conference, Churchill remained in Morocco for an extra day. While in one of his favorite Moroccan cities, Marrakech, the Prime Minister spent the day painting the work of art from the balcony of his 5-star hotel, The Riad Taylor.

According to The New York Times, Churchill told Roosevelt: “You cannot come all this way to North Africa without seeing Marrakesh. I must be with you when you see the sunset on the Atlas Mountains.”

The painting depicts the tall minarets of twelfth-century mosques behind a sun-drenched wall that surrounds the original city. In the painting’s background are the snow-capped Atlas Mountains and there are several people in colorful wardrobes painted in the foreground.

Churchill first began his artistic endeavors in his early forties and completed more than five-hundred works of art over the next forty years. However, according to a spokesperson for Christie’s, the painting “is the only landscape he made during the war.” The spokesperson also noted that it is considered to be “Churchill’s most important work.”

After completion of the work of art, Winston Churchill gave the piece to President Roosevelt as a birthday present. As noted by Christie’s head of British and Irish art, Nick Orchard, “This is Churchill’s diplomacy at its most personal and intense. It is not an ordinary gift between leaders. This is soft power, and it is what the special relationship is all about.”

President Roosevelt then gave the painting to his son, who sold it in 1950 to an art collector in Nebraska. Later, the artwork was sold to Norman G. Hickman, who was a movie producer on the 1964 Churchill-themed film, “The Finest Hours.” After Hickman died, the painting was left to his relatives, where it remained in a closet for over fifteen years before it was finally sold to the New Orleans antique store, M.S. Rau.

In 2011, the work was purchased by Brad Pitt for an estimated $3 million and presented to his then-wife Angelina Jolie as a gift. Both he and Ms. Jolie are avid art collectors and it was revealed to pagesix.com by a source that Mr. Pitt became interested in the life and work of the Prime Minister after filming Quentin Tarantino’s fictional World War Two drama, “Inglorious Basterds.”

After the highly publicized divorce of the Hollywood power-couple in 2016, the Churchill painting remained with Jolie who only recently put the artwork up for auction with Christie’s Auction House of London.

According to the Associated Press, the exact bid for the original landscape came in at $11,590,715.  This was a huge jump from the previous record for an original by Churchill, which sold for an estimated $2.5 million.

Pre-sales expectations for the auction had the artwork estimated between $2.5 million and $3.5 million. The previous record for selling a painting by Winston Churchill was for $2.7 million in 2014 at Sotheby’s London for the painting “The Goldfish Pool at Chartwell”. Therefore, the presumption that Jolie’s painting would sell at auction for a similar price seemed reasonable. However, as the auction began these numbers were easily surpassed as anxious bidders placed their bids in-person and over the phone.

Ultimately, “Tower of the Koutoubia Mosque,” was awarded to a bidder from Belgium who wished to remain nameless.  The same bidder also bought two more Churchill works during the auction. The cost of the three paintings combined totaled almost $13 million.

Bill Rau, of the New Orleans antique dealer M.S. Rau who sold the painting to Mr. Pitt, put it best. “The fact that it sold at auction just goes to show you that important pieces will continue to be coveted and fetch top dollar. The painting has had an unprecedented journey, from being gifted to a US President, to being hidden away in a closet, to being owned by the most famous couple in Hollywood. I’m thrilled that M.S. Rau was able to bring this amazing piece back into the spotlight.”