If you're wondering what to watch during lockdown, two of Australia's screen icons have a few suggestions. 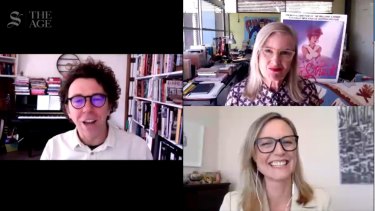 Armstrong said she had binged The Bureau (SBS On Demand) and also found herself re-watching films from places she would like to be.

"I realised I was using films that were taking me to the place that I'd love to be right now, like Tuscany. So I started watching The Talented Mr Ripley," she said. "The other one – if you want to go back to Italy – is The Conformist, which is one of the films that stayed with me all my life."

Dusseldorp said she is watching Stranger Things (Netflix) with her 13-year-old daughter.

"It's the first time we've ever sat down and watched something together and I find that really satisfying. I scream a lot more than she does," Dusseldorp said.

Her other suggestion was bingeing the Coen brothers' work, starting with their 1984 classic Blood Simple.

"Whenever I need to re-centre I watch one of their films because they are so deeply true," she said.

The wide-ranging discussion also touched on some of the key issues for the film industry going forward, including whether lockdown will fundamentally change people's habits around going to the cinema.

Armstrong said the advent of video streaming platforms had not dulled her appetite for cinema.

"I still love seeing something on the big screen in pitch darkness," she said. "The worry is how long before we're going to be able to sit with people.

"I don't think anything really beats seeing something on the big screen."

Dusseldorp said going to the cinema has always been a cost barrier for people and mostly attracted those who really wanted to see a particular film. She is hopeful the reliance on streaming services during lockdown will expose audiences to new works.

"It might create a literacy in people of films that they would never have thought they might taste, but actually end up loving and consuming."

"I think there will always be those people like Gillian and me that love to go and sit in the dark to have that one moment, and that is why I believe theatre equally will return too."

The Age and The Sydney Morning Herald subscribers can watch the discussion on-demand. Stan is owned by Nine, the owner of this masthead.