Aya Cash definitely stepped outside her comfort zone for the new horror comedy “Scare Me.”

The new film, hitting Shudder this Wednesday, revolves around two horror writers who hunker down together in a cabin in the woods and try to out-scare the other as they trade scary stories when the power goes out.

Much of the film hinges on good, old fashioned storytelling — as Cash’s Fanny, a bestselling author, and writer/director/star Josh Ruben’s Fred, a wannabe, spend most of the movie speaking directly into the camera. With both of them fully embodying the characters in their tales, it’s a movie that asked a lot of physicality from the stars … and even a little lip-synching. 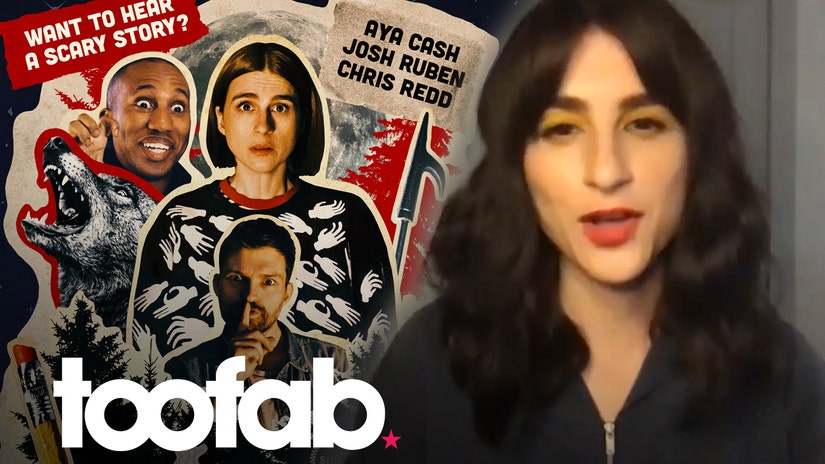 “It’s really fun, I come from theater, that’s sort of how I started acting, so it’s always fun when you’re able to do long scenes and really run into something,” Cash told TooFab about the film. “And this sort of one space, let’s make it work with what we have kind of mentality feels very theater.”

Praising costars Ruben and SNL’s Chris Redd, Cash said the duo are “two of the funniest sketch people” she knows and marveled at how they were able to create characters and transform during filming. “Trying to keep up with the two of them was my challenge,” she added.

While the movie weaves together stories of werewolves, creepy grandparents and murderous trolls, the tale that really steals the spotlight is that of a satanic pop star — a story which required Cash to perform a devil-worshiping solo during an “American Idol”-type reality competition.

“But, yeah, there’s a great musical number that sort of takes us outside the reality of the cabin. I’m lip-syncing to a beautiful singer,” she teased. “It’s like a whole choreographed number, which is a blast! I mean every horror movie should have a musical number, in my mind.”

Quite a few, including “Anna and the Apocalypse,” “The Rocky Horror Picture Show” and “Stage Fright” all do, as does one of Cash’s favorite movies, which she revealed when asked which horror movies she can’t get enough of.

“I’m not like a huge horror person. ‘People Under the Stairs’ was my first horror movie I could remember and I still think it’s brilliant,” she said, before asking whether “Beetlejuice” — a film with two musical numbers — counts as horror. We’ll allow it.

“‘Beetlejuice’ is one of my top movies of all time,” she added. “So, I would say that, but I’m definitely not like a slasher kind of horror girl. It’s not my taste.”

Hopefully “Scare Me” is your taste when it hits Shudder on October 1.