Home » Lifestyle » Back to the Future the Musical: Great Scott! The West End’s about to hit 88mph (EXCLUSIVE) 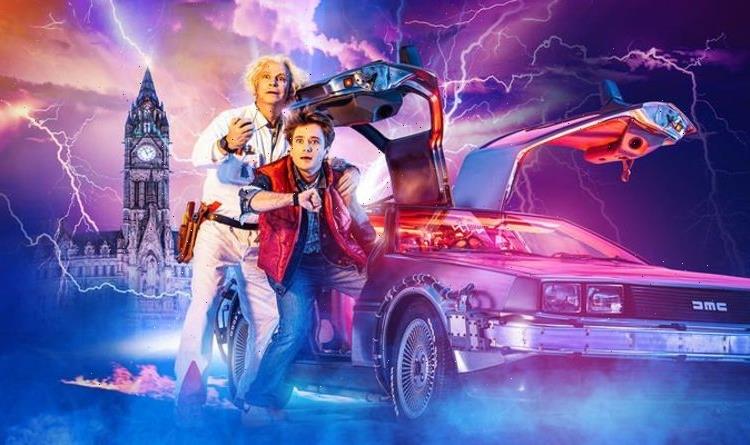 Back to the Future musical previews London theatre show

Over the years many classic movies have been adapted for the musical theatre stage, some better than others. But there has never been a Back to the Future the Musical, until now. And from what Express.co.uk discovered from sitting down to chat with those involved, this is no cynical cash-in.

Over 14 years in the making and Back to the Future trilogy director Robert Zemeckis and screenwriter Bob Gale have been just as much the creative force behind the stage version as they were the movie back in 1985.

Back to the Future theme composer Alan Silverstri, who has returned to work on the musical’s songs, told us: “Like Bob Gale says, ‘I always had the red button.’

But lucky for fans, that never happened. Instead, the original team had no problem in taking their time to get the musical version just right, even if it would take them years. In fact, the new production’s origins go right back to 2005 with a visit to see a musical adaptation of a Mel Brooks comedy classic.

The first idea for a musical version of Back to the Future was suggested by Zemeckis’ wife Leslie, after the couple saw The Producers at the theatre. The director shared this thought with Gale, who saw the movie version of the show and remembered thinking: “If we can do this kind of stuff, it might just work!”

Fast-forward to February 2006 and the two Bobs had their first meeting with Silvestri and lyricist Glen Ballard, who had both worked on the music for Zemeckis’ Christmas adventure The Polar Express. The screenwriter said: “And then we started trying to figure out, well how do we actually do this? Because none of us had ever had any experience in musical theatre.”

Gale admitted they never even considered adapting the whole Back to the Future trilogy into a musical. He said: “It could only ever be the first movie. That would be crazy trying to all three of them.”

But even with just the story of the original, some of the theatre producers they met with didn’t believe it could ever work on stage. Nevertheless, as the years went by Back to the Future the Musical was slowly coming together.

Back To The Future Musical: Roger Bart stars as 'Doc' Brown

While Gale was busy working on the book and production, Silvestri and Ballard got to work on the songs. The Back to the Future composer remembered agreeing to return to the franchise immediately. Silvestri said: “It was yes from the very beginning. Yes to what we didn’t exactly know.” They began with a couple of tracks including what became the musical’s opening number It’s Only A Matter of Time.

After showing the songs to the co-creators, Silvestri remembered: “The two Bobs laughed all the way through it and afterwards we were like, ‘Damn! This could work as a musical!’ Despite the Hollywood group’s lack of experience in theatre, Gale reminded them all: “Hey let’s remember this moment boys. When we did our first movie we’d never done a movie before.”

So Silvestri and Ballard were given total creative freedom to try anything. The composer said how, unlike movies, you can’t do close-ups in musical theatre, but you can pause time and go inside a character with a song. “We’re doing that all over the musical”, he added.

Although Silvestri is the composer and Ballard the lyricist, both were insistent that they pretty much entirely shared both roles, picking up guitars and a pad of paper together to brainstorm each number into being. And apart from working on albums for the likes of Michael Jackson and Ringo Starr over the years, since their first meetings Ballard ended up working on Ghost the Musical, so he was becoming more and more familiar with how to adapt a classic film for the stage.

Ballard told us: “We discovered it lends itself perfectly to a two-act musical because we go to the fifties and we go to the eighties. From a musicians’ standpoint, just getting the flavours of those two periods’ music, which are quite different, gave us an opportunity.”

The lyricist also confirmed that the Back to the Future theme tune would naturally be popping up frequently. He continued: “We’re using it extensively throughout because every time you hear a note of his score you’re back in Hill Valley. So we already have a time machine, it’s called Alan Silvestri’s score. We just used it in the most strategic and beautiful way, interwoven with new songs and we still have the greats from the movie: Johnny B Goode, Power of Love, Back in Time, Earth Angel. We never wanted to dance around it. We wanted to firmly embed them where they belong. For us, it was just a gift.”

Originally, Back To The Future the Musical opened in Manchester last year before plans to move to the West End. However, the pandemic saw the run-up North shortened and the cast and production team stuck in lockdown with the rest of the world. Nevertheless, Silvestri and Ballard continued working on the music together via Zoom in that year-long gap.

The latter added: “We’ve been tinkering with it ever since! We’ve gone through it with a fine-tooth comb and we’ve refined a lot of it.” But aside from getting the music right, doing the same for the starring roles would be paramount, especially given how iconic Doc Brown and Marty McFly are as characters.

Aside from original Back to the Future movie stars Christopher Lloyd and Michael J Fox, the musical would be the first time Doc and Marty were played in live-action by other actors. So the pressure was on to get the casting right. But since the films are so well known, during the audition process there was no need to explain who they were. Gale remembered: “They understood immediately who these characters were.”

Marty McFly star Olly Dobson, who is an uncanny Michael J Fox lookalike on stage, saw the movies as a kid and always wanted to be the time-travelling teen. For him, it was a dream come true. While Back to the Future the Musical has come round full circle in casting Roger Bart as Doc Brown, who started in both the stage and movie versions of The Producers musical.

The actor, who was also the singing part of Hercules in the Disney animated classic, has fond memories of seeing Back to the Future in the cinema when it first came out. He told us: “I saw it in the movie theatre with a few of my friends when it first released in ’85 and we all loved it! The perfect comedy.”

And while he did get to hang out with Christopher Lloyd in Manchester during the show’s first run, they didn’t talk so much about playing Doc Brown as they did about their lives in show business. Although Bart admitted: “I gave him a little bit of a hard time for not giving Einstein a treat after sending him back in time the DeLorean!”

As for playing Doc and Marty on stage, Gale asked his leads and the likes of the Biff Tannen, George McFly and Lorraine Baines actors not to imitate their counterparts in the movies, but to make them their own.

Of course, Bart had something of an actor’s dream in playing three versions of Doc. He said: “There’s the older Doc that you meet first, then there’s the younger Doc who’s kind of flailing a bit in the invention world and then you actually meet the older Doc who has made adjustments.”

Teasing his solo numbers, the musical theatre star told us: “One is an appropriate celebration of my latest invention and the other is a peek into the world of a person who is unafraid to take chances…”

While on working with Marty actor Dobson, Bart added: “I lucked out. He’s a great kid. He’s an extraordinary singer and he’s present with me on stage.” But then there’s the third star in the Back to the Future musical to consider too.

Back to the Future’s DeLorean time machine is, without doubt, one of the most famous movie cars in cinema history. While not every memorable scene from the movie could feature in the musical due to the limitations of theatre, seeing this baby hit 88mph was non-negotiable.

Gale shared: “We had to use the medium of theatre to the best advantage.” The Back to the Future screenwriter knew they couldn’t have a car chase with the Libyan nationalists on stage, nor a skateboarding scene for risk of his Marty star breaking an ankle.

He continued: “But we also said we cannot not have a DeLorean. We cannot not have it go to 88mph. How are we going to do that? And the answer was, ‘I don’t know! So let’s hire the best people we can find and say here’s your challenge. Figure out how we do this. And lo and behold they did.”

The result, especially in the show’s astounding ending that may or may not need roads, is the stuff of the latest visual effects wizardry that will leave fans satisfied that Gale and his team took as long as they did making this musical.

The Back to the Future co-creator said that after Zemeckis saw the production for the first time at Manchester’s opening night, the Oscar-winning director had tears in his eyes and later uttered: “It’s as good as the movie.”

Back to the Future the Musical is playing at the Adelphi Theatre in London and tickets can be booked here.