Home » Lifestyle » Basement Parties Are Back: Inside Unemployed and Frame’s Pride Dance Party 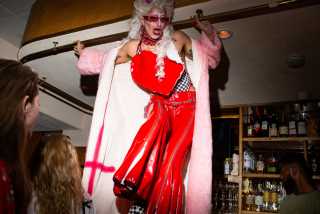 “Grab your friend, do some coke, do whatever the f–k you need to do to get ready. OK, honey?”

Safe to say we’re back, baby — and if you obeyed Chiquitita Friday night on the above instructions, odds are you’re pretty happy to be back on the scene at that.

In honor of Pride Month, Unemployed magazine and Frame threw a late-night dance party in the basement of Lower East Side hot spot The Flower Shop, which featured drag performances, Yola Mezcal cocktails, music by Silvia Prada and the nearly forgotten art of pushing your way past sweaty, glamorous strangers, not a bar of cell service to be had, dancing underground until the wee hours.

The party drew the kind of crowd where everyone looked like they might be someone — and there were plenty of someones at that. Olivia Wilde, Eiza Gonzalez, Zoe Lister-Jones, Rebecca Dayan, Lorenza Izzo, Jordan Barrett, Jacquelyn Jablonski, Jason Wu and Tina Leung all made appearances over the course of the evening, which turned into a full-on dance party around midnight.

“Is this a full body?” drag king performer God Complex asked, before strapping on a bright red horn to their groin area for photos and striking a pose like their life depended on it.

Barrett requested soda water and bitters, while spending most of the night seated in a booth. He was a rare seated guest, though: most were on their feet dancing, especially huddled together for the big performances.

Chiquitita, who performed first, got the crowd revved up. The night was billed as a bingo party, and while cute looking bingo cards were laid out on the bar, it was clearly more decor than anything.

“Oh, we’re not doing bingo by the way — that’s, like, not happening,” Chiquitita said. “That’s like canceled as f–k.”

The all-trans cast of performers — Chiquitita, Cover Gworls and God Complex — each took turns wowing the crowd, only breaking for a mysterious water leak, during which Wilde, Lister-Jones and more were ushered in. Within minutes, they were dancing in their seats to Prada’s Madonna remixes and snapping pictures of the performers. Gonzalez attended with rumored new boyfriend Paul Rabil, a professional lacrosse player, who seemed a little out of his element but a good sport nonetheless.

Guests were given a limited-edition, long-sleeve T-shirt and bucket hat made by Frame, with 100 percent of profits donated to GLITS, the nonprofit organization helping the health and housing crises faced by the trans community.

“We support everything and everyone,” said Frame’s Erik Torstensson, who credited his longtime friend and cohost Ceclie Winckler of Unemployed with the night’s success. “It’s not a strategy, it’s just our friends, It’s not corporate, it’s just what we care about.”