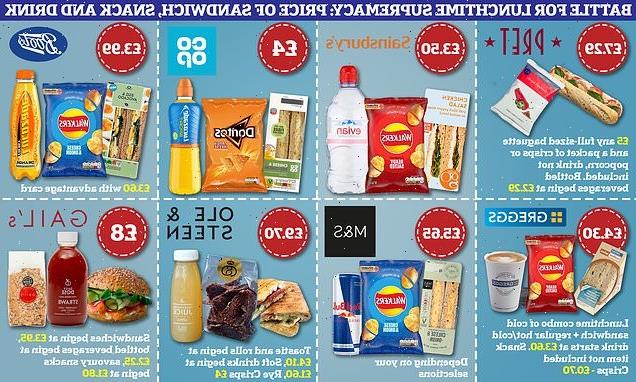 Pret A Manger has dropped its prices to lure in more lunchtime customers in a warning to High Street rivals and supermarkets amid the cost-of-living crisis.

The sandwich franchise has launched a price-cutting mission as it tries to ‘give customers more choice and value for money’ and compete with the notorious meal deals sold at places like Sainsbury’s and Co-Op.

Beginning next week, hungry deal seekers will be able to buy a baguette with a bag of crisps or popcorn at Pret for £5 – still pricier than the £3.50 bargain at Sainsbury’s that gives shoppers a sandwich, crisps and drink.

However, not all eateries are dropping prices to appeal to financially strapped consumers. Some chains – including Greggs – have actually raised prices to combat record-high food inflation costs associated with the ongoing economic crisis. 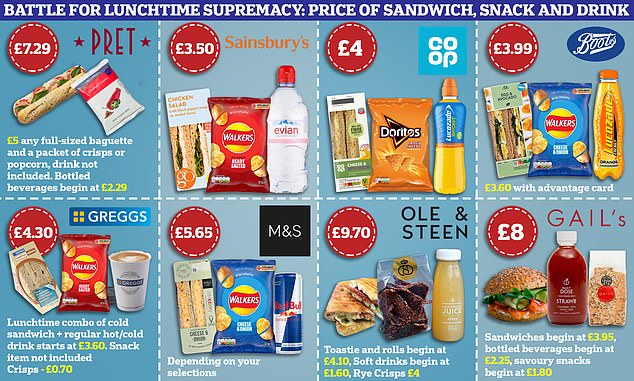 Customers will be able to get a a full-size baguette and snack for just £5. The company will also sell its Made Simple range – which includes eight freshly made sandwiches – for £2.99.

‘With the cost of living crisis impacting people across the country, this year we wanted to introduce new products and deals that give customers more choice and value for money, whilst ensuring our fresh food and delicious tasting products are not compromised,’ interim UK managing director Guy Meakin told MailOnline.

However, the franchise’s bargain deals don’t include a drink and – despite being discounted – are still costlier options than rival Greggs which, for example, sells a tuna crunch baguette for just £2.75.

Greggs recently raised the price of its beloved sausage roll to £1.20, marking the product’s fourth price hike in 12 months.

Chief executive Roisin Currie told The Sun the company had to increase its prices because of high energy costs and food inflation, but insisted their food was still a ‘very good value.’

British families seemed to agree because the chain’s sales in the final three months of 2022 were 18.2 per cent higher than in the same period a year earlier.

So, where can you go to get the best deal for your meal?

MailOnline has compiled a list of lunchtime hot spots and how much you can expect to spend on your food.

UK Meal Deals: The Real Cost of a Sandwich, Crisps and Beverage

One of the most affordable meal deals in the UK is sold at Sainsbury’s. Customers can get a main, snack and drink for just £3.50.

The supermarket offers a vast of variety of products that are eligible for the meal.

Shoppers can opt for a traditional combination of sandwich and crisps or get a healthier product, such as a salad, with their lunch.

Salisbury’s also offers a £5 meal deal, which operates on the same main, snack and drink forma includes a host of more expensive main options. The eligible snacks and beverages remain the same.

Some of the premium mains costs as much as £4.50 each, so combined a pricier drink or snack, shoppers could get more than £8 worth of food for just £5.

Tesco Club Card holders can get a meal deal for £3.40. The meal costs £3.90 without a card. Sainsbury’s bargain costs the same for all shoppers.

The standard price of a Boots meal deal is £3.99. Customers who have signed up for the Boots Advantage Card loyalty scheme will get the deal for £3.60.

Similar to the promotions offered at Sainsbury’s and Tesco, Boots’ meal deal includes a sandwich, snack and drink.

However, the nearly £4 price isn’t all inclusive across the UK. The deal costs £4.99 in London. Loyalty card holders will pay £4.50 in the capital.

Boots actually increased the price of its meal deal last October, likely due to the impacts of the cost-of-living crisis.

October marked the second time last year that Boots raised the price of its bargain lunch scheme. It had previously hiked prices in March 2022. 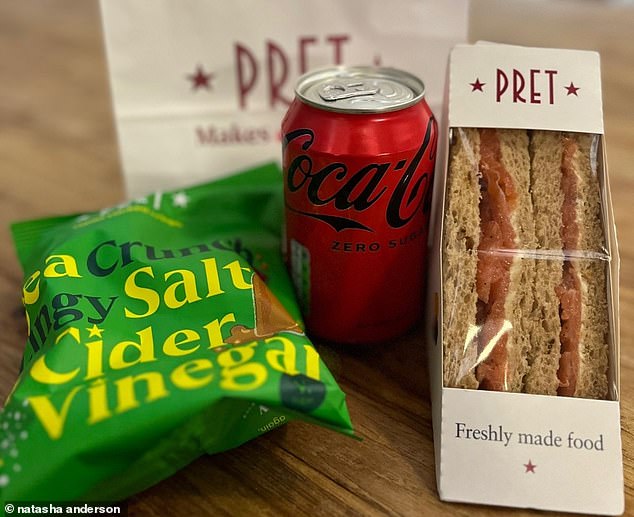 The meal deal includes a vast selection of mains including sandwiches, salads, pasta and sushi. Some locations even offer soup or filled naan.

The supermarket’s also has a large variety of eligible snacks, including a cornish pasty.

However, what makes Co-Op stand out from its rivals is the fact that students can use their 10 per cent discount at the till and save up to 40p on their lunch.

Greggs offers a selection of varying meal deals, starting at £3.60 for a cold sandwich and regular hot/cold drink.

Customers can also get a hot sandwich, wedges and drink from £4.80.

The bakery also has as a selection of other snack and drink combinations ranging in price from £2.70 to £3.60.

However, none of Greggs options offer the traditional sandwich, crisps and beverage combination.

Greggs does however offer a discount programme for students that gets them a free sausage roll, vegan roll or sweet treat with the purchase of a cold sandwich meal deal. 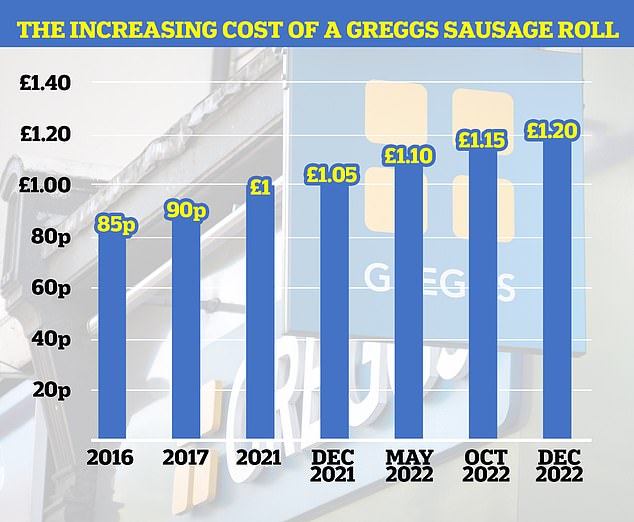 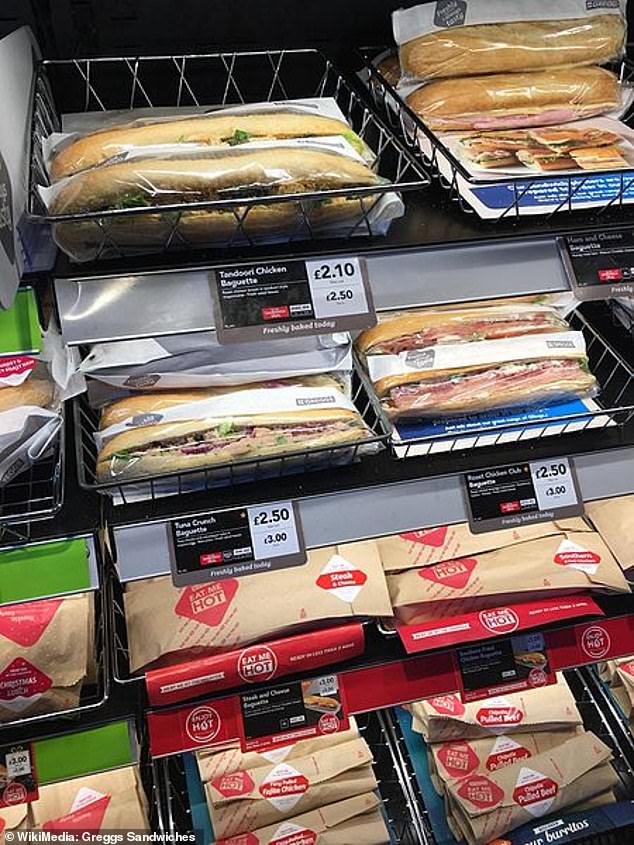 Greggs offers a selection of varying meal deals, starting at £3.60 for a cold sandwich and regular hot/cold drink

Will the cost of living go down in 2023? Click here for more on when the price of energy, food and petrol might start to fall… and why it might take longer than expected 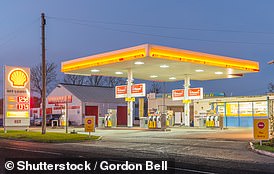 The chain recently raised prices of its some of its products, including sausage roles which rose from £1 last January to £1.20. In some cities such as London, the product is as costly as £1.45.

Despite the hikes, Greggs said sales in the final three months of 2022 were 18.2pc higher than in the same period a year earlier when business was hit by Covid restrictions.

Chief executive Roisin Currie previously told The Daily Mail: ‘While market conditions in 2023 will remain challenging, our offer of freshly prepared food and drink is highly relevant as consumers look to manage budgets without compromising on quality and taste.’

Shoppers will spend around £5.65 for a sandwich, crisps and drink at M&S, depending on their product selections.

The grocer has a vast selection of lunch items, but not an official takeaway meal deal.

M&S does offer its Gastropub Dine In meal for two at just £6 per person. It includes a main, side and a starter or dessert.

The grocer also offers an assortment of dine-in deals such as Stir-Fry Dine In for two – which totals at £7 or £3.50 each.

It also hosts a Pizza Night Dine In, offering two pizzas and two sides, all for just £12.

Pret has launched a brand new savings deal on its baguette and expanded its Made Simple value range this year in attempt to battle the cost-of-living crisis.

Under the new menu, customers can buy any full-size baguette with crisps or popcorn for just £5. The lunch deal runs throughout January at participating shops.

The company also expanded its Made Simple to include eight freshly made sandwiches starting from just £2.99.

However, a soft drink is not included in the so-called meal deal, meaning that customers would actually exceed £5 to have a beverage with their lunch. 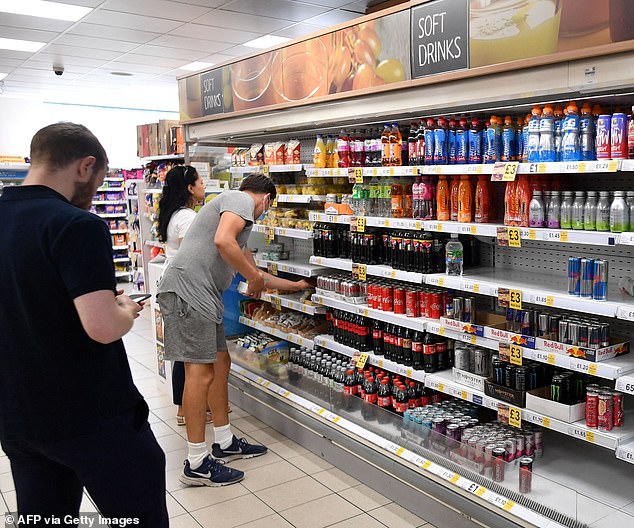 Tesco Club Card holders can get a meal deal for £3.40. The meal costs £3.90 without a card. Shoppers are pictured buying meal deal items at a central London store in 2021

Greggs increases price of a sausage roll by 5p to £1.20: Click here to read more 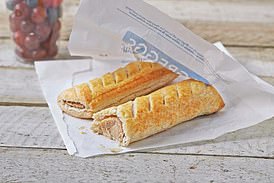 Gail’s is one of the pricier options to get lunch in the UK.

The bakery offers customers a large range of soups, salads and sandwiches.

As the cafe does not offer a traditional meal deal, shoppers will have to build their own lunch combination.

As bottled beverages begin at £2.25, customers will be spending at least £8 on their meal.

Ole & Steen is one of the costly place on MailOnline’s list to get lunch with a sandwich, crisps and bottled beverage running you at least £9.70.

The beloved bakery offers a range of toasties and rolls with the least expensive – a rye roll with cheese, butter and ham – starting at £4.10.

Other sandwich-like options, such as its smokes salmon roll, sell for £5.75 and up. The bakery’s rye crisps cost £4.

The firm, which places more emphasis on its coffees and teas than bottled beverages, also sells a selection of soft drinks for as little as £1.60.

However, because the eatery is not offering any sort of meal deal, Britons should expect to spend closer to £10 on their lunch. 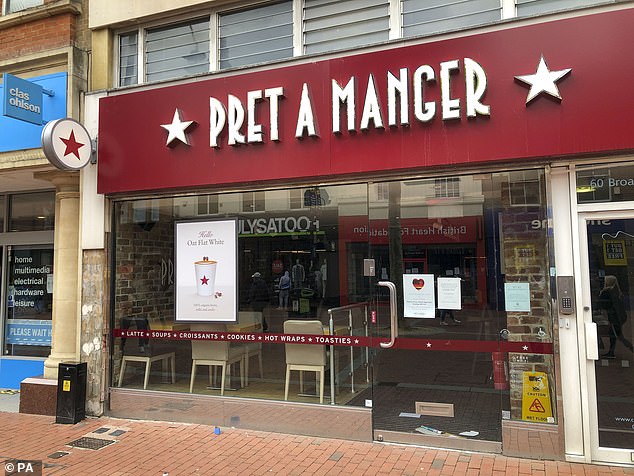 Pret has launched a brand new savings deal on its baguette and expanded its Made Simple value range this year in attempt to battle the cost-of-living crisis. Under the new menu, customers can buy any full-size baguette with crisps or popcorn for just £5. The lunch deal runs throughout January at participating shops

Food inflation accelerated to 13.3 per cent in December after having been 12.4 per cent in November.

The BRC claims December’s food inflation rate is the highest monthly rate on record since the firm began collecting data in 2005.

The three-month average food inflation rate was 12.5 per cent.

But despite soaring food inflation, British households spent more than £12billion on groceries over Christmas – the highest amount on record, new figures show.

The total value of sales has risen because of the increasing cost of food and drink, rather than because people are spending more, according to Kantar’s monthly monitor.

In fact, the volume of sales was down by 1 per cent over December, compared with the same period last year, indicating that shoppers are facing a much more expensive grocery shop, Kantar said.

Gas and electricity costs are unlikely to return to ‘normal’ until the 2030s, according to analysis from industry experts Cornwall Insight.

The average annual bill is set to rise from £2,500 to £3,000 in April, which means families and businesses will be paying more next winter.

Analysts said the price would be as high as £4,174 if the figure was linked to international wholesale prices and not limited by the Government’s energy price guarantee.

First-time buyers may also find that getting approved for a mortgage is more difficult, as higher interest rates combine with the cost-of-living crisis and higher rents to putting additional pressure on household finances.

The rapid rise in rates has also had an impact on those looking to remortgage. Remortgaging approvals fell 37 per cent in November compared to the previous month, and down 30 per cent compared to November 2021.

Similarly, motorists are preparing 12p a litre hike in the price of petrol and diesel this spring by the UK’s spending watchdog.

The Office for Budget Responsibility is planning a 23 per cent increase in the fuel duty rate’ in late March.