BBC man Frank Gardner has an alter ego, a secret agent who’s tough, handsome and a magnet for trouble. So is the hero of his new thriller based on his own escapades in danger zones? Well, he explains… I turned down MI6 – I’m far too vain to be a spy!

In theory, Frank Gardner would have made a marvellous spy. The son of two diplomats and an Arabist with a taste for the army and adventure, of course MI6 knew all about him.

They even brought him in to consider his international covert career options. ‘It was in SW1, just off Waterloo Place. I’d done the initial vetting exam but then the interviewer said, “You must understand that if you are lucky enough to be chosen you will not be able to claim any public credit for your success.” I thought, that’s not for me, I am far too vain. And look, now I’m in television instead.’ 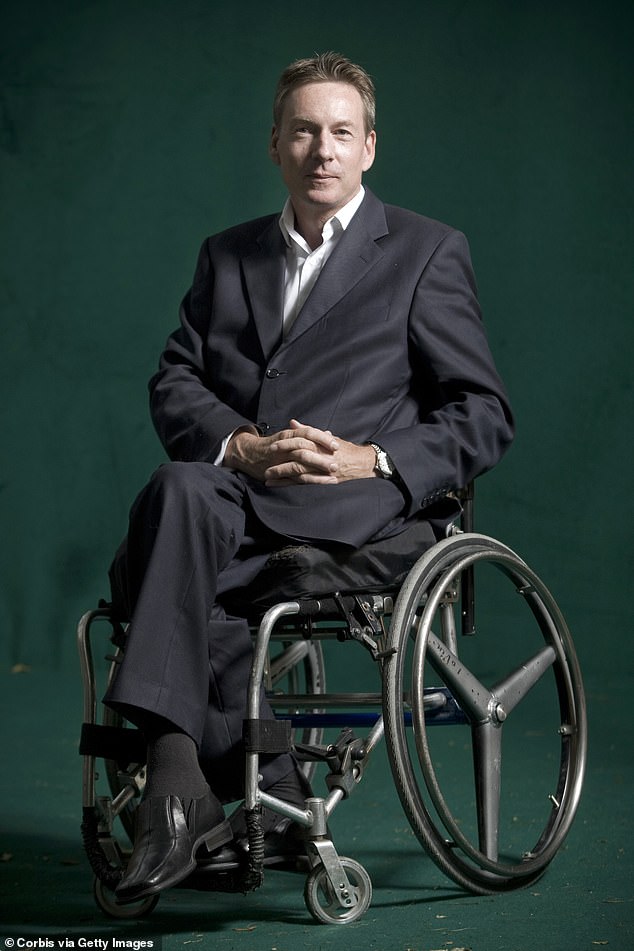 ‘I still get people who think I am a spy or a mouthpiece for MI6, but that’s ridiculous,’ Frank Gardner says. ‘I live my life in the open, absolutely.’

Her Majesty’s loss was Auntie’s gain. Gardner, 56, is the BBC’s security correspondent and one of the most respected journalists working in Britain today. Thanks to the wheelchair he uses after being gunned down on assignment in the Gulf, he’s also one of the country’s most recognisable.

Anyway, as an author – his second spy thriller, Ultimatum, comes out later this week – he gets to live a spy’s life vicariously through his fictional creation, Luke Carlton. So is Carlton – tough, loyal, clever, and a terrible trouble magnet, whose work-life balance mostly consists of saying sorry – actually Gardner’s alter ego?

‘Mentally parts of him are, yes, but physically no. I have never been in Special Forces and Luke is fitter than I ever have been…’ There’s a broadcaster’s pause and then he adds, ‘In both senses.’

The well-timed punchline is accompanied by the faintest lift of an eyebrow, the kind trademarked by Sir Roger Moore. Indeed, the man who used to play Britain’s most famous spy, James Bond, was a dear friend. They first met near a men’s loo in Broadcasting House. ‘You never know who you will meet on the way to the john,’ Moore used to tell him. Afterwards the actor would raise a glass to Gardner as he skied the grand slalom past the Moore family’s chalet in the Swiss resort of Crans-Montana. It was a reminder of his standing invitation to pop in for an expertly mixed martini. 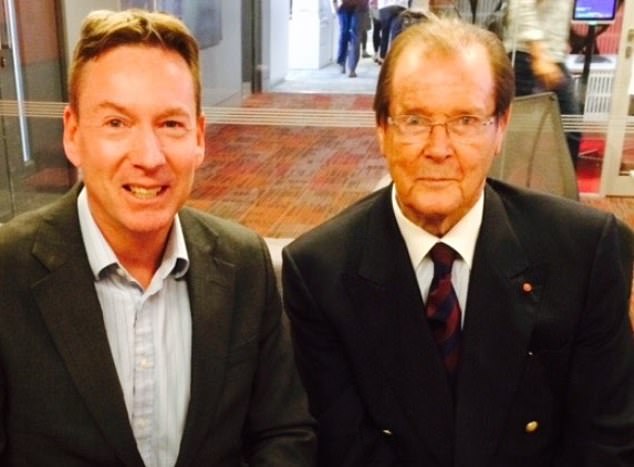 ‘The last time I saw him before he died, Roger invited me to Scott’s [the Mayfair restaurant that was a favourite of Bond creator Ian Fleming]. I binned the 1pm news, told them I had a better offer. But it was a hot summer day, hugely noisy, and all I could hear were gems such as “and I’ll tell you something else about Grace Jones… mumble mumble mumble… with all her clothes off!” And I’d be saying, “How Roger? How did Grace Jones end up with no clothes on?” But there are only so many times you can ask someone to repeat themselves. And now I’ll never know.’

Luke Carlton is definitely not Bond – he drinks winter punches in Chelsea’s Bluebird restaurant for one thing. But he is rooted in truth. When Daniel Craig’s Spectre came out in 2015, Gardner persuaded MI6 to allow two real-life 007s to speak about their work. ‘I interviewed them face to face. One of them told me, “We are not like James Bond, s****ing our way around the world,” and that’s something I put into Luke’s character.’

So when British intelligence leans on Carlton to honey-trap a female asset in Iran, the setting for Ultimatum, he’s reluctant. The BBC’s veteran diplomatic editor, John Simpson, was famously the target of a Soviet-era honey trap, so has anything similar ever happened to Gardner?

‘Not knowingly, though God that would have been fun when I was single,’ he says saucily. ‘Once in Saudi I was picked up on an internal flight by a princess. We chatted about Western music and she suggested she came to my hotel room that night to collect some cassettes. I bottled it. I would have been carted off and flogged and it would have been the end of my career. I would have been banned from the region. The stakes were too high.’

He was working in the oil business at the time, and had also had a banking career in the Gulf. That’s what he was doing when he met his wife Amanda, who gatecrashed a party he was throwing in Bahrain. The couple, who live in London, have been married 21 years and have two daughters, aged 20 and 19. 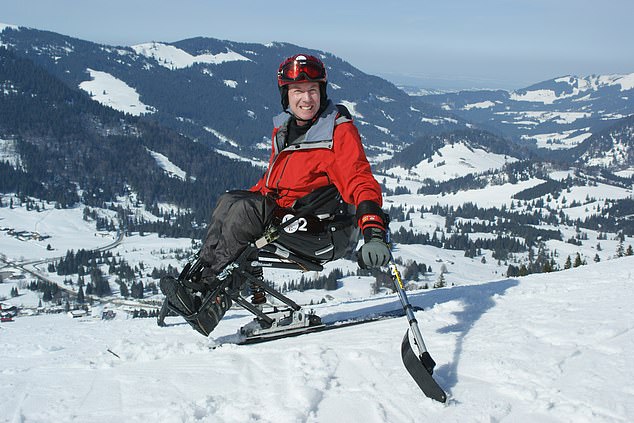 Gardner may be one of the corporation’s most famous faces and in a wheelchair, but he would never wish for special treatment

The fact Amanda fell in love with a businessman and ended up being married to a news junkie with 105 of the world’s countries stamped in his passport is why Gardner can write so well about Luke Carlton’s divided loyalties. (It’s also worth saying he almost joined the Army but his parents persuaded him to put his Arab degree to better use, so he joined the Territorials instead.)

‘I write about Luke’s doubts, his guilt, his conscience. Anyone who has worked in foreign news feels permanently guilty about going away. When I was Cairo correspondent in 2000-2001, Egypt was quiet so I was always being sent to Gaza, Damascus, Kuwait, Yemen. My wife would say, “How long are you back for?” I’d say, “I have no plans to travel for three weeks…” and then the phone would ring and you could sense her thinking, please don’t take that call. But you have to, knowing it could be an interview with John Humphrys on Radio 4 in the morning or someone asking, “How soon can you get to Baghdad?”.

‘There was one Christmas I spent lying in the dunes at a desert air base in the UAE on my own, without a crew, mobile phone in one hand, binoculars in the other, reporting live on an Al Qaeda plane hijacking. It was exciting but Christmas had to be, er, delayed. That is what I am trying to recreate for Luke.’

We are talking in Broadcasting House in a teeny glass-walled booth. Gardner may be one of the corporation’s most famous faces and in a wheelchair, but he would never wish for special treatment. All he asks is that able-bodied people stop using disabled toilets and disabled parking spaces.

‘It happens even here at work. Everyone who “just nips in” thinks they are the exception, they’re not. They have a choice, I don’t. This loo or that space are the only ones I can use.’

He doesn’t want to be an ambassador for the disabled community, though he leverages his public profile for issues that directly affect him, and is happy if this benefits others. He made headlines earlier this year when he was abandoned on an empty plane for 100 minutes after his wheelchair went missing. He confronted Heathrow’s chief executive, John Holland-Kaye, demanding that chairs are brought up to plane doors as standard, and hopes to see the change implemented from next month. 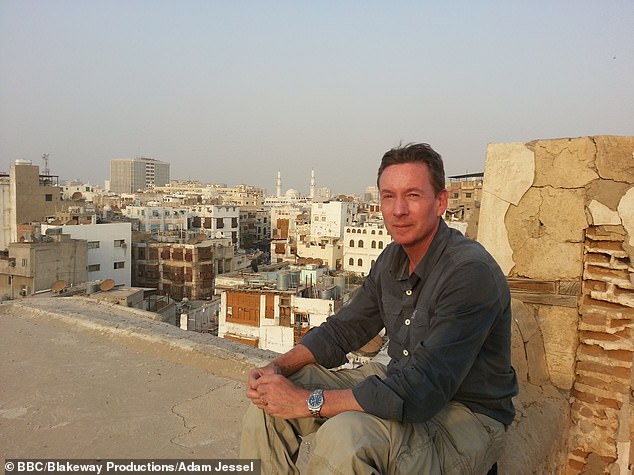 In his dreams, Gardner says he is still able-bodied. ‘I can walk upstairs or I am standing, and I think, “Oh, that’s nice”.’

‘Duh, it’s pretty simple. I can’t get off the plane without my wheelchair because that’s my legs. I am not a serial complainer but I will hold their feet to the fire on this issue.’

He has a robust attitude to his disability, saying, ‘I’m not very PC about it.’ One of his team calls him ‘Cheap Dolly’, referring to the small wheeled platform used by TV cameramen, because camera phone footage shot from Gardner’s lap supported by his wheelchair is stable enough for broadcast. A video of F15 fighters taken on a Saudi airbase this way recently made it onto the ten o’clock news. Even the attack that crippled him is described as ‘me being slotted’, Army slang for shot.

That was back in 2004, when Gardner and his cameraman Simon Cumbers were working in Saudi Arabia. They were gunned down by a group of Al Qaeda sympathisers: Cumbers was killed and Gardner left for dead.

He survived with an injury called L3 incomplete – the L stands for lumbar. His legs have minimal sensation from the knees down, while above the knee he can feel them a bit but can barely move them.

He has hideous nerve pain and sleeps sometimes only three hours a night. He won’t take medication, not just because it made him grow man boobs – more because he wants his first-class mind to be untouched by drugs. Instead he manages it with distraction, a hot bath, cycling and playing the puzzle game Tetris. ‘It’s like a matador with a bull waving a red flag and shouting, “Come this way, come this way” – you have to distract your brain.’

The long-term legacy of the attack also includes osteoporosis in his legs, bladder stones that may soon require surgery (they become carcinogenic) and kidney stones in hot climates. He declares himself lucky, regardless. In his dreams, though, he is still able-bodied. ‘I can walk upstairs or I am standing, and I think, “Oh, that’s nice”.’

Today he bustles on with his changed reality, working, writing, loving his family life, skiing on a sit-ski, bird-watching and travelling. He finds people kind and helpful and sometimes friendlier than before. ‘People pat me on the shoulder. I don’t mind as long as they’re not rubbing Novichok into me.’

Ultimatum is being published at a time when President Trump and Tehran are playing brinkmanship over Iran’s nuclear capability and a small ‘hot war’ between Iran and Israel is under way on the proxy battleground of Assad’s Syria.

Gardner, of course, will be on screen, objectively reporting, analysing and predicting what it all means.

‘I still get people who think I am a spy or a mouthpiece for MI6, but that’s ridiculous,’ he says. ‘I live my life in the open, absolutely.’

Still, I bet he would have been good in the shadows.