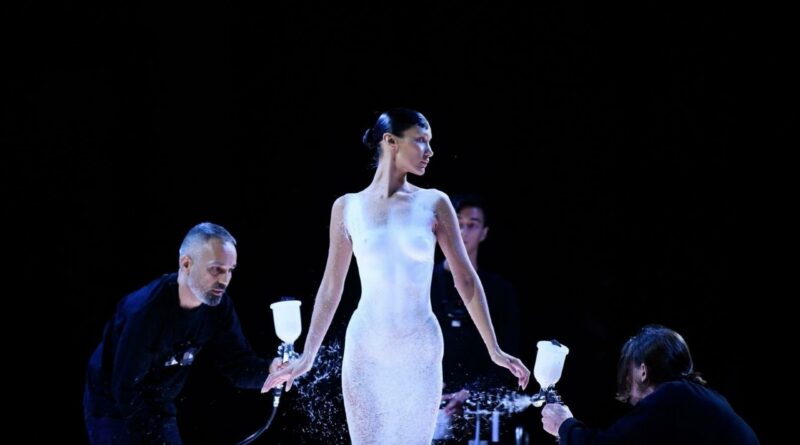 Bella Hadid walked the runway at the end of the Coperni Spring/Summer 2023 show in Paris Friday evening in nothing but nude underwear, before a group of scientists sprayed her with a liquid that instantly turned into a dress, made of jersey-like fabric.

The idea of spray-on technique was developed by Fabrican, a company founded by Spanish fashion designer and scientist Manel Torres. Fabrican liquid contains cotton or synthetic fibres, suspended in a polymer solution that evaporates when it makes contact with the body. After wearing, it can be removed and turned back into a solution, ready for reuse. Coperni co-founders Sébastien Meyer and Arnaud Vaillant have been working with Torres and his team at London’s Bioscience Innovation Centre over the past six months to develop the spray-on, one-shouldered dress.

“It’s our duty as designers to try new things and show a possible future,” says Meyer, who is also creative director (Vaillant is CEO). “We’re not going to make money on this, but it’s a beautiful moment — an experience that creates emotion.”

Sébastien Meyer and Arnaud Vaillant are the brains behind the ultra-modern Parisian label Coperni. For the brand’s spring/summer 2023 collection, the design duo – who tied the knot on a secluded Greek island last year – pushed the boundaries of fashion technology even further. “It’s our celebration of women’s silhouettes from centuries past,” Vaillant says in a preview over Zoom ahead of the show. “And we wanted to update our aesthetic in a more grown-up and scientific way, too,” adds Meyer, according to British Vogue.

RELATED: Gigi and Bella Hadid Rare Dual Appearance Has Been Spotted at US Open With Their Stylish Outfits

Held in the Salle des Textiles at the Musée des Arts et Métiers in Paris, the show presented a smorgasbord of notable sartorial moments. The designers were serious about playing with historical proportions, from exaggerated hips by way of padding on tailored wool trousers, to the excessive draping of fabric on miniskirts, as well as leather jackets that can be cleverly tied around the waist to resemble the 19th-century bustle. Additionally, there were separates with squared and bulbous shoulders that nod to the present. “The squareness actually came from the characters you see in the online game Roblox,” laughs Meyer.

The show was peppered with viral moments. Coperni also presented a solid gold version of its Swipe bag, worth €100,000; holographic floral garments and accessories; trousers and skirts with internal padding on the hips and bottom (mimicking the exaggerated silhouette of certain celebrities); and pieces covered in fragments of glass.

Coperni has captured the attention of young luxury consumers across the world, who are drawn to its sense of novelty and accessible luxury price point (bags retail up to €600, ready-to-wear up to around €1,100). The brand wouldn’t share exact figures but annual revenues reached “a few millions” from 2021 to 2022, says Vaillant. Sales have doubled every season from 2021 onwards, he adds. As the company continues to scale, the founders are balancing consumer demand and their personal thirst for (sometimes expensive) innovation with responsible growth — all against the backdrop of inflation and rising costs.

“In fashion you always need this dream and this pragmatism. We are creative but of course there are constraints,” says Vaillant. “When we launched Coperni, we really wanted to have fun. We knew we wanted to fulfill a passion and enjoy it. We are not saving lives!”

Meyer and Vaillant met 12 years ago as classmates at Mod’art International Paris. Partners in life and work, they married two years ago. They launched Coperni (then Coperni Femme) in 2013 but paused the label to become creative directors at Courrèges from 2015 to 2017. The duo then relaunched Coperni in 2018, with the backing of accelerator Tomorrow, which helped them with infrastructure, distribution and sales.

Coperni’s growth is down to the founders’ deep understanding of their young consumers, product innovation, and their creative chemistry as a duo, says Stefano Martinetto, CEO of fashion agency Tomorrow, which backs new brands including Coperni. “They were set up from the beginning with our support on distribution, sales, etcetera, which placed them in a strong position,” he says, noting that most emerging brands launch without this kind of infrastructure in place.

“Sébastien and Arnaud complement each other and work so well together, balancing the business and the creative side of Coperni as it grows,” Martinetto says. “They are like a modern day Valentino Garavani and Giancarlo Giammetti,” he jokes.

Coperni is beloved by legions of young fans on TikTok. The hashtag #Coperni has 73.6 million views on the platform. “I don’t feel like what Coperni does is trends,” says Leya Ijaz, a 22-year-old fan who recently shared a video of her new Coperni boots on TikTok. “When I say I want to be a Coperni girl, I mean it! I would wear everything that they have,” she says. “It aligns with how I like to dress, simple but stand out, sexy and feminine but with an edge.”

The finale saw a performance that centred around runway star Bella Hadid and Fabrican. Bella appeared on stage in nothing but nude underwear, while a team of specialists – led by Dr Manel Torres, managing director of Fabrican Ltd and inventor of the spray-on fabric – created the perfect minimalist Coperni slip dress directly onto her body. “We wanted to dedicate this moment to Dr Torres, because we respect what he does so much,” explains Vaillant. “We felt that it was absolutely necessary that he led the performance – to us, that makes the experience even more magical.”