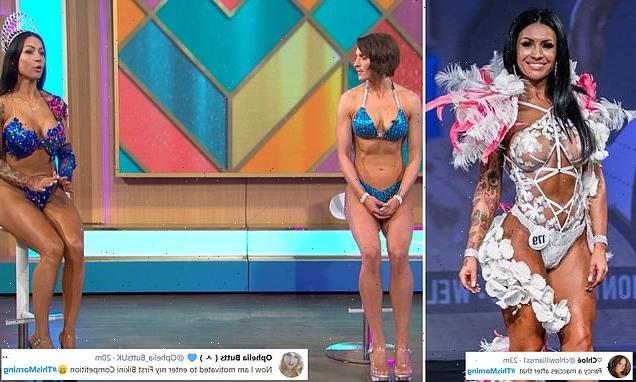 Bikini fitness champions reveal the reality of their strict training regime including 3,000 calories a day, ‘achievable’ weight lifting and bikinis that cost up to £1,000

Two bikini bodybuilding models stole the show on This Morning today, as they revealed the realities of their demanding hobby.

Dr Emily Wilkinson, who has a Phd in biopsychology, and Anca Ward, from London, two competitive bodybuilders, appeared on the show where they discussed the sport with Philip Schofield and Holly Willoughby.

Anca, who is 38 and is a grandmother, has been awarded the title of bikini fitness world champion five times.

The two athletes revealed they train relentlessy for their pageants, and that the sparkly bikinis they wear on stage during competitions could cost them up to £1,000. 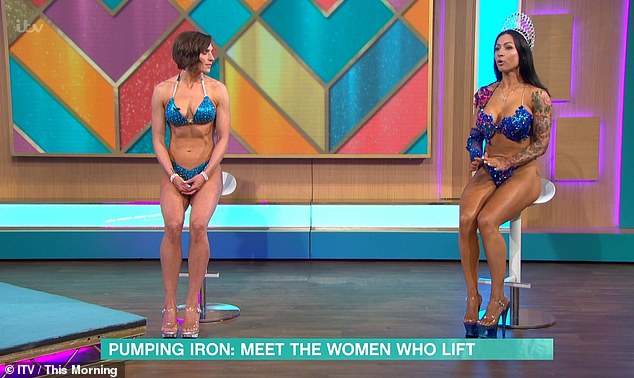 Dr Emily Wilkinson and Anca Ward, from London, two competitive bikini fitness competitors, appeared on the Morning show where they discussed the sport with Phillip Schofield and Holly Willoughby 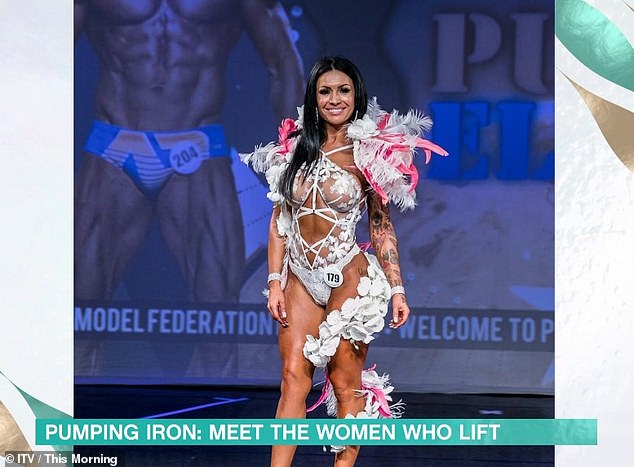 Anca, pictured during a competition, is five time bikini fitness world champion and admitted her bikinis could cost up to £1,000 or more

While some viewers said Anca and Dr Emily made them want to try their hand at bodybuilding, others said they wanted junk food

‘It’s basically just training hard, going to the gym, lifting weights, it’s very achievable for women, it’s about being the best you can be and showcasing yourself on stage,’ Dr Emily said.

The two women busted some myths about bodybuilding, including the fact people thought the women lifted weights on stage.

‘We don’t lift weights on stage, it’s all before,’ Anca said, before adding that while some male competitions had weightlifting, it was not the case for all bikini competitions.

Emily added that she stops training a week before her competitions. 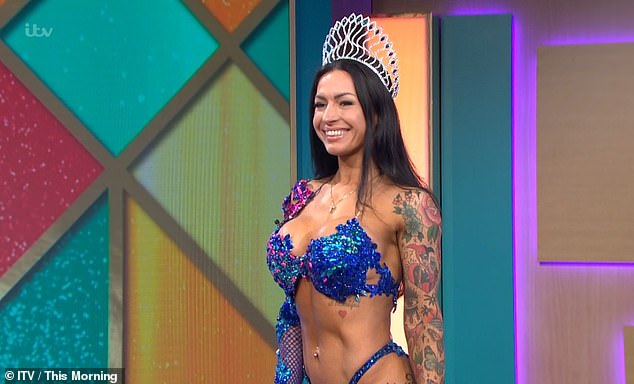 Anca, who is 38 and a grandmother, said she could count on the support of her family, and loved the sports 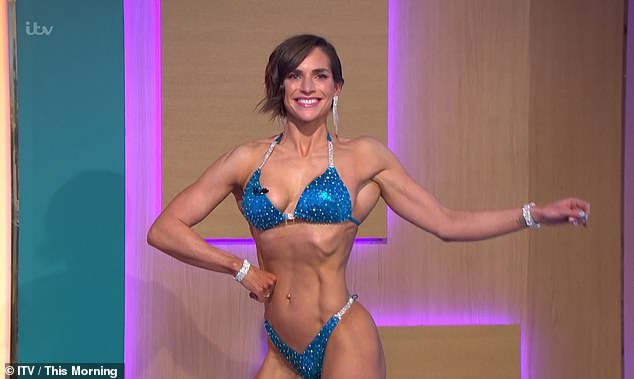 Dr Emily, pictured, said that fitness models have their weight monitored by professional coaches to make sure they’re not being unhealthy 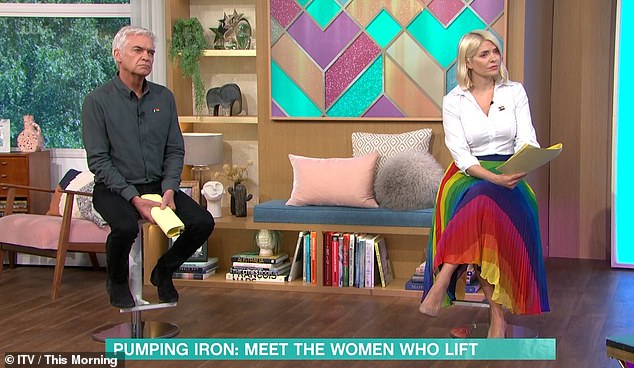 Phil and Holly, pictured, were impressed with the disciplined training regime Anca and Dr Emily follow

Dr Emily revealed that there is a big focus on nutrition when the models are prepping for their pageants.

‘You have to learn how to strength train, eat lots of protein, build your strength and once you’re at a certain point you can cut calories and introduce cardio which is when you lose fat,’ she said.

Anca added that while the training regime and diet are strict, they are always monitored by professional, and the models don’t starve themselves to achieve their lean physique.

‘I must say everyone think it’s an extreme sport. It is hard but we never go below 1,000 calories,’ she said.

‘I tell all my friends and clients who said “you must be eating nothing”. No, in fact I eat 3,000 calories a day,’ she added, while Dr Emily chimed in: ‘It does remain healthy.’

Dr Emily explained that while some bodybuilding competitions require women to reach 7 per cent body fat, it’s not the case for bikini competitions.

‘Within bikini, it’s not that low with body fat and it’s why it’s important to have a coach and a team to work with you,’ she said. 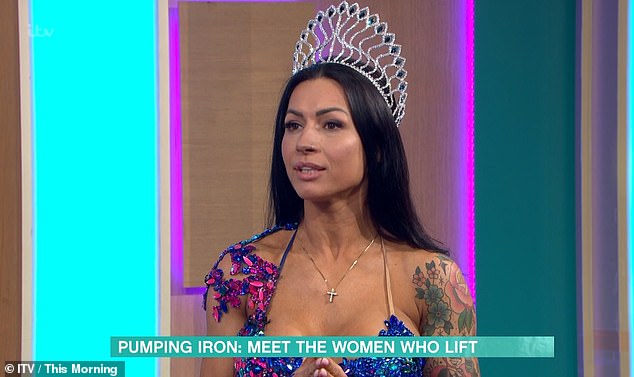 Anca, pictured, said she ate 3,000 calories a day, even if lots of her friend of her clients assumed she ate nothing 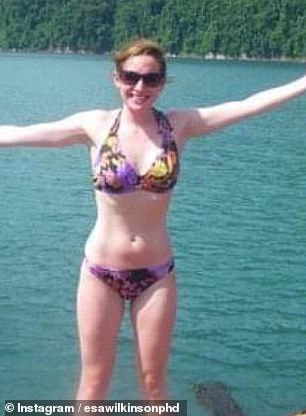 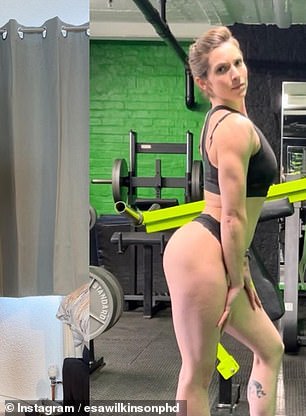 Pictured: Dr Emily before she started bodybuilding, left, compared to how she looks during training

‘As you start to drop, it’s done in a very controlled way,’ she added.

However, she admitted the weight loss could be ‘unsustainable,’ adding: ‘but only for a few weeks before the competitions and there’s an end goal.’

Anca, who is 38, revealed on the show she is a grandmother, and can count on the support of her family.

‘Without the support at home I wouldn’t be able to do it,’ she said. ‘I have a very good husband, he’s a PA and he supports me 100 per cent.

‘My other boy supports me and they understand,’ she added. ‘I’m just hoping that by  seeing me choosing the healthy life still, they do exactly the same thing with their life.’ 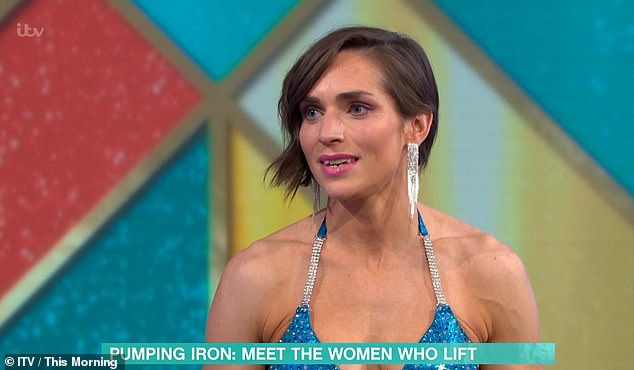 Dr Emily, pictured, said that bikini models could have more body fat than other bodybuilders – who sometimes have to drop to 7 per cent body fat 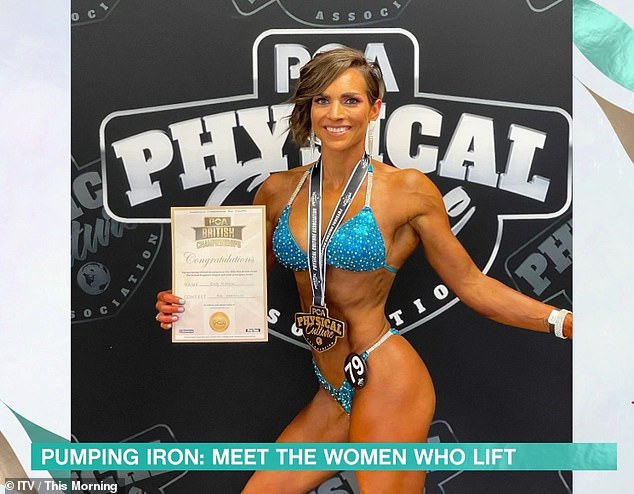 Pictured: Dr Emily after placing fourth in a bodybuilding competition at the PCA British Championships 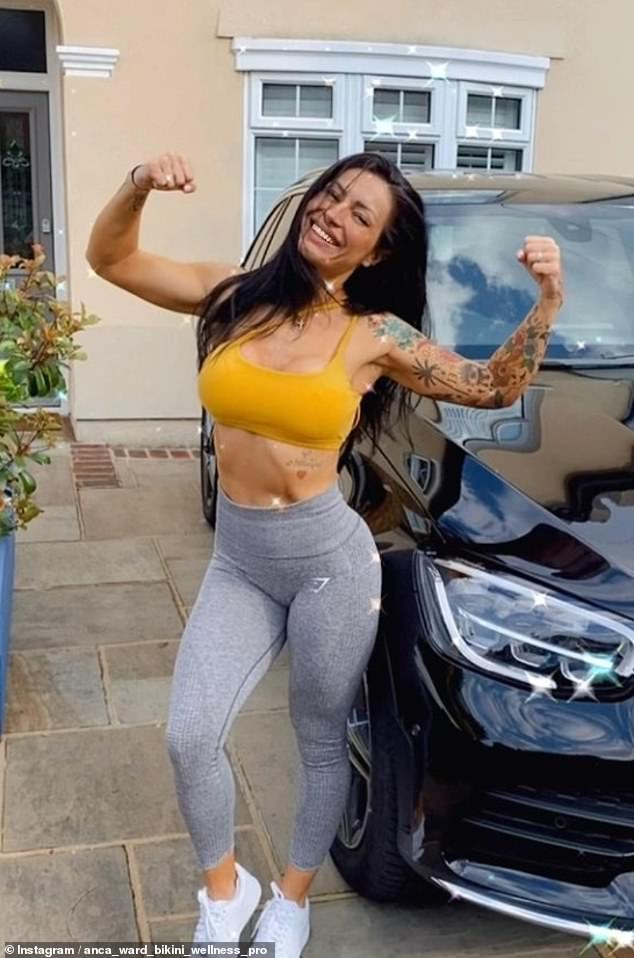 Anca, pictured, is a mother-of-two and a grandmother based in London who competes professionally 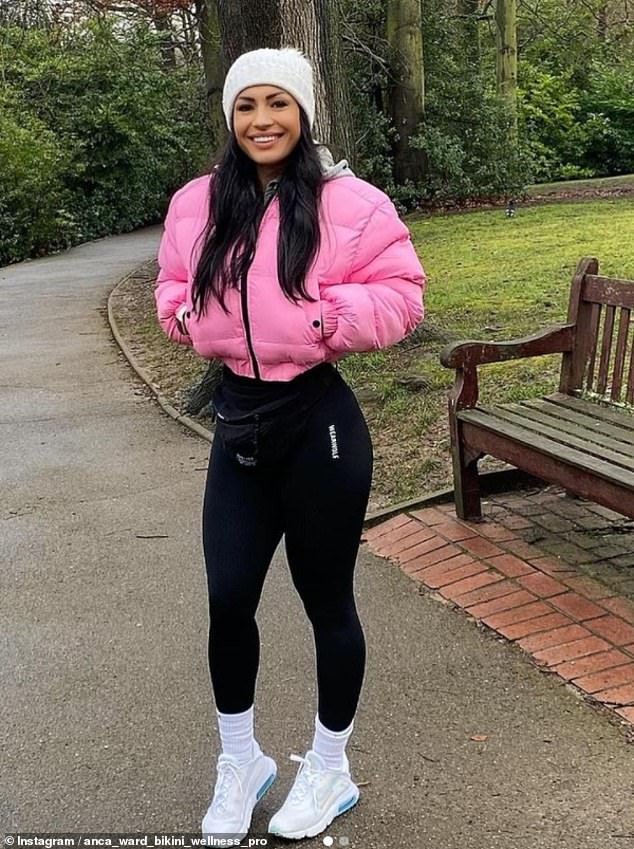 Anca has more than 27.100 followers on Instagram, where she shares videos of her training and fitness journey

‘Were all into sports, my older son is a black belt in karate, my younger son is a green belt,’ she added.

‘I’m so in love with the process, i just love, I get tired towards the end but I never moan, I love it 100 per cent. It depends what your end goal is,’ she said.

Anca admitted the beautiful and intricate bikinis she wears on stage could cost up to £1,000, adding ‘if not more.’

‘There are a few ladies in London, they specialise in it because as you can see, this industry grows and grows,’ she added.

Dr Emily said hers was provided by a stylist who worked with her sports federation, who were cheaper.

‘As the level increases the more sparkly and the more expensive it is,’ she said.

The two women responded to claims the sports encouraged an unhealthy, unattainable image for women.

‘I used to be a swimmer and when you’re a swimmer the first one that touch the end of the pool won. When you train as a bodybuilder, there is a bodybuilding competition, if you want to make it to be competition but that’s your choice,’ she said.

Anca agreed, adding anyone that was willing could get into bodybuilding.

‘If we can, everyone else can, you just have to find the time, the discipline, you got to be mentally happy, to want it 100 per cent, there’s no point us telling you what to do and how to lose weight,’ she added.

The incredible segment pricked the curiosity of some viewers, while others said hearing about Dr Emily and Anca’s fitness regime made them crave junk food.

‘Well after sitting there watching the bodybuilders…. it’s made me wanna eat more junk food,’ one said.

‘Not my cup of tea but seem like lovely ladies. Good luck to them,’ said another.

‘Imagine your Nan being a bodybuilder. Bench pressing your granddad when he’s late in from the pub,’ one joked about Anca.

‘Fancy a maccies after that,’ one said.

‘Now I am motivated to entre mt First Bikini Competition,’ said another.