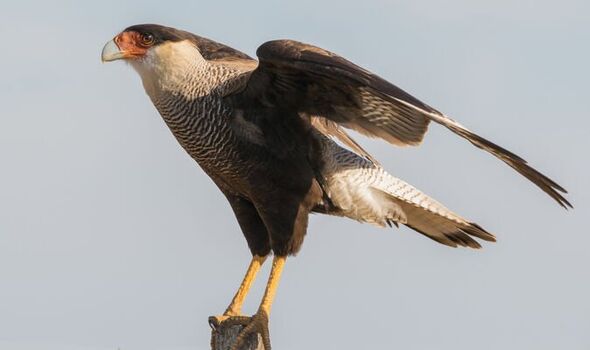 The bird, called Jester, made her escape during routine flight training on Tuesday, March 15 at the site near Regent’s Park. The crested caracara has used her newfound freedom to explore the sights as she has been spotted in South Ealing, west London, and Richmond, south-west London.

Dog walkers have been warned to keep an eye on their pets in case they bump into the variety of US falcon.

Now the elusive bird, which boasts a four-foot wingspan and enjoys quail and crickets for dinner, has been spotted in south London.

Staff have travelled nine miles south of the Thames to Streatham Common to try and retrieve the flyaway falcon so she can be reunited with her brother Joker.

Becky Horton, who lives nearby, was on her way home from a picnic with her husband and two children when she stumbled across the bird.

The 38-year-old took some photos of the bird and uploaded them to the social media app, Nextdoor, without realising it was the missing bird of prey.

Mrs Horton, who works as a general manager for the NHS, only realised the bird in the photos was Jester after someone commented “I’m sure I recently saw an article about an escaped bird from a zoo or something that looked similar”.

She explains that she would have taken more pictures of the bird, but didn’t want her two children aged three and eight months to get too close.

She said: “I knew that it was a bird of prey, but also that it wasn’t anything normal.

“We stopped to have a look at it, but we have two small children so I didn’t want to stick around.”

She explained that the bird was pretty sizeable, in comparison to her kids.

Mrs Horton said: “I have got a three-and-a-half-year-old toddler and it was probably about half the size of him.

“It was about three metres away from us so I took a few pictures and I would have taken more, but I wanted to get my children away.”

Staff from London Zoo were dispatched to the area in hopes of convincing Jester to return home.

They hoped to coax Jester into a travel crate using her favourite food quail and crickets but their attempt reaped no rewards.

While the crested caracara is not a danger to the public, dog walkers have been warned to be vigilant as the bird spends time on the ground looking for food.

“Zookeepers have since been attempting to coax her back home using food rewards and trained behaviours.

“We are not concerned about Jester’s welfare, as caracaras are well equipped for surviving in an urban environment; caracaras are small birds of prey and pose no danger to people or dogs – rather like a crow or magpie, they are primarily scavengers, eating carrion, insects and grubs or food in bins.”

Zoo staff warned the public not to feed Jester if they spot her as she needs a nutritional diet.

They added: “The team will continue to encourage Jester into her travel crate so they can bring her back home, where her brother, Joker is waiting for her – alongside a celebratory homecoming meal of her favourite quail and crickets.”