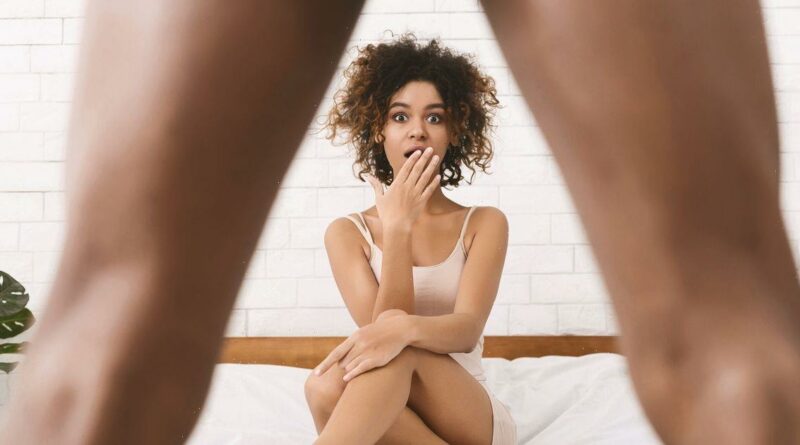 Trying to work out where to get your next, or even first tattoo? A word of warning if you're thinking of going a bit out there – steer clear of the genital area.

If you're still not convinced then allow us to introduce the story of the anonymous man who accidentally gave himself a permanent erection.

Of course, if you've put two and two together you've probably worked out this has something to do with tattooing his penis.

Sometime around 2012, a 21-year-old Iranian man decided it would be a good idea to get some permanent ink on his manhood.

He chose to get the words "borow be salaamat" (good luck with your journeys) and the letter "M" (his girlfriend's initial) tattooed on his chap.

That's all funny and sweet right?

Well, the result was neither of those things (for him anyway) as the man was left with what is known as nonischemic priapism.

In other words, it left him suffering from a half rigid penis due to blood being unable to exit the area. It is believed to be the first recorded case, according to the Journal of Sexual Medicine.

The journal also stated that after three months of living with the condition the man decided to seek medical assistance.

Following the tattoo, the penis was painful but there were no immediate erections. But his condition progressed "within a week" until it all started… springing up.

Doctors said: "For eight days after tattooing, the penis was painful, and thus there were no erections.

"After that, the patient noticed longer-than-usual sleep-related erections. This progressed, within a week, to a constantly half-rigid penis, day and night."

After initially lying to doctors that the tattoo had been created years ago he later admitted to getting the tattoo just before the condition started to occur.

It was also noted that the tattoo was drawn manually by a traditional tattooist using a handheld needle. Bleeding from deep penile tissue for several days complicated the tattooing – which sounds like a slight understatement.

After undergoing tests doctors were able to rule out etiologies of priapism – otherwise known as low and high flow of arterial flow, such conditions include sickle cell disease and thalassemia, and any hypercoagulable state.

Doctors were also left baffled when they found no history of alcohol or smoking in the man's history.

Finally, doctors were able to diagnose the 21-year-old with an arteriovenous fistula in the penis when the tattoo needle went in too far.

"In our case, most probably, the handheld needle penetrated the penis too deep, creating an arteriovenous fistula," wrote the doctors in the Journal of Sexual Medicine.

Where the man was located in Kermanshah, Iran there were very few experts in the specific field recommended to fix his issue.

So he instead chose to undergo a "nonindicated Sacher procedure" which involved having a shunt (a hollow tube surgically placed to help drain fluid) implanted to drain the excess blood.

In the Journal of Sexual Medicine, doctors noted this procedure was "unsuccessful".

It said: "Predictably, the procedure was unsuccessful because of the painless nature of erections, moderately good preservation of erectile function during intercourses, and disappointment with former surgery, the patient has declined to undergo further therapies, and lives with his condition."

The report concluded by stating: "Based on our unique case, we discourage penile tattooing."

Doctors also noted that the man declined "further therapies" and is now living with his condition.

The report states: "Because of the painless nature of erections, moderately good preservation of erectile function during intercourses, and disappointment with former surgery, the patient declined further therapies, and he lives with his condition."

For more of the latest lifestyle content from Daily Star, make sure you sign up to one of our newsletters here.