Sydney Symphony Orchestra chief conductor Simone Young has declared the Opera House concert hall one of the best in the world following its 2½-year, $150 million refurbishment.

Young spoke as she nears the end of her first, triumphant series of concerts in the new-look hall, which began with a performance of Gustav Mahler’s monumental Symphony No.2, The Resurrection. 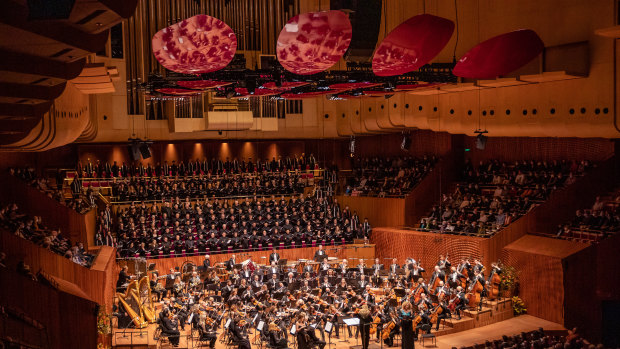 The concert hall and its acoustic “petals”.Credit:Daniel Boud

In his five-star review of the July 21 concert, Herald critic Peter McCallum heralded the new acoustics “a sound for the generations – for the next hundred years, climate allowing”.

The radically different sound revealed itself to Young the week prior, when she and the orchestra experimented with the new acoustic “petals” suspended above the stage.

“We were trying out various constellations and positioning of the orchestra under various heights of those wonderful petals, which we can move up and down to optimise the space for a particular work or size of orchestra,” she says. “And we were just blown away by the clarity and the beauty of the sound. It’s just marvellous. 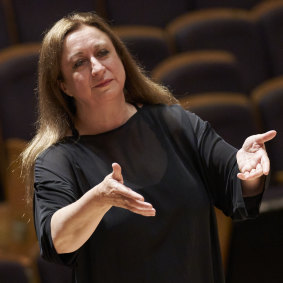 Simone Young: “We were just blown away by the clarity and the beauty of the sound.”Credit:Jay Patel

“I would play a passage through with the orchestra and then my assistant would continue to conduct it a few times while we tried different constellations and arrangements and slowly came to a set of what are, for us now, the sort of default settings that we will start in, but it’s not the work of a week, it’s the work of quite a few months.”

She found a lower setting for the petals worked best for smaller ensembles, while moving them higher for the massive sound of the Mahler “somehow optimised the overtones”.

Young was prepared for the huge interest in the reopening of the hall but has also been gratified by the continuing enthusiasm for this series of concerts, which has included visits from violinist Hilary Hahn and pianist Javier Perianes.

“It was to be expected that there would be a lot of excitement about the opening performances,” she says. “But the audience continues to be excited and galvanised by the whole experience, which is thrilling.”

Young says that beyond maximising the potential of the “new” concert hall, there will be three elements to her stewardship of the orchestra, which she has just started.

“I hope there will be a continuation of what we have been establishing in these first few weeks: a deeper study of some of the great classics, a broadening of that repertoire to works less often heard here in Sydney, and also a commitment to the development of new work.”

She is also committed to collaborating with other arts companies, as evidenced by upcoming performances of Mendelssohn’s A Midsummer Night’s Dream in a joint venture with Belvoir St Theatre.

“The opportunity to collaborate with Belvoir St just presented itself and so we grabbed it. It’ll be something perhaps a little bit new, something we haven’t tried before. So I think it should appeal to audiences of all ages. I think people will find it very amusing, very charming, very touching.”

Young returns to Sydney in November when, among other works, she will conduct Brahms’ First Symphony.