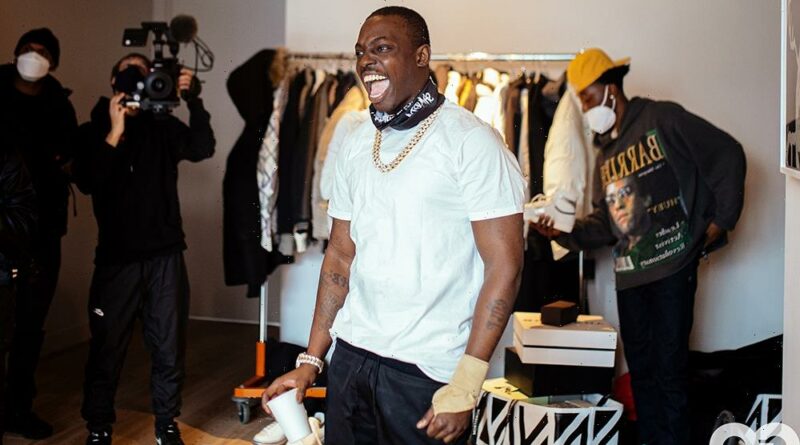 Brooklyn rapper Bobby Shmurda spent six years in prison but got back on his hip-hop grind literally as soon as he was released in February of last year — Quavo picked him up.

The rapper, whose real name is Ackquille Pollard, was sentenced to six years for conspiracy to commit murder and weapons possession in 2014, at the same time his viral single “Hot N—a” was blowing up. Six years is a long time, especially in the hip-hop world, but Shmurda managed to keep his career alive — he completed his deal with Epic Records — and went straight into the studio upon his release. Since then, he’s dropped the singles “No Time to Sleep,” “Shmoney” featuring Quavo and Rowdy Rebel, “They Don’t Know,” and most recently “Gettin’ Em Back” — and has a new EP and full-length album on tap.

Shmurda currently more than 5.7 million followers on Instagram and 2.73 million subscribers on YouTube, and his most recent challenge reminds folks that he’s going to be outside and acting up all summer long. Variety spoke with Bobby Shmurda in June at SliC Studios, former NBA player Baron Davis’ compound in Los Angeles.

How are you doing?

Can I complain? Look at all this: I got all these vape pens, got pounds, I never felt so alive in my life. Just being independent and everything that’s going on with my career, I feel like ahhh!

How does it feel to be an independent artist?

It feels good dropping [music] anytime I want to. I’m about to release an EP with a company. Still building the team out.

What music do you have coming?

We’re about to put this seven-song EP out, “Bad Boy,” leading up to the album. Only Rowdy [is featured] on the EP, then on the album, we got everybody. “Ready to Live” is the album, 14 or 15 songs. I got an artist I just signed, Shman Dog.

Is this the first time in your career you’ve been independent?

It’s the first time, yeah. I haven’t been independent since 2014, since I signed the [Epic] deal. I just got out of it three months ago. That shit feels good, just being free to be able to do whatever you want to do. Because I’m the type of guy, once I can’t do whatever I want to do, that’s not me. That’s where they take the you from you.

What were you like when you signed that deal in 2014?

Bobby was a on-the-run-from-the-police n—a. Bobby was a bad little motherfucker in 2014. Bobby had a whole bunch of shit going on, so he was trying to get out the ‘hood. When you’re young like that, they know you’re young and you’re coming from those types of [background], you’re not even thinking about music. You’re thinking about grabbing money to get your moms out the ‘hood, or you get out the ‘hood before somebody gets killed or you kill somebody type shit.

That’s such a contrast from your dancing energy. Have you always been like that?

That’s how I was getting the girls when I was younger. When you’re bad, you can’t just be bad. You gotta have some type of good, so I got a good smile. They think I’m funny and I got to dance for ‘em.

Were you dancing in jail?

Everywhere. I made killers dance. I make everybody dance with everybody.

What music were you playing back there?

Dua Lipa, that’s my favorite pop artist. I think every song she put out, “This shit fire, bro,” she’s one of my favorites. [Starts singing “One Kiss” by Lipa and Calvin Harris.] “One kiss is all it takes/ Fallin’ in love with me/ Possibilities.” [Snaps fingers to beat] Yo, she’s trying to make someone have a baby! Ya heard?

You said you were wilding in jail. What were some of the craziest moments?

I don’t know if it’s the riots or the sex on the visits. I got oral sex, didn’t get sex sex. I’m too big to be doing all that other shit, ya understand?

Did they see you with the oral sex?

I mean, sometimes. Some of them wouldn’t care, they’d be like [shrugs]. Some would be like [in deep voice], “Ackquille Pollard! Chill, hold it down, son! What the fuck you doing?! This girl right here, both of y’all get the fuck out!”

You went to the psych ward at age 16, right?

I was going to the doctor and evaluations from second grade until I was 16. ADHD, ADD. They tried to put me on pills but my mom’s West Indian, so they not with none of that shit. “He needs an ass whooping, sit him down.” After that, I started smoking weed — it’s crazy, it calmed me down. When I smoke weed, I’m like this. [Sits still.] If I don’t smoke weed. I’m like “AHHH!” Tasmanian [devil]. The last time I’ve been to the psych ward was 16 or 17. I tried to burn the place down because security didn’t want to let me out. I was in juvenile and they wouldn’t let me out. These were some big motherfuckers. Every time the needle came out, I shut the fuck up. “I’m sorry!”

What was worse: the psych ward or jail?

The psych ward. Jail, you smoke weed, get head on visits and shit, you good.

You smoked weed in jail?

I ain’t got nothing else to do!

Now that weed is legal in New York, talk about your new strands that are coming out.

My deal is with Elevate. I’m about to go to the factory on Monday. I just signed on 10 strands, they’ll be in stores soon. We got the big Guala J’s coming out. We got the big Jeffies. We got the Shmurda Pack. We got all types of shit.

Six years behind bars is a long time. Was there ever a moment you felt defeated or hopeless?

Hell yeah. Hell yeah. All the times when I was fighting police, that’s when I felt defeated. I didn’t feel defeated… well, defeated, yeah. Because when I fight police, I used to be on some “fuck everything” shit. When someone makes me errrr, I want to hurt somebody. Those days, yeah, I felt defeated.

In jail. Usually I’d laugh with them. People who come up to my hole, [if] they’d fuck with me, I’d be laughing at them. “Shut your miserable ass up, get out of here. You crazy.”

Moms is good. Pops, he’s fighting his appeal right now. His appeal is looking good, he’s going to court this month, actually. We’re just praying to hear some good news. He’s been down for 27 years, he’s been down since I was born.

Your dad got life?

Yeah, he got 120 years for some shit he ain’t do. But now he got the appeal back. I got in position to get some money, so I paid for the appeal. Got it poppin’, he’s in court right now. I’m on my fourth appeal. My brothers are in the system. My father’s in the system. They got life, they all got life. It’s something I deal with every day. I think the world is not aware of the system.

What’s the biggest lesson you learned behind bars?

Don’t take nothing for granted. You could be here one day and dead the next day. Anything you want to do, make sure you do it.