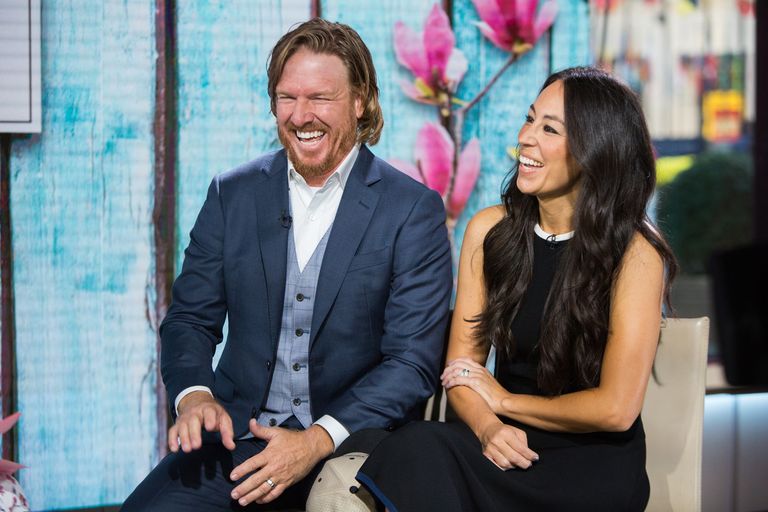 Chip and Joanna Gaines have welcomed fans into their home for years through their show, Fixer Upper, as well as their social media accounts. And in photos posted this weekend, they also welcomed us into the hospital room where their new baby boy was born.

Judging by the millions of interactions, it’s safe to say people were excited to meet the baby boy, Crew Gaines, as the couple named him. But no emotions could compare to the ones experienced by the parents and their four older children. In the comments, people couldn’t get over how beautiful and calm Joanna looked shortly after giving birth. It turns out, there’s a reason for that.

Our baby boy, Crew Gaines, is here and we couldn’t be more in love. He made an unexpected (and speedy) entrance into the world two and a half weeks early – which is fitting given he was a sweet surprise from day one. Thank you for all your thoughts and prayers. We are so grateful.

Our baby boy, Crew Gaines, is here and we couldn’t be more in love. He made an unexpected (and speedy) entrance into the world two and a half weeks early – which is fitting given he was a sweet surprise from day one. Thank you for all your thoughts and prayers. We are so grateful.

“That particular [expression] is wonder,” Susan Constantine, human behavioral expert and author of The Complete Idiot’s Guide to Reading Body Language, told CountryLiving.com. “When you’re having those moments where you realize a miracle has happened, and it’s a time of reflection.”

Susan, an avid watcher of the HGTV show herself, sees Joanna as “a very spiritual person with a quiet demeanor” and this moment as an “intimate connection with God.”

Joanna is similarly serene in the next photo, as is her husband Chip. “When something is so overwhelming, it’s what we call ‘flooding’ of emotion,” Constantine continues. “You don’t always have to show great smiles and laughing. It’s that deep look into the eyes like there’s no words to express the emotions they feel—a very deep, passionate moment between the two of them.”

“See how his shoulders are hunched over and round and those bones are sticking out?” she says. “He really wants to hug her but he wants to be careful at the same time.”

This is a sweet, tender departure from the playful demeanor we usually see from Chip, Wood, also a self-confessed fan, adds.

Constantine calls the next photo, in which Joanna holds Crew close, the picture of endearment, and Wood adds that it’s clearly not posed. Joanna’s sweet, soft smile says she is in the moment with her baby.

“If you look at her bottom hand, how it’s fully surrounding Crew and cupping over the edge so that it’s protective and wanting to bring back into her belly,” Wood explains, “and then the top hand is very relaxed so that she knows she doesn’t want to be too overwhelming for the baby.”

Both pros point out how natural and connected the kids are with their parents in the next pictures (not to mention consistently on the TV series). While each of the children has a look of “deep joy and excitement,” Constantine says the oldest, Drake’s pursed lips and hands in his pockets mean he might be “more reserved and introverted” than Duke, Ella, and Emmie, and “just trying to play it cool.”

“Chip’s looking right at him like, ‘Dude, do you see what we just did here?'” Constantine laughs, “and he’s kind of speechless.”

Like father, like son! The way Chip is mirroring Drake, with his fingers in his pocket and his elbow pulled back, shows that the two have a connection and that “Chip’s trying to be cool guy and restrained,” Wood says. “He’s trying not to be too over-the-top about how excited he is.”

One of my favorite pics a friend showed me after Crew was born. They couldn't wait to meet their new baby brother ❤️

One of my favorite pics a friend showed me after Crew was born. They couldn’t wait to meet their new baby brother ❤️

In the snapshot of the big brothers- and sisters-to-be waiting outside the hospital room, there’s a sense of anticipation. Once again, the Gaines family is perfectly in sync, mirroring one another’s body language.

“It’s interesting when you look at Drake, the oldest, he’s in a position where even though he’s listening, when I look at that I think of gratefulness, kind of like a Tim Tebow moment going on there where you’re almost in prayer,” Constantine says.

Chip and Joanna have previously worked with the Tim Tebow Foundation, so it’s possible Drake does look to the athlete as a role model.

And finally, the sweet selfie Joanna shared with baby Crew conveys nesting behavior typical of newborns. “Look at the baby’s arm kind of wrapped around Joanna’s arm,” Constantine notices. “It’s just kind of a natural instinct to pull himself up around his mom as a form of covering and protection.”

Most telling is how comfortable Joanna is with her new little one, both pros point out.

“She’s been here so many times before, she’s relaxed, she knows the baby is secure there, she doesn’t feel the need to hold on tight,” Wood says. “It tells me she’s a knowledgeable mother, very secure in her nurturing abilities. And you’ll see that too in how relaxed her facial expression is, how beatific—it’s very Mona Lisa-like.”

Once again, her lack of smile here does not mean a lack of emotion. “It’s not that she’s not happy,” Constantine concludes. “She’s very happy. But Joanna in all of these photographs is a person that is constantly reflecting on the awe and wonder of this child being born. She looks at her children as miracles. You can just see the amazing amount of glory and peace that comes over her face when you see her with her newborn kids.”

From: Country Living US