Prime Minister Scott Morrison wants leading health officials to agree on a national coronavirus hotspot definition as a top priority so he can use the medical advice to pressure premiers to open their borders.

The Prime Minister intervened on Thursday on behalf of a 26-year-old woman who flew to Queensland too late to say goodbye to her dying father and was then locked in hotel quarantine on the day of his funeral.

The Australian Health Protection Principal Committee is having rolling discussions about how to define hotspots, with meetings almost every day. Every state except Western Australia has agreed in principle to use clearly defined hotspots to allow safe travel between jurisdictions. 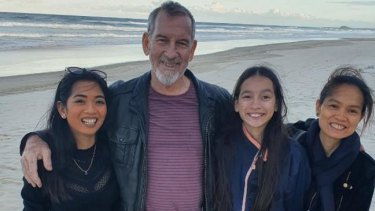 Government sources said Mr Morrison did not want to pursue the potential for biosecurity powers to be used to force borders open, instead putting a top priority on using medical advice to pressure premiers.

Mr Morrison phoned a radio station after privately pleading with Queensland Premier Annastacia Palaszczuk to let Sarah Caisip join her mother and 11-year-old sister and other mourners. But while she was allowed out of quarantine to visit her father's body alone, she was not given an exemption to attend the funeral.

There have been no coronavirus cases detected in the ACT for 62 days. But Queensland Chief Health Officer Jeannette Young said the nation's capital was a "hotspot" because Canberrans had holiday homes on the NSW South Coast, where there was a cluster of cases in July.

Dr Young said funerals were "very, very risky" environments for spreading the virus. "The last thing I would want to happen is to have an outbreak at a funeral," she said.

Mr Morrison phoned Ms Palaszczuk to ask her to intervene in the situation and also spoke with Ms Caisip on Thursday morning.

A frustrated Premier accused the Prime Minister's office of ordering a "co-ordinated attack" with the state opposition against her government. "I will not be bullied, nor will I be intimidated by the Prime Minister of this country," she said in Parliament.

That prompted Mr Morrison to phone radio station 4BC to ask for compassion.

"It was Father's Day on the weekend. And I'm just thinking of Sarah, she had to go through that day in a hotel in isolation and there she is today," he said. "This isn't about the Premier of Queensland and me or anyone else. Surely, in the midst of all of this heartache in COVID and everything that everyone's going through, surely just this once this can be done."

A spokesman for Mr McGowan said the hotspot model for travel restrictions was not as effective as the hard border and the state wouldn't set any "arbitrary deadline" to reopen.

"At this stage, the hard border will stand until the health advice says otherwise," he said. "A date will be set, when our health advice recommends it, but that might be some time away."

Victorian Premier Daniel Andrews and Ms Palaszczuk resisted the federal definition of a hotspot but signed up with all but WA to negotiate over the proposal.

There are no active virus cases in South Australia, Tasmania, the ACT or Northern Territory while WA has only three cases, all in hotel quarantine. SA, which did have its borders closed, has now opened them to people from Tasmania, Queensland, WA and the NT. Others have to quarantine.

Tasmania is working towards opening its borders to virus-free states by December 1, with a weekly review of health advice to see whether that could happen earlier.

"We will continue to make decisions regarding our own borders and our view of the risks that other jurisdictions present and we won't be ceding our responsibility in terms of our borders to the commonwealth," Tasmanian Premier Peter Gutwein said.