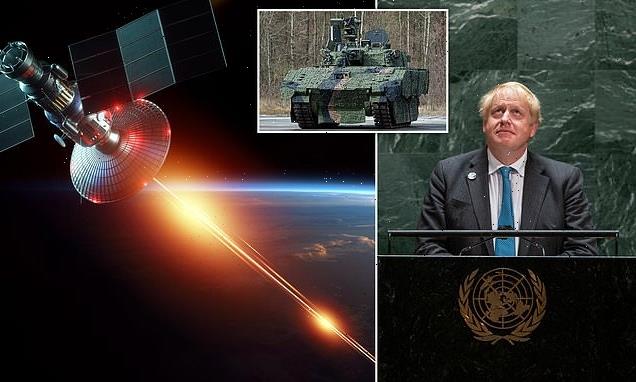 More thrilling news from space this week. As I write, a British-built spacecraft is about to start sending back pictures from Mercury, the closest planet to our Sun.

An impressive achievement but hard to see any immediate benefit to us.

Unlike the other big space news this week: the Government has announced that we now have a National Space Strategy.

For the first time, our civil and defence interests in space are being brought together.

The Government has recognised, in the words of Defence Secretary Ben Wallace, that space is now ‘fundamental to the success of our Armed Forces’.

Indeed, he went further. It is also fundamental to our ‘civilian, commercial and economic activity’.

In other words, everything we do.

Boris Johnson, never short of a boosterish boast, wants us to be a ‘scientific superpower’.

You can see the logic. Without all those satellites competing with the stars in the night sky — almost 7,000 and counting — life as we’ve come to know it would simply be impossible.

And it’s more than just satnavs replacing maps or the ludicrous Alexa telling us how to run our lives. Our defence system would be more vulnerable than a rabbit in a lion’s cage.

Forget about tanks on the enemy’s borders. The new frontier of defence is in space. 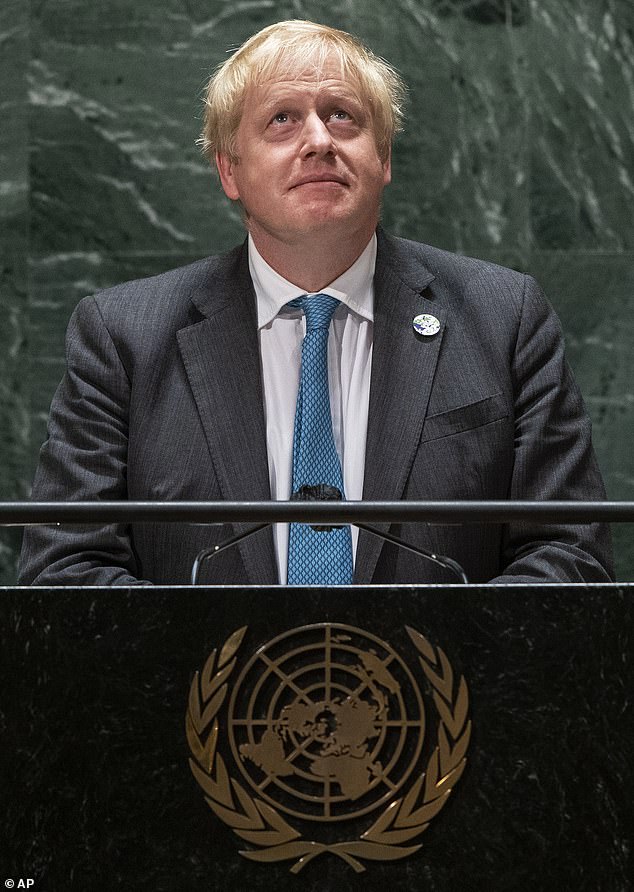 John Humphrys: Boris Johnson (pictured), never short of a boosterish boast, wants us to be a ‘scientific superpower’

The Cold War ended nearly 30 years ago. The cyberwar is in its infancy. And the enemy has changed, too.

President Putin is more concerned with rigging elections to stay in power and adding a few more stolen billions to his vast fortune than he is with Russia running the world.

The new threat is China. And it’s a very different threat from the one posed by nuclear missiles aimed at London or tanks crossing borders in Eastern Europe.

Not that China has held back from invading countries it regards as its own territory. Ask the people of Tibet.

Or the citizens of Taiwan, who watch the increasing level of Chinese military, political and economic pressure with growing fear.

But China has no interest in attacking the West. Nor does it fear an attack from the West.

In this new conflict, victory will not come from the barrel of a gun. It will come from influence. And influence is power.

China wants a free hand to use non-military means to expand its influence wherever it chooses in the world.

That will ensure its own survival and growing prosperity and enable it to spread its anti-democratic message.

That’s why the Government is right to say our ability to compete in space is fundamental — it will protect us from being vulnerable to hideous blackmail.

The nuclear threat has been managed with that dreadful acronym MAD: mutually assured destruction. Cyberwarfare is the next threat.

Try picturing a nation without electricity because its digital network has been crippled. Unimaginable.

So now let’s come down to earth.

We can confidently assume that Boris Johnson will make his usual overblown promises at the Tory party conference starting tomorrow. 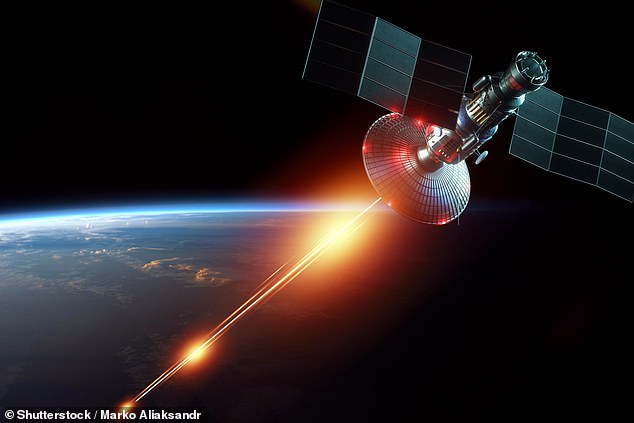 John Humphrys: You can see the logic. Without all those satellites competing with the stars in the night sky — almost 7,000 and counting — life as we’ve come to know it would simply be impossible (file photo)

But surely this nation is more than capable of resisting any blackmail threats from the Chinese? Don’t we have some of the finest scientists and engineers in the world?

Of course we do.

Don’t we have some great factories more than capable of exploiting the latest technology and delivering the goods?

Of course we do.

What we lack is competence at the highest levels in the defence department.

Year after year, the National Audit Office and the Public Accounts Committee have published report after report lacerating the department for failing to get a grip on procurement — and wasting endless billions of taxpayers’ money in the process.

The most recent competitor in this hotly contested field of the worst procurement failures in the department’s history is the new Ajax light tank (cost: £3.5 billion).

It is such a disaster that soldiers have not even been able to test it properly to see how it works.

Or if it works at all. Last month the defence ministry was forced to admit that 310 soldiers who’d tried it out had to get medical help for hearing loss, back spasms and joint pains.

And even if they could drive it safely it would be next to useless. Tanks have to fire at things while they are racing along, right? Not the Ajax. It has trouble firing even at very slow speeds.

Oh, and it can’t reverse over obstacles more than 20cm high. So at least it will confuse the enemy, even if it can’t actually attack them.

But the grotesque waste of money spent on the Ajax is modest compared with the vast sums spent on our two new aircraft carriers, one of which has yet to be deployed (cost: £6 billion).

Perhaps if we had actually needed aircraft carriers it might have been money well spent. Or if we’d had the planes to fly from them. Or if they’d been able to protect themselves from enemy attack.

But none of those ‘perhaps’ conditions applied.

No serious defence analysts thought we needed them — even if we’d had the planes to fly from them.

We had to spend another fortune buying F35s from the States. But they themselves turned out to be a flop. In the words of the most senior U.S. Air Force officer, they ‘failed to achieve their goals’.

And if, God forbid, we were ever to send the Queen Elizabeth carrier into action against the Chinese, they’d be able to sink it with a missile long before the useless F35s had managed to take off. 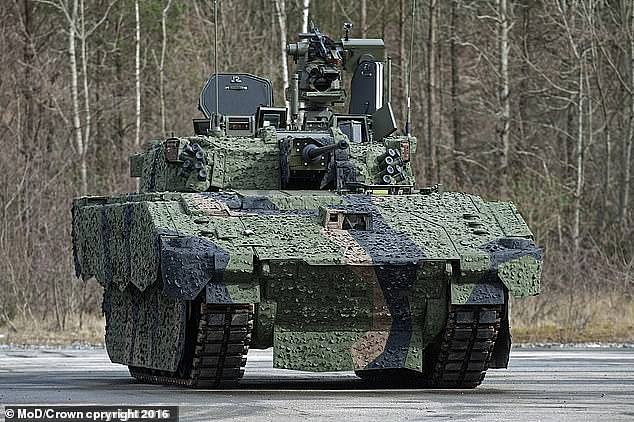 John Humphrys: One of the worst procurement failures in the department’s history is the new Ajax light tank (cost: £3.5 billion). It is such a disaster that soldiers have not even been able to test it properly to see how it works (Pictured: Ajax tank)

If the phrase ‘couldn’t run a whelk stall’ comes to your mind, you are not alone.

Maybe what this shameful catalogue of procurement failures tells us is that we shouldn’t bother.

According to our Nato allies across the channel, we are merely a ‘fifth wheel’ when it comes to the defence of the democratic West.

There are already nearly 3,500 active satellites up there and the U.S. has nearly 2,000 of them. We have seven. Until three years ago we didn’t have a single spy satellite.

That might deprive Boris Johnson of his ‘scientific superpower’ boast, but it would save the nation an awful lot of money.

And it’s not as if we don’t have plenty of things to spend it on.

Half a million? Well that IS a high roller…

Readers of a certain age may (just) remember the poster. It showed a Tommy in full battle kit in 1940, one hand holding his rifle, the other raised in a ‘stop’ sign.

The caption: ‘Is your journey really necessary?’

We could have used a few of those posters outside our petrol stations this past week.

We’re not at war but it’s starting to feel like it. Then again, maybe we are at war.

That’s what the well-meaning idiots who are trying to stop us going places would argue. A war to save the planet. Or at least make a contribution.

And now yet another outfit has piled in with its own contribution — and you’ll definitely remember them.

They’re called Rolls-Royce and they have unveiled plans to launch their first electric car. It’s named the Spectre (shades of James Bond — how timely).

The company’s chief executive says it is the ‘most significant’ announcement since Mr Rolls met Mr Royce in a Manchester hotel almost 120 years ago and they decided to make a car.

Mr Rolls had already given some thought as to whether it should be electric. He’d seen one in America. But the two decided it would not be ‘very serviceable — at least for many years to come’. Well now, it seems, it is very serviceable.

Indeed, it’s already trundling around our roads, heavily disguised of course, before its launch. Though maybe ‘trundling’ is a shade disrespectful. They say it’s so quiet you can hear its clock tick.

A small price to pay to save the planet. Then again, we could simply stay at home more. Perhaps the journey really isn’t necessary.