On the upcoming season of Botched, the docs will perform corrective surgery on Kim D, who has appeared on multiple seasons of The Real Housewives of New Jersey. 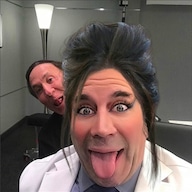 Botched fans know this certainly isn’t the first time Terry has teased Paul about his body hair. But he says this season he may take things to a new level.

“There may be an unfortunate waxing/shaving scene between us this season,” Terry teased. “Do not be eating while watching this scene.” LOL!