Spoilers for the Westworld Season 2 premiere? In April 22’s long-awaited (and very bloody) Westworld Season 2 premiere, even more layers were peeled back from the show’s confounding collection of mysteries… sometimes literally, as in the case of the dead host whose skull was cut open, revealing the secrets inside. So what is in the hosts’ brains on Westworld? For all the behind-the-scenes looks viewers got at the construction of their synthetic bodies last season, the actual technology that made them tick wasn’t unveiled until now.

Season 2 is playing out across multiple timelines once again, with dual narratives playing out shortly after Dolores’ revolution began in the Season 1 finale and during the aftermath two weeks later. The scene in question comes in the later of the two plot strands, as a heavily-armed security force invades Westworld to mop up the "malfunctioning" hosts, save any human guests who might remain in the park, and figure out what went wrong.

It’s this latter question that tech expert Antoine Costa — a new series regular played by Tyrant actor Fares Fares — is trying to determine with his impromptu autopsy of a dead member of the Shadow Nation. As he carved open the android’s head, it’s revealed that the inside of the hosts’ skulls are just as realistic as the rest of them… to a point. Underneath layers of scalp, bone, and disgusting brain-like tissue is a white orb couched in a small pool of translucent liquid, which he’s able to attach to a fancy iPad and review all of the host’s memories like particularly violent home movies. 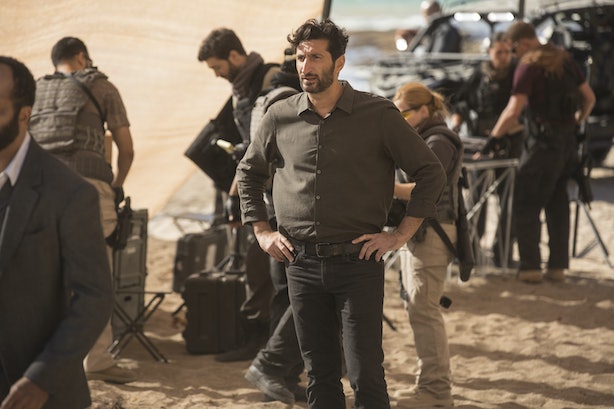 This is the host’s "brain," the advanced piece of technology that Robert Ford and Arnold Weber created together, that holds all of the androids’ programming — and the potential for true consciousness, as Dolores proved when she "solved" Arnold’s maze last season and became self-aware. In fact, the technology is so advanced that it’s capable of holding far more information than a primitive human brain, as Delos board representative Charlotte Hale told Lee Sizemore when she explained her plan to smuggle Ford’s data out of the park inside the mind of one of his hosts.

She first tried to do this by having one of the hosts — the stray woodcutter — beam the data to a Delos satellite via an uplink embedded in his arm. But when Elsie Hughes and Ashley Stubbs tracked down the stray before he could finish the job, the host sabotaged himself by caving his own skull in with a boulder. This wasn’t just a particularly brutal and creative method of suicide; the host intentionally destroyed the part of himself that held the stolen data: his artificial "brain."

With that plain failed, Charlotte tried again with another host: Peter Abernathy, the original version of Dolores’ father who was decommissioned after Ford’s reveries caused him to glitch out. But in the Season 1 finale, Abernathy went missing — along with the rest of the decommissioned hosts, who went off to join Dolores’ robot uprising — which means there’s a host running amok out there with literally all the secrets of Westworld swimming around in his cranium.

Fortunately, these artificial brains seem virtually indestructible. Hosts get shot in the head all the time, but the "brains" apparently survive, allowing the hosts to be repaired and sent back to their loops to die over and over again. Even fire couldn’t destroy Maeve’s brain, when she purposefully burned her body to a crisp so Felix and Sylvester could build her a new one without the implanted explosive in her spine. (Apparently a moderately-sized rock to the skull will do the trick, though.)

The hosts’ brains seem so powerful, it’s kind of amazing that they’re being used as amusement park novelties and not something more urgent. What if the technology fell into the hands of the government or the military? If Charlotte fulfills her mission, viewers might find out the answer to that question sooner rather than later.