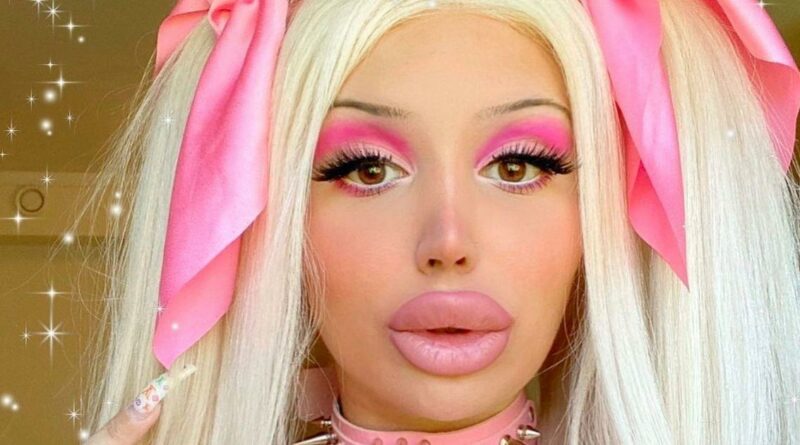 A woman who calls herself a "living Bratz doll" has revealed what she looked like before spending thousands of pounds on plastic surgery.

Stefanie Mulic, 21, from Sweden spends £14,000 each year on surgery after having her first lip fillers at the age of 13.

By 17, the Swede felt ready to try different procedures and had more lip fillers which made her feel the "best she had ever done".

Stefanie said having big lips helps her achieve the perfect doll look, with her inspiration coming from Bratz and Barbie.

Since then, she has had her lips, chin, cheeks, brows and jawline altered, as well as her smile lines and teeth done.

She has also had a breast augmentation and plans on having other surgeries in the future, such as rib removal surgery, a facelift, butt implants, hip implants, buccal fat removal and silicone lip implants.

Stefanie recently wrote on Instagram: "My goal in life is to be the most extreme version of myself and only myself.”

While some may think she has plans on stopping the plastic surgery soon, this isn’t the case

It looks like she has no plan to slow down the plastic surgery any time soon.

While she doesn’t post online as frequently anymore, she previously revealed what her goal was for 2021.

“Whats your goals in 2021? Mine is get a drivers license, bigger lips and change my appearance a lot! [sic],” she wrote online.

She added: “My face cost more than a big Birkin bag.”

While some may think she’s joking, this isn’t the case, as the starting cost of a Birkin is £9,076.

The 21-year-old has been immersed in the beauty world her entire life, with both her mum and auntie both working as beauticians.

Stefanie even went to beauty school in 2020, saying that she did this so she could inject herself.

She previously opened up about her motivation to get so much work done.

"I live in a small city in Sweden and have always loved beauty. My mum worked as a beautician all my life and my aunt works with fillers and Botox, so the subject was never foreign to me,” she said.

"I had always been insecure about my nose but I was dating a guy who once said, 'you're very good looking but your nose ruins it all'. I was so sad and then I knew I wanted a rhinoplasty.

"I have had a lot done since then, including my lips, chin, cheeks, smile lines, rhinoplasty, a brow lift, my teeth whitened, jawline and Botox."

She continued: "Before surgery, I didn't really like myself at all, after having surgery I feel so much better about myself, however, it still feels like there's more to do!

"I don't know how many times I've had my lips done because it's too many times to count, but it's been every month since I was 17.

"The inspiration for my look comes from Bratz dolls as well as Barbie and Playboy playmates."

Stefanie says that her life has become a lot easier since she began enhancing her looks – and she has no intention of stopping anytime soon.