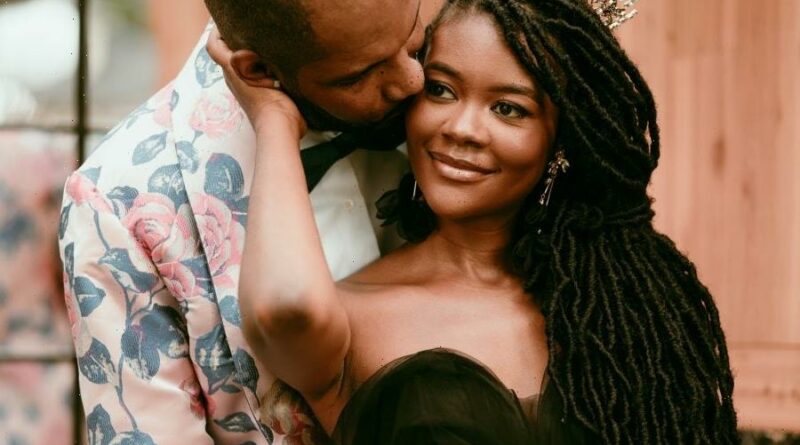 When Damon first laid eyes on Laurie while driving his car down the street one evening, he was so taken with her beauty that he made a u-turn so he wouldn’t miss the chance to connect with her.

The year was 2008, the place was Chicago, and the beauty was fashion designer and future Project Runway contestant (Season 14) Laurie Underwood. She was flagging down a cab when wine entrepreneur Damon Russell rode past. Next thing she knew, he was introducing himself.

“When I first saw Damon after he turned his car around, the energy I sensed felt life-changing and sure enough, it was,” she tells ESSENCE. “Love will always find you in the right place and at the right time.”

The two had their first date the next evening, and as Laurie says, “the rest is history.” They went on to fall in love, building a family together with Damon’s son Daemond and their daughters, Journe and Makemba. In 2016, Damon proposed during a ride on a Venetian gondola while the couple was on a trip to Rhode Island.

As beautiful as the progression of those years were, planning the wedding would come with great stress and even bigger roadblocks. The couple was initially set to wed in Florida, but when the pandemic hit in 2020, they had to postpone their nuptials and go back to the drawing board. Despite the planning struggles, their situation gave them the chance to get creative and think outside the box when it came to how to say “I do.” They decided to get married in a place already with filled with a lot of love: at home, in their backyard.

“We decided to plan and design our own wedding,” Laurie says of the August 14th nuptials. “Damon designed a waterfall that was displayed as the focal point during the ceremony, a floating deck to elevate us as the bride and groom, and a lounging pergola, used during the reception.”

Displaying further ingenuity, Laurie, the brains behind bridal line Laury Bride, crafted her own wedding gown. She opted for it to be in black. Every unique touch, from the big things, like marrying at home, to the little, like the bride and groom wearing unconventional attire while guests wore white, contributed to the wedding of Laurie and Damon’s dreams.

“Damon and I have been together for a long time, so traditions got thrown out the door for us and we were grateful to have the wedding that we would be happy with; from the style, to the venue, to the family-style vegan dinner, to the look and vibe of an affair we planned together in our home,” she says.

Check out the gorgeous images from their intimate, at-home wedding on the Southside of Chicago, learn more about how the day came together, and hear more about their overall love story.

Want your wedding to be considered for feature in Bridal Bliss? Email us a few wedding photos and the story of your big day, with a few quotes, at [email protected]