When an opera ends in a teenager doing a striptease for her stepfather and kissing the severed head of a holy man, a scandalous reception can hardly come as a surprise. Strauss’s opera, based on Oscar Wilde’s version of the biblical story of Salome, has been entertaining and disgusting audiences since its 1905 premiere. Despite extraordinary demands on the cast and orchestra, Victorian Opera’s vocal and musical presentation of Salome is world-class. The production, however, is not.

The plot follows Salome, who is infatuated with John the Baptist (Jochanaan), a prisoner of her stepfather, King Herod of Judea. Herod lusts after Salome, saying he’ll give her anything she wants if she’ll dance for him. Cue the famous Dance of the Seven Veils, which Salome completes and demands Jochanaan’s head on a silver platter. What unfolds is dazzling and disturbing. 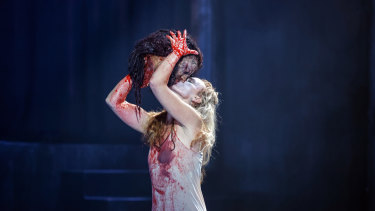 Victorian Opera’s Salome, Vida Miknevičiūtė, gets up close and personal with John the Baptist.Credit:Craig Fuller

The title role is difficult to cast, requiring a Turandot-sized voice but a singer able to portray a manic, sexually charged, bloodthirsty 13-year-old. Vida Mikneviciute’s incredibly focused soprano slices through the mammoth orchestra like a hot knife through butter. The Lithuanian, on stage for almost the entire 90 minutes, displays a vocal stamina that is astonishing.

With its cavernous auditorium, The Palais is the closest thing Victoria has to a grand European opera house. The acoustic is no challenge for Australian bass-baritone Daniel Sumegi or English tenor Ian Storey, who give thrilling vocal turns as Jochanaan and Herod respectively.

A production where the audience must read the director’s note in the program in order to “get it” is problematic. Herod’s palace is a rundown theatre and the ruling class is dressed as sad, sparkly clowns in outrageous wigs. This realisation did not enhance Strauss's or Wilde’s already vivid, stimulating storytelling.

But the score is king, and despite the challenges of the Palais pit, Orchestra Victoria delivered Strauss’s slinky chromaticism and colossal colour with style under the baton of Richard Mills.