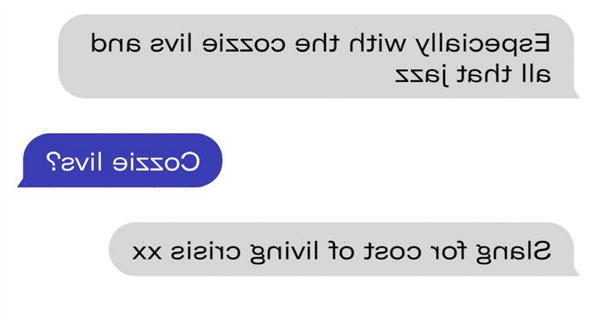 If there's one thing that Brits love, it's a slang word.

Last year was rife with them – with Platty Jubes (the Platinum Jubilee) being most people's favourite.

However, there is a new one in town, and it's leaving people divided over whether it's genius or awful – cozzie livs.

READ MORE: From 'Sliving' to 'flawsome' – see if you know slang words coined by celebs

If you haven't worked it out yet, the phrase is a slang term for the cost of living crisis, because obviously writing that is way too long.

It seems the phrase may have got coined by someone on buying and selling app Depop.

A message between two of its members was shared on popular Twitter account Depop Drama and has since gone viral.

One girl was seen saying: "I can't go that low babe, especially with the cozzie livs and all that jazz."

The other girl asked: "Cozzie livs," as the seller replied: "Slang for cost of living crisis xx."

The post has so far racked up more than 63,000 likes and hundreds of comments.

It seems the phrase has been catching on as many people on Twitter have noticed its use now.

One wrote: "Heard a girl on the bus in Clapham call the cost of living crisis the Cozzie Livs :(."

As another added: "Just seen someone use ‘cozzie livs’ instead of ‘cost of living’ and kinda love it."

A third chimed in: "POV: you called the cost of living crisis 'Cozzie Livs' and I'm coming to get you."

While a fourth chimed in: "I just saw someone refer to the cost of living crisis as the ‘cozzie livs’ and I feel a bit sick."

Whether it'll die out or it's here to stay, we'll just have to wait and see…