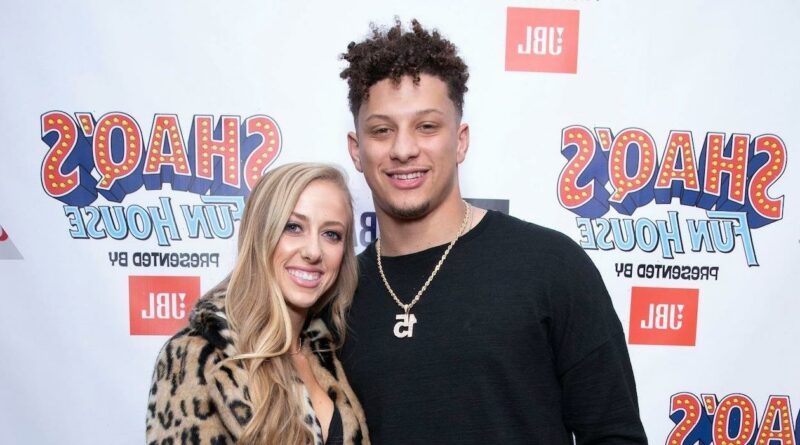 Not yet! Some football fans thought pregnant Brittany Matthews might have been giving birth when she was quiet during husband Patrick Mahomes‘ game on Sunday, November 27, but she says that was not the case.

Bump It Up! See Brittany Matthews’ Pregnancy Progress in Photos

“I am not in labor, y’all tripping 😂,” the Texas native, 27, tweeted on Sunday after NFL viewers noticed that she wasn’t sharing her thoughts while the Kansas City Chiefs played the Los Angeles Rams that day. “Sorry peeps I’m here,” she joked before sharing a photo of her and Mahomes’ 21-month-old daughter, Sterling. “Been occupied.”

The toddler and her mom were seemingly watching the game from a box at Arrowhead Stadium in Kansas City, Missouri, with the little one dressed in Chiefs colors and a Kansas City hair bow.

After clarifying that she was in fact in attendance at the game, Matthews chimed in with one of her usual commentary tweets, writing, “Defense is playing their ass off WOW.”

The Kansas City Current co-owner and the Chiefs quarterback, 27, tied the knot in March after getting engaged in September 2020. The duo, who met in high school, announced in May that they are expecting their second child.

“Round 2!” the couple captioned a joint Instagram post at the time. In one photo, Sterling held up a sign that read, “Big Sister Duties Coming Soon” while wearing a T-shirt with the phrase, “I Have a Secret to Tell You.”

Though the twosome’s second child hasn’t arrived just yet, Matthews revealed on Saturday, November 26, that she had already packed her bags in preparation for her hospital stay. “I’m packing baby boy’s hospital bag and my hospital bag, so I’m briefly just going to run through it with you guys,” she explained in an Instagram Story. “I’m going to show you the main things I’m packing for him and then putting in my bag because I know I didn’t share all this stuff with the first time just because I was nervous. I was a new mom. I didn’t know what I was going to use and what I wasn’t. So this time a little more educated.”

The former soccer player detailed some of the products she packed, including burp cloths, a swaddle, Aquaphor and diaper cream. Though hospitals typically provide baby blankets and other items, Matthews noted that she wanted to bring her own, along with pacifiers, diapers and wipes.

She also tucked in a sweet treat. “This is a weird thing, but hard candy,” she explained. “Obviously, once you start labor you cannot eat, so I needed something in my mouth to keep my mind off of food. Jolly Ranchers was that for me. I only like the blue ones.”