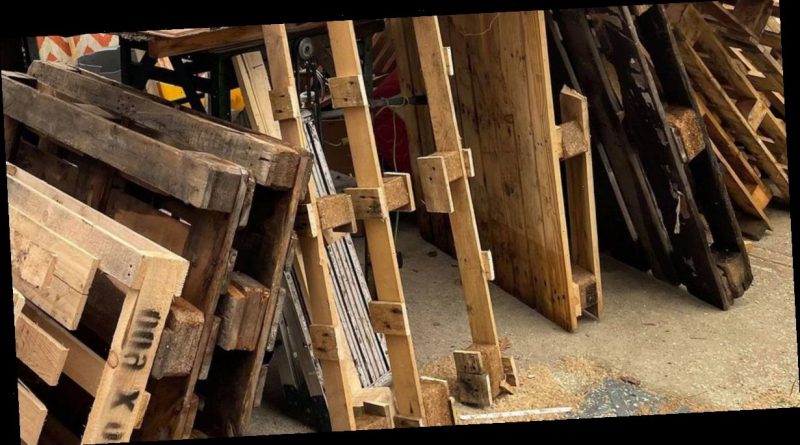 A crafty pair of brothers have blown away DIY fans by making their own bespoke parquet flooring for next to nothing.

Charlie Jack, 29, a carpenter and joiner, and his brother, Harry Wright, 35, an upholsterer made the stylish flooring using old wooden pallets.

They documented the process on Instagram, @sofasustainsuffolk., and Facebook at East Anglia Carpentry, where they have tonnes of fans.

Harry and Charlie are big fans of interior design and Harry even featured on Channel 4’s Great House Giveaway in 2020.

Originally, the pair planned on using reclaimed oak, but it was too damaged and so they turned to some scrap pallets – and we think the effect was all worth it.

Harry explained: “The design was created to change the vibe of the room, it’s always felt like a bit of a thoroughfare as it has a door each end.

"Our goal was to warm it up and make it cosy, to showcase my mother’s cherished belongings properly.

"We used around 50 pallets, which for speed we cut between the nail points.

“The parquet design also meant that we could use smaller bits of wood.

“We also used loads of pins and instant grab glue from Screwfix.”

Charlie added: “The technique was rather complicated, the processing of the pallets took the longest.

“First we had to find out where the borders would lay, which then allowed us to work out the inside measurement between borders, we then divided this to find out the size of the board we needed to make the 45 degree parquet pattern.

“Then the pallets were cut down and checked if they were nail free, we then run the pallet wood over the table saw, to get the correct width, then put them through the planer thicknesser to create a uniform depth.

“Finally we cut each tile on the chop saw to the perfect length.”

Then the pair pinned and glued down their design before polishing and oiling the finished product.

The most time consuming part of the build was finding and processing all of the pallets.

Harry noted: “Luckily we put an advert in the Bury St Edmunds community notice board asking for pallets and got a load for free that way. But I’d say in total hours it was probably around 40 for two people.

“We have still yet to finish the oiling, however there are a few paint touch ups left to do.

“And, we are installing an oak railway sleeper as the mantel in the room.”

The most difficult part of the entire process is the initial planning, claims Charlie.

He commented: “Things like working out the distances, size of the tiles and angles was a challenge.

“If you want to try this yourself, I’d recommend making sure that you have sharp blades and knee pads!”

Fans who spotted the creation when it was posted on Facebook were stunned by the parquet flooring.

“These skills are great even more so when using re-cycled materials.”

While a third commented: “Incredible.

“Talk about a labour of love and what a recommendation for your skills.”

Hundreds of others called the work “fantastic” and “brilliant”.

We have to agree – the finished effect is really impressive!