Home » Lifestyle » Can you crack the Easter eggs? What Disney fans can expect from weekend’s huge expo 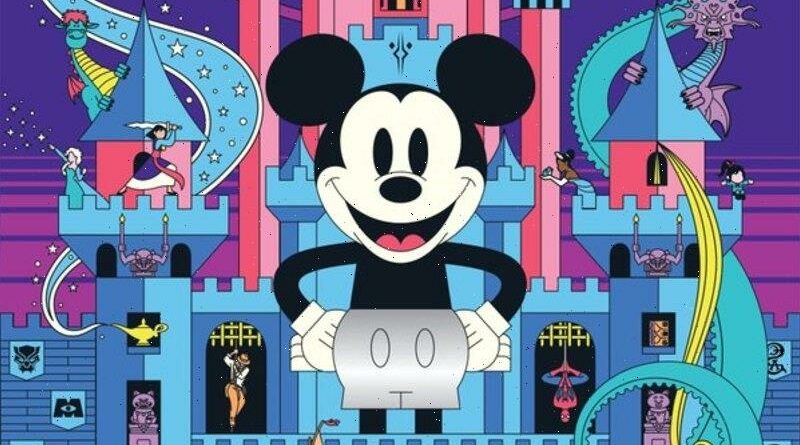 Any which way you crunch the numbers, Disney’s D23 Expo is a demonstration of the power of the House of Mouse. Just a few years ago, all eyes were on Netflix, which threatened to push the Hollywood studios into irrelevancy. But as the studios launched rival platforms, the landscape has shifted dramatically.

Netflix may still lead with 220 million subscribers, but Disney, which owns Disney+, Hulu and ESPN+, has dramatically narrowed the gap, with 196 million subscribers of its own. Following them are HBO/HBO Max/Discovery+ with 92.1 million, Amazon Prime Video with (roughly) around 56 million and Paramount+ with 43 million. 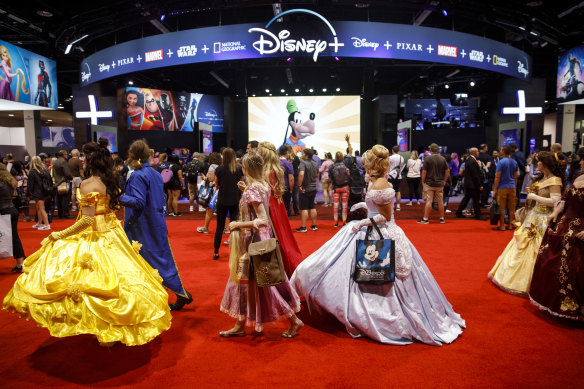 Princess for a day? Fans in cosplay at Disney’s D23 Expo.Credit:Patrick T. Fallon/Bloomberg

At the centre of Disney’s strategy is D23 Expo, a three-day fan convention focused on Disney-owned assets, which gets underway this weekend in Anaheim, California. A sort of Comic-Con for Disney-philes, it will push more than 100,000 people through its turnstiles and, more importantly, generate an explosion of media noise around exclusive trailers, announcements and sneak previews.

And Disney is not alone. They run a Star Wars-focused, studio-owned convention called Star Wars Celebration, Paramount has Star Trek Day, Warner Bros has DC FanDome, which focuses on its DC Comics properties, and Netflix has Tudum, named after the sound their logo makes.

The emphasis at this year’s D23 is expected to be Star Wars, in part because Lucasfilm’s stablemate Marvel poured a lot of energy into announcing a slew of new titles at Comic-Con in July.

A quick summary of that for those who missed it: Marvel’s Fantastic Four, Avengers: The Kang Dynasty and Secret Wars; a new trailer for Black Panther: Wakanda Forever; two new Captain America projects plus TV series Ironheart, Echo and Agatha: Coven of Chaos. 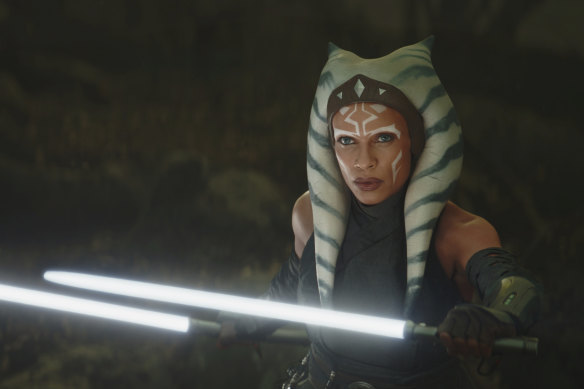 Lucasfilm is expected to treat fans at D23 to a glimpse of the new Star Wars series, Ahsoka, starring Rosario Dawson.Credit:Lucasfilm

On the Lucasfilm side of the business, most of its announced Star Wars slate has already or is about to air: The Mandalorian, Obi-Wan Kenobi, The Bad Batch, plus this month’s Andor. Another series, Ahsoka, is coming in 2023. But streaming platforms are hungry beasts, and the Disney+ Star Wars monster needs to be fed.

The prevailing wisdom of the online fan community is that a season three trailer for The Mandalorian is a certain starter this weekend, plus a major drop of some kind – an extended trailer or behind-the-scenes footage – from Ahsoka. Plus a look at Star Wars: Skeleton Crew, starring Jude Law, which was announced at Star Wars Celebration.

There could also be clarity on the fate of three projects which have drifted into silence in the last few years: the Rogue Squadron film, a standalone Star Wars film from Taika Waititi and a new trilogy of films from director Rian Johnson.

Disney is no slouch when it comes to dropping Easter eggs for fans, and many are scrutinising the official D23 poster for clues. Encouraging the discussion, Disney has said there are no less 58 hidden references in the poster.

Easiest to spot: the logo for Andor, which suggests a major series preview ahead of that show’s launch on September 21, and a “Baby Yoda” Grogu, which all but confirms there will be a season three trailer for The Mandalorian.

However, four other small notes stand out: artistic depictions of Spider-Man and the Shang-Chi symbol (which suggests announcements for new films from those two franchises), an X-wing starfighter (an update on Rogue Squadron, a no-brainer when you consider the billion-plus box office return for Paramount’s Top Gun sequel) and Indiana Jones (forthcoming news about the promised fifth Indiana Jones film?).

“I don’t think people going to D23, or DC FanDome, or Star Trek Day, see themselves as, to use the old Soviet KGB expression, useful idiots,” says Deadline senior editor Dominic Patten. “I think they see themselves as privy to exclusive footage and experiences, and part of a community that is engaged in admiration for a particular genre. That’s the magic.”

The third part of that “holy trinity”, Patten adds, is that the fans are coming to specifically engage with storied franchises like Marvel, Star Wars, the DC library and Star Trek. “Dedicated fans have what is projected as, and often fulfils, their idea of a once-in-a-lifetime exclusive experience,” he says.

While these large-scale fan conventions have become a central part of the studio marketing strategy, they are not the whole picture, says Patten. “The biggest parts are still out-and-out, old-fashioned advertising and brand name association,” he says.