Home » Lifestyle » Can you spot what's unusual about these chicken breasts?

Can you spot what’s unusual about these chicken breasts? Creative grandma, 52, wows thousands with her unusual ‘barbecue spread’

A talented home baker has wowed the internet after creating incredible sponge cakes that looks indistinguishable from actual chicken breasts.

Grandmother-of-10 Alice Munro, from Tasmania, carefully constructed layers of vanilla cakes with fondant to make it look identical to raw chicken – all while ensuring her dessert tasted delicious despite what it may look like.

The 52-year-old – who gets her baking inspiration from YouTube and Facebook – used a $3.50 cake mix, choc chips, cream, yellow, orange and red food colourings, glucose and vodka to replicate the protein. 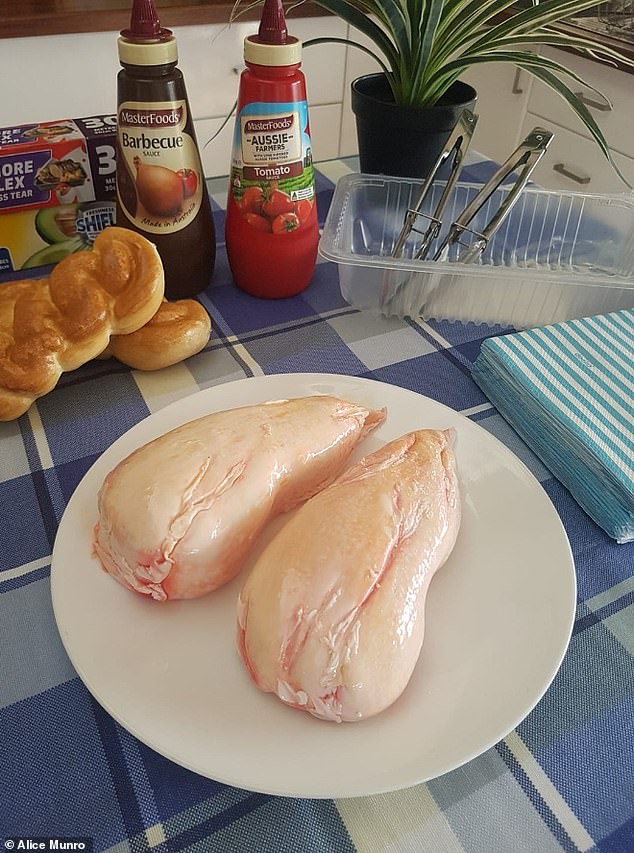 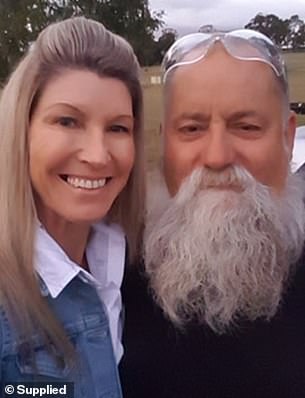 Alice Munro (pictured with her husband Mick), constructed a vanilla cake to make it look identical to raw chicken breasts

The mother-of-three said the idea to whip up the optical-illusion chicken cakes came to mind after she stumbled across a video from Ben Cullen, otherwise known as The Bake King, who’s known for baking cakes that look like realistic objects.

‘I saw these chicken breasts and thought “I’ve got to do this”. It looks so cool,’ she told Daily Mail Australia.

Once the cakes are baked, she carefully trimmed the sponges into the size of a chicken breast.

‘I just had to shape them, and cut layers into the sponge,’ she said.

Ms Munro said the cakes – who cost around $10 to make – took her just one-and-a-half hours to bake and assemble.

‘I just had leftover ganache from an avocado cake I made the day before. I rolled out white fondant, used a bit of yellow and orange colourings to create that marble, and used an air brush to create the bloody skin look,’ she explained.

She covered the layers of cakes with ganache using a palette knife, and then she placed aside to set.

‘To make the ganache, I just used 200 grams of choc chips, warm that up and added half a cup of cream,’ Ms Munro said.

Ms Munro then rolled out the fondant until it’s large enough to wrap over the three cakes. She gently placed the fondant over the breasts, and sculpt it into shape.

She trimmed off the excess fondant, and used a brush to create the ‘pinkish, bloody looking’ chicken pieces.

‘It was so easy to make. It came out beautiful, I loved this cook,’ she said.

She shared her spectacular creation in a Facebook group, with the captions: ‘I’m going to a BBQ today. I’m bringing dessert (my chicken breast cakes)’.

Her post was quickly divided, with many saying they were amazed with her realistic looking dessert, while others were ‘offended’ by her creation.

‘I’m really proud of my cooking. It really was a fun, silly cake to make,’ she said.

‘But unfortunately, some were offended, I got a few awful comments – it went from “wow” to “gross”. I wasn’t doing it to upset anyone, I just thought it was funny and my kids loved it. I was only playing around because I love baking different things.’

‘My daughter was like “I’m sorry mum, I can’t eat it,’ she said, laughing.

‘When my husband Mick came into the kitchen, I had the cakes on the bench and he said he needed to put them in the fridge because it made his tummy churn.’

For first time home bakers, Ms Munro said: ‘No matter what people say, if you want to make something even if you don’t have any skills, everything is on YouTube and Google. The stuff you learn online is incredible.’ 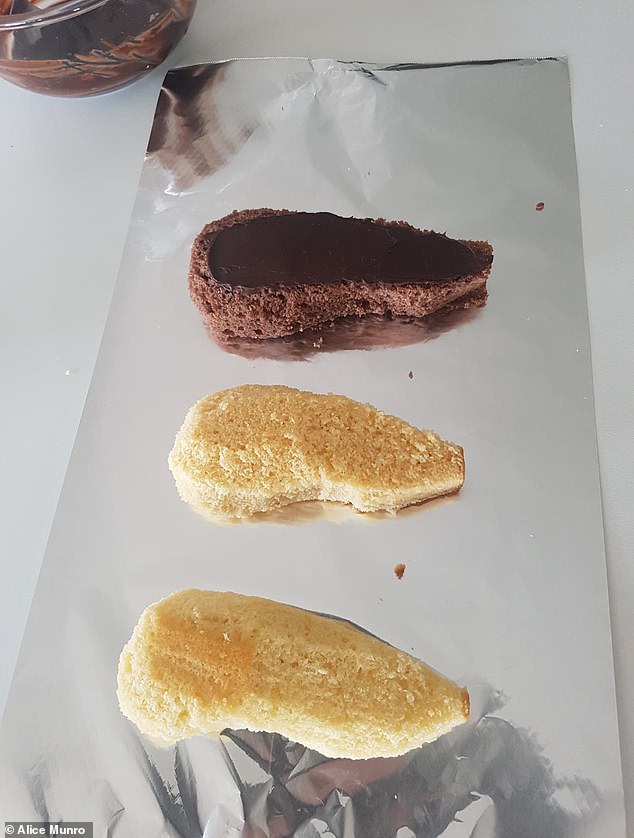 Once the cakes are baked, she carefully trimmed the sponges into the size of a chicken breast 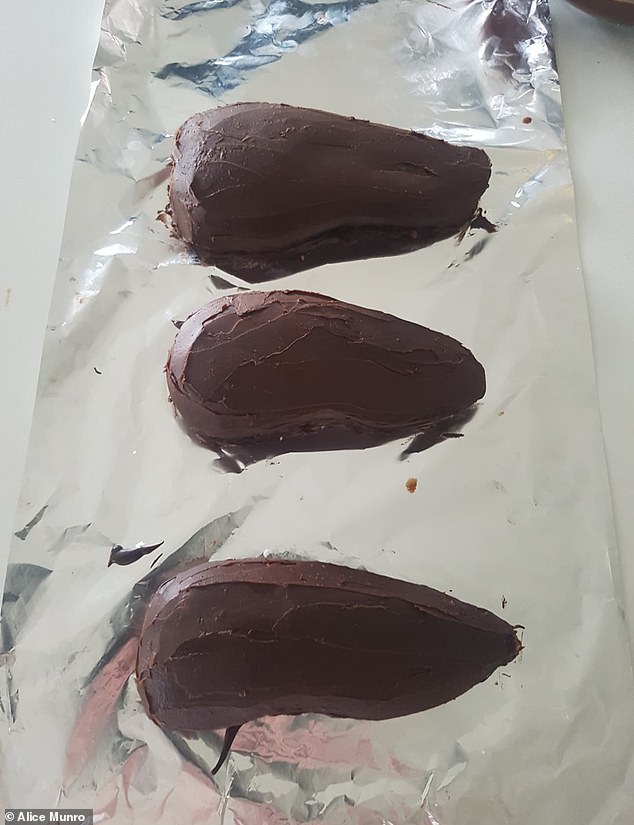 She covered the layers of cakes with ganache using a palette knife and ensure they are shaped into the size of chicken breasts, before rolling fondant over them 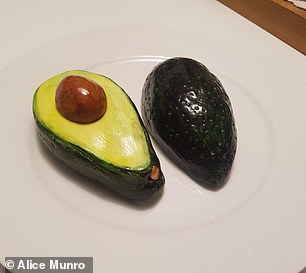 The day earlier, Ms Munro made a cake that looks exactly like an avocado. She had leftover ganache to make the chicken breasts

‘I like to make look-a-like [object] cakes and I love trying different things. I got the idea in a Facebook group so I googled “dishwashing sponge cake”, watched a few tutorials and decided I’d give it a go,’ she said.

‘It wasn’t complicated at all. I just used a vanilla sponge cake mix, and poured it into two cake tins – coloured one yellow and the other green. I added yellow colouring to the buttercream so I could use to stick the sponges together.’

And it isn’t the first time Ms Munro has impressed home bakers with her realistic looking cake. In February 2019, she baked a cake to make it look exactly like a KFC bucket meal with fries.

She said the impressive creation took her five to six hours to make to ensure it looked like the real deal. 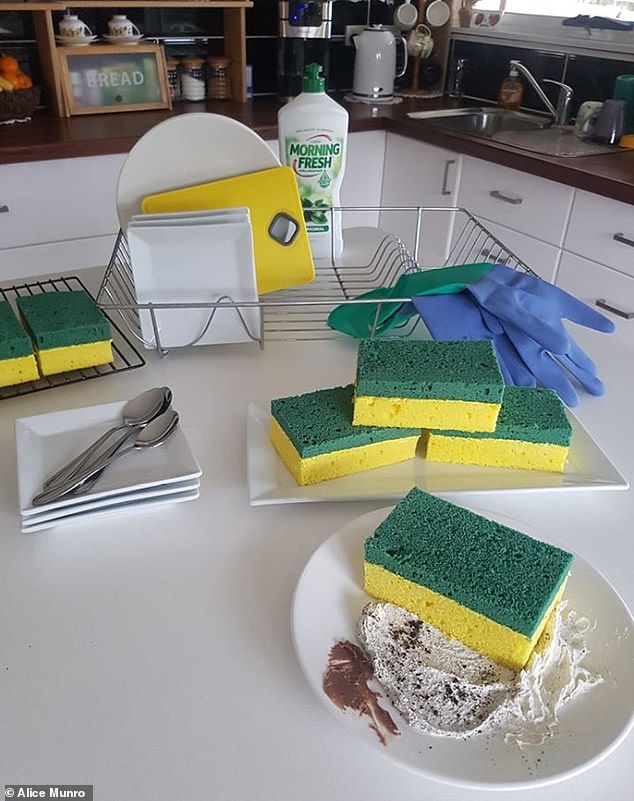 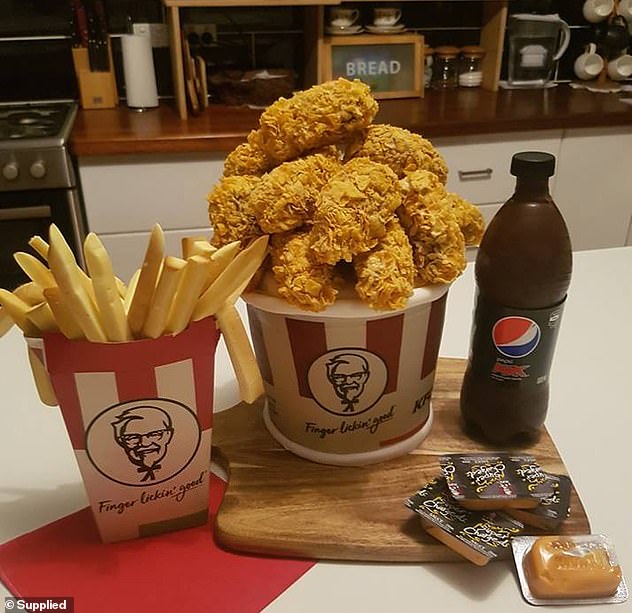 In February 2019, Ms Munro wowed thousands of people after sharing a seemingly innocent snap of a ‘KFC meal’ (pictured) on social media. It was actually a carefully constructed cake – only the chip box, Pepsi label and sauce packets are real

‘The chicken pieces are mud cake dipped in white chocolate and rolled in crushed cornflakes,’ she previously told FEMAIL.

‘The bucket is made of vanilla sponge cake. I used Bakels white fondant to cover the cake and attached an edible image around the cake as I have my own edible printer.’

To make the chips as realistic as possible, Ms Munro used an original chip box from the fast food chain.

She then stuffed it with paper towel so that she could position the yellow fondant fries which have been airbrushed with a light dusting of yellow/brown colouring.

‘For the Pepsi bottle I used an actual bottle as a chocolate mould and used the Pepsi wrapper to go back around it,’ she said.

She used three vanilla cakes placed on top of each other with chocolate icing acting as the glue to keep them together.