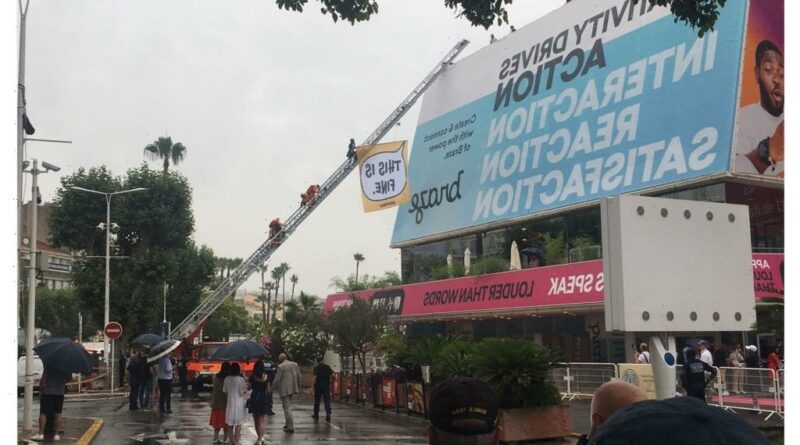 Delegates at Cannes Lions were stopped from entering the advertising festival this morning after Greenpeace activists staged an anti-fossil fuels protest on top of the Palais des Festival — the latest of several guerrilla stunts to disrupt the event.

Crowds, delegates and fans were all held back and doors closed while police attended the area.

A small crowd on the street, presumably supporters of the protestors, cheered as two men were escorted down an emergency ladder hastily erected on the main concourse.

Asked by Deadline about the problem, one French policeman shrugged and said only, “Greenpeace.”

Many delegates trying to access the Palais were queuing to hear from Netflix Co-CEO Ted Sarandos, who is due to deliver a keynote shortly. Other Hollywood figures such as Ryan Reynolds and Regina King have already appeared at the event, while Patrick Stewart is set to take to the stage later today.

The protest follows another by former ad exec Gustav Martner, who had his pass revoked on Monday night after pulling an anti-fossil fuel stunt for Greenpeace. It’s been a trying week for Cannes Lions organizers, with the protest, which centers on ad agencies work with fossil fuel companies, extending to a guerrilla marketing campaign along the Croisette based around the slogan, ‘No Awards on a Dead Planet.’

Campaigners also stormed the beachfront area of ad giant WPP’s stand on kayaks, according to ad trade The Drum. The protestors were dressed as the popular ‘This is Fine’ dog meme, which has also featured in the posted splashed around town.