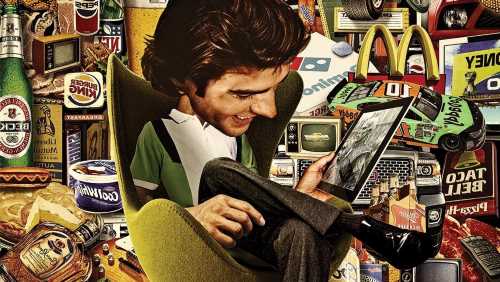 What if TV advertising meant something other than buying commercials that run on TV?

Paramount Global’s CBS is about to start listing its programs on a start-up service that aims to match TV programs with marketers eager to launch campaigns that use the shows to gain attention. Imagine a regional fast-food chain or a start-up online retailer — not to mention a big national consumer-goods manufacturer — being able to incorporate characters from “Young Sheldon” or the logo of “NCIS” to capture the attention of new customers.

The idea is to unlock the ability of advertisers “to hook up with programs,” says Alan Gould, a co-founder of the new exchange, MutualMarkets. “There is no easy way now for brands to do deals with those shows.”

People who want to date have Tinder. TV networks and advertisers are getting something similar.

The concept surfaces as TV networks and their streaming rivals are desperate to find new ways to call attention to their programs. CBS, NBC, ABC and Fox once had to contend only with a dizzying array of cable competitors. Now they must lure new viewers as Netflix and Amazon, not to mention their own streaming services, launch dozens of programs each year. TV companies still rely on “promos,” or teaser videos largely deployed on their own air, to boost awareness of their many series. And yet, the migration of audiences to digital venues makes that task more difficult, because the videos are seen by fewer people. Meanwhile, those who do see them are already watching the network’s series.

TV networks need “to start to extend our marketing reach to new audience bases for our content,” says Mike Benson, president and chief marketing officer of CBS, in an interview. Gould says MutualMarkets is also in discussions with another media company that he declined to name, and hopes to work with CBS and a second entity to test the service and learn what gains traction.

MutualMarkets seeks information about an advertiser’s specific audience targets, then combs through a database of recent, current and in-production content that is believed to attract the consumers most likely to be interested. Using artificial intelligence, the virtual marketplace can also help advertisers create templates for the actual ads, says Gould. TV and ad executives have to agree on certain parameters — such as number of consumer impressions, fees and windows of exclusivity to use certain show marks — as they negotiate. If all goes well, the advertiser generates new awareness among audiences who favor the shows, while the networks stand to benefit from a marketer spending money on a campaign that might spur new sampling.

Tying popular products to TV programs and movies has long been an attention-getting gambit. McDonald’s learned this long ago by producing “Happy Meals” that contained toys based on popular kids’ favorites and Disney movies. Netflix has also discovered the salutary effects of enlisting top advertisers to generate buzz around its programs. The streamer has a team devoted to creating such partnerships, some of which have resulted in Coca-Cola reviving New Coke to draw attention to a new season of “Stranger Things” and White Claw creating a new game to highlight the debut of “Glass Onion.”

More blue-chip marketers have tested these waters in recent years in more traditional venues. Brewing giant Anheuser-Busch InBev in 2019 ceded valuable space in a Super Bowl commercial for Bud Light to characters and themes from HBO’s “Game of Thrones,” which was about to launch its final season. Last year, General Motors revived characters and other elements associated with the HBO series “The Sopranos” to capture attention for a new line of Chevrolet electric vehicles. More is on the way. In just a few weeks. PepsiCo’s Frito-Lay will tap into the AMC series “Breaking Bad” during Fox’s broadcast of Super Bowl XLVII in February with a commercial for its PopCorners popped corn snack.

But such stuff is uncommon, the result of months of research, testing and negotiations between advertiser and media company. “It’s brutal. Every one of these deals is completely bespoke, “says Lloyd Braun, a former senior executive at ABC and Yahoo who is one of MutualMarkets’ advisors. “Occasionally, you get something like a Doritos or Taco Bell and it’s really good, but it can take months. There’s no systemized way to do it and you can’t scale it.”

Streaming has extended the life of many programs. Shows like “Breaking Bad” and “The Sopranos” have found new generations of fans simply because they are available to stream on demand. The rise of the streamers has also extended the relevance of programs that might ordinarily fade from prominence. Because so many shows remain “always on,” they cultivate a longer tail of fans. One feature of MutualMarkets is its ability to tell advertisers about themes and potential keywords about specific seasons of each show that is available in the database.

Many media outlets are trying to expand their ad business beyond the best-known advertisers. Both Walt Disney and NBCUniversal have in recent months made outreach to regional and local advertisers who might not typically think of national TV as a venue for their pitches. Streaming hubs, however, can earmark ads to specific viewers based on ZIP codes and data about geography, which has pushed big media conglomerates to seek out advertisers that focus on niche audiences.

“We want to experiment with different types of advertisers, whether you are a General Motors or a P&G and Verizon, or one of a ton of new startups and newer technologies that are looking to reach audiences in ways that maybe they haven’t thought of,” says CBS’ Benson.

Gould, an entrepreneur who has long studied the media space, isn’t someone to be dismissed easily. In 2008, he and his brother, Eric, sold IAG Research, a company they founded that measured viewer response to TV shows, ads and product placements, to Nielsen for a reported $225 million. In doing so, they were early to raise new concerns about the viability of traditional measures of audiences as technology changed the way people interacted with video. MutualMarkets counts Greycroft and Bessmer Venture Partners as backers.

The siblings see a chance to strike a new chord.  Even a TV show that doesn’t have the best ratings can attract a devoted audience, says Alan Gould. “It could be exactly the audience that a brand wants to engage with.” He is about to find out if Madison Avenue feels the same way.

VIP+ Analysis: Why the Future of Streaming Is in Ads