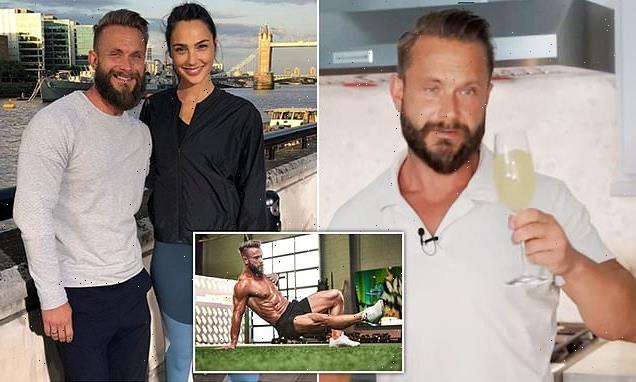 Sip your way to a six pack! Ripped A-list trainer who works with stars like Gal Gadot and Alexander Skarsgård reveals five healthiest alcoholic drinks to enjoy if you want to lose weight

A celebrity trainer has revealed how to enjoy your favorite alcoholic drinks without the fear of adding any pounds.

Magnus Lygdbäck, 43, a Swedish personal trainer and nutritionist who has worked with stars like Alexander Skarsgård, Gal Gadot and Ben Affleck, has shared his favorite low-calorie drinks that help keep the weight down.

In a YouTube video, the celebrity trainer shared his most-loved ‘low-calorie, healthy’ boozy drinks for those who are looking to ‘enjoy a drink and not that lose that six-pack, or maybe work your way to a six-pack.’

According to Magnus, you can still shed off the extra pounds without cutting off alcohol.

He explained to lose fat, you must be in a calorie deficit, which means you must consume less than you burn.

Alcohol has seven calories per gram, fat has nine calories, and both carbs and protein have four.

In an interview with Insider, Magnus said: ‘Fat loss is always about calories in and calories out.

‘Most drinks contain a lot of calories in the form of sugar and alcohol.

So if you want to lose fat while being able to enjoy a glass, make sure to pick low-calorie ingredients for your drink.’

He added that viewers should remember that just because the drinks are low in calories, doesn’t mean you should ‘drink more.’ 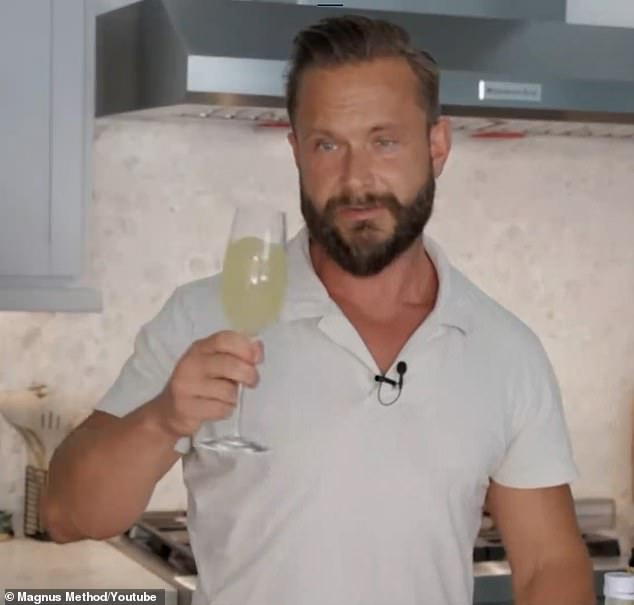 A Swedish personal trainer who has worked with stars like Alexander Skarsgård, Gal Gadot and Ben Affleck, has shared his favorite low-calorie drinks that help keep the weight down 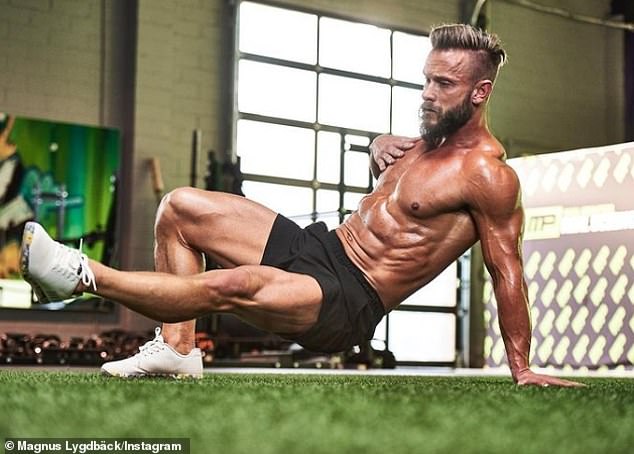 Magnus Lygdbäck, 43, who is also a nutritionist, shared his most-loved ‘low-calorie, healthy’ boozy drinks for those who are looking to ‘enjoy a drink and not that lose that six-pack’ 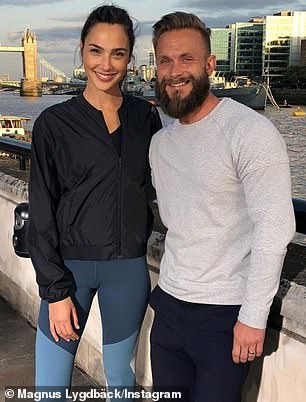 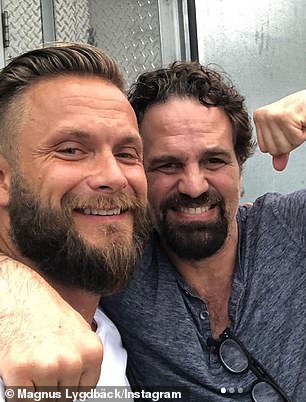 The fitness pro has worked with a host of stars over the years, including Wonder Woman star Gal (left) and Marvel actor Mark Ruffalo (right)

Cheers to weight loss with an Aperol Spritz

The celebrity trainer began by showing his over 228,000 subscribers how to enjoy an Aperol Spritz without fearing the sugar.

The drink is usually made with prosecco, but Magnus shared that you should opt for unsweet white wine when making this drink because its ‘zero sugar wine.’

He added that his version is a ‘really great’  because it keeps the taste without the calories.

‘A sugar-free wine is as “healthy” as it gets since its low in calories and doesn’t contain sugar that will add calories and spike blood sugar,’ he told Insider.

He begins by filling a wine glass with ice and adding one-third wine and one-third Aperol before adding sparkling water.

He finishes the drink by garnishing it with an orange or lemon slice.

Shed off the pounds while remaining simple with a vodka soda

Next up he shares how to make a ‘classic’ vodka soda.

He adds that the drink is one of his favorites because it’s ‘super simple to make and very low in calories.’

He begins by putting some ice in a glass, adds 1.5 ounces of vodka and ‘tops it off with some sparkling water.’

Magnus notes that you can add in an ounce of lemon juice.

He concludes the drink recipe by encouraging viewers to garnish it with a lemon and takes a swig.

Work off that weight with a whiskey sour

His third beloved low-cal drink is the perfect drink for whiskey lovers.

He begins by noting you’ll need some bourbon, lemon juice and simple syrup and adds that he uses agave because its low in sugar.

He fills the shaker with ice, adds two ounces of whiskey. 3/4 ounce of lemon juice, 3/4 ounce of agave or simple syrup before he gives it a good shake.

Magnus then strains the drink into a glass with ice and tops it off with a lemon wedge. 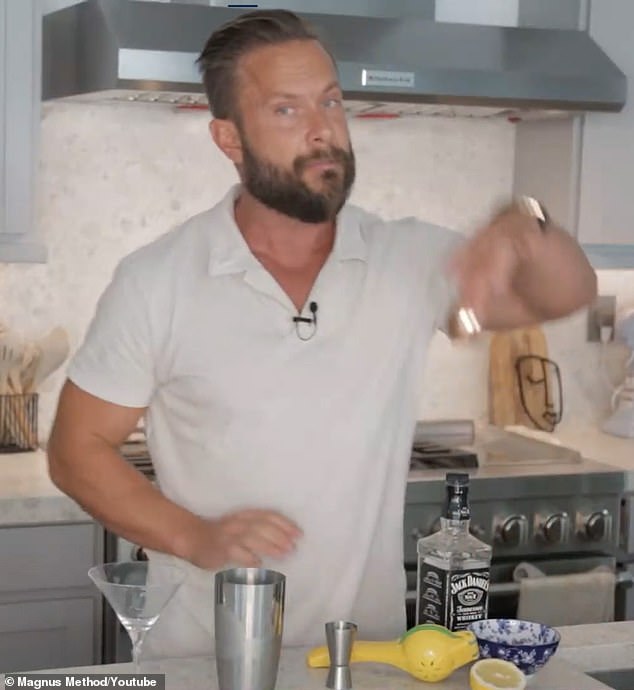 His third beloved low-cal drink is the perfect drink for whiskey lovers: a whiskey sour 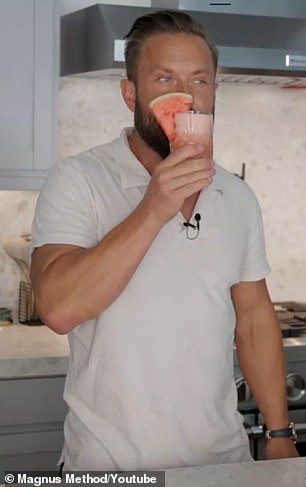 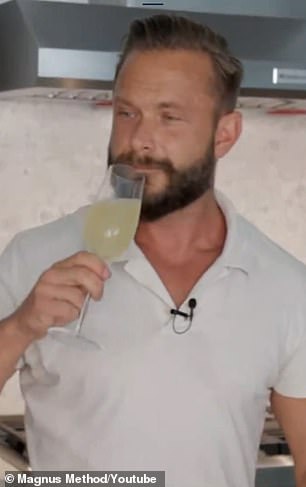 Magnus’ personal favorite drink is the yuzu fizz (right), while he notes that a white wine and watermelon spritzer (right) is perfect for warmer days

The fourth low-calorie drink isn’t just perfect for the summer time, but it’s also one of  the celebrity trainer’s drink of choice.

Magnus begins by adding two cups of chopped watermelon to a blender along with two cups of white zero sugar wine, a few drops of agave syrup and blends it until smooth.

He then pours the blended boozy drink into glasses before topping it off with sparkling water and garnishing it with a watermelon wedge.

Keep the weight off for good with a yuzu fizz

‘The fifth and final drink is actually my favorite,’ the personal trainer says.

Magnus’s most-loved drink is tasty and simple as it requires only two ingredients: dry cava and yuzu sake.

‘What I love about this sake is that you get some citrus flavor but it’s still a little bitter which mixes really well with the cava.

‘It’s a nice fruity drink that’s not too sweet.’

He finished it off by pouring yuzu sake into a champagne glute and topping it off with cava.