Spoilers for Season 2 Episode 3 of The Handmaid’s Tale.

There is a whole lot of ugliness on The Handmaid’s Tale: there are countless scenes of violence and torture that are incredibly hard to watch. But perhaps no subject is more painful than that of June’s daughter, Hannah, who was taken away from her and placed with another family elsewhere in Gilead. Now, June is pregnant again, but it is hard for her to celebrate this new life when her first child has been separated from her. It is clear that June wants to get Hannah back, but will mother and daughter ever be reunited?

We saw the painful scene of Hannah and June’s separation back in Season 1. June, Luke, and Hannah were attempting to run away from the dystopian society that was quickly being created in their city, but they were captured in the woods, and Hannah was ripped from June’s arms. For the rest of the season, Hannah resurfaces only in June’s memories — except for in one horrific instance: After Serena Waterford, the wife of the man that June ("Offred") has been assigned to as a handmaid, learns that June is pregnant, she brings her to see her daughter. She only views Hannah through the window of a locked car, and though she screams and cries and tries to escape, Hannah doesn’t notice that she is there. Serena threatens that if June tries to escape, Hannah will be harmed. 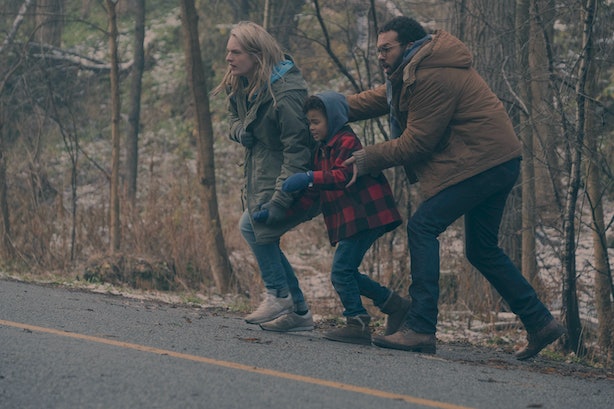 But ultimately, this doesn’t stop June from attempting to escape — at least, for a little while. Nick managed to pull through with his escape plan, and was able to successfully smuggle June out of the hospital where she had been receiving an ultrasound. Though she was on the run for over two months, hiding in the empty Boston Globe warehouse and then at the apartment of a Mayday operative, Omar, June was eventually captured on an airstrip, trying to flee the country. Now, according to the preview for Episode 4, she has been returned to Aunt Lydia for punishment, and then will be sent back to live with the Waterfords.

June felt very guilty about the prospect of escaping without her daughter. When Nick told her that it was time to leave the warehouse and head to the next location, June was incredibly reluctant to go without Hannah, and tasked Nick with finding out where her daughter was. She eventually comes to realize, however, that it is impossible to save Hannah without first saving herself. When she runs through the woods to escape she thinks of her daughter, saying in an internal monologue, "She left me once, now I have to leave her." But now that she is back with the Waterfords and under stricter watch than ever, it might be nearly impossible to get Hannah back. And, if June ever does manage to escape, she or Luke will have to reenter Gilead in order to save their daughter, a truly terrifying prospect.

Then there’s also the fact that it’s been years since Hannah has lived with Luke and June. Since children are the most sacred beings in Gilead, there’s little doubt that she has been living a comfortable life with her new family, even if she had a hard time adjusting. As sad as it might be to think about, it’s possible that Hannah barely remembers her family, or her old life, since she was so young when she was taken away. Of course, that doesn’t mean that June and Luke shouldn’t try everything they can to get their daughter back. But it might mean that the reunion, if it ever comes, might not be as easy or joyful as fans of the show might hope.

June’s new child with Nick, and her complicated relationship with him, might also make for an awkward family reunion. In many ways, their partnership is built mostly around sex, but it also does seem like they both genuinely care about each other. If June ever does manage to escape and reunite with Luke, her pregnancy and relationship with Nick might complicate her marriage, and the family dynamic if they do manage to get Hannah back.

But the important thing is that Hannah and June escape from the oppressive, violent regime. Everything else can be figured out later.