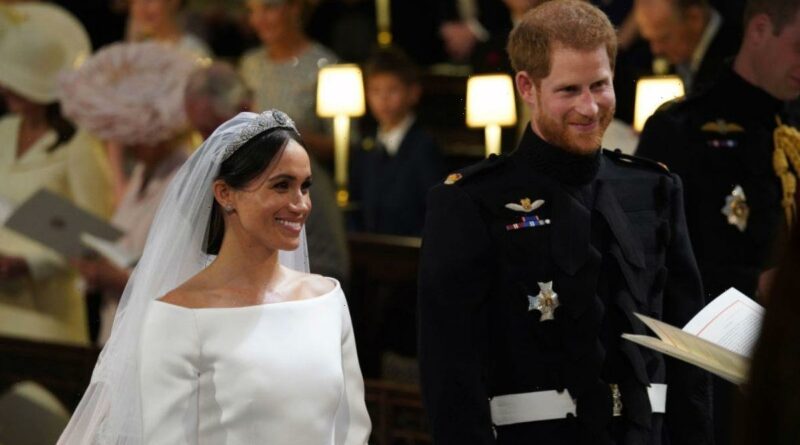 Royal Wedding: The Kingdom Choir perform 'Stand by Me'

Prince Harry and Meghan Markle tied the knot on May 19, 2018 at Windsor Castle. The Duke and Duchess recently shared how King Charles made their ceremony even more special.

Just this month Meghan and Harry released a Netflix documentary detailing their experiences within the Royal Family and what caused them to step back from it.

In one heartfelt clip, Meghan and Harry told viewers how Charles played a very important role in the nuptials.

Prince Harry stated: “My father helped us choose an orchestra, which made all the difference.”

Harry and Meghan also revealed they were keen to have a gospel choir sing at the wedding, and that there “wasn’t too much pushback” on that.

In fact, everyone thought it was a “wonderful” idea for the pair’s ceremony, and Charles helped orchestrate it.

Consequently, the best gospel singers from various choirs were selected and put together – “that’s how Kingdom Choir came to be”.

In the documentary, Meghan’s friend and tennis icon Serena Williams said it was “amazing” for Meghan to have her own culture represented.

She added: “And I thought it was really courageous and breaking boundaries but not meaning to.”

Meghan told her fans that Harry’s dad played another all-important role in their special day. However, it may not be a role royal fans would have expected.

She opened up to her father-in-law about the difficult family struggles she was facing in her own life, telling him, “I’ve lost my dad in this”.

Meghan continued: “Him as my father-in-law was really important to me. So I asked him to walk me down the aisle, and he said yes.”

Charles was pictured walking in a light grey suit alongside a beautiful Meghan.

Clare released a statement regarding Meghan’s dress and veil: “We wanted to create a timeless piece that would emphasise the iconic codes of Givenchy throughout its history, as well as convey modernity through sleek lines and sharp cuts.

“In contrast, the delicate floral beauty of the veil was a vision Meghan and I shared, a special gesture embracing the Commonwealth flora, ascending the circumference of the silk tulle.”

The bride’s veil paid homage to all 53 countries in the Commonwealth.

It also boasted the Californian poppy and wintersweet, a flower which grows at Kensington Palace.

Meghan described walking up the aisle with Charles “surreal”, as it was also the moment she first saw “H” on the day.

The now King Charles had a third important role in the wedding, which made it a royal service like no other.