For as long as I’ve known I wanted to be a mother, I have also known that I don’t like kids. As an only child, I grew up wary of babies and toddlers, never comfortable holding an infant or watching after a niece. And as I got older, that ambivalence only grew; I shied away from babysitting and camp counselor gigs, and even now prefer the company of adults — or myself — to that of the under-12 set. But my discomfort around children has never had anything to do with my desire to be a parent someday. I don’t like kids, but I’ll like my kids, I’ve always thought — at least until I saw Charlize Theron’s new movie Tully, a movie that terrified me and will likely do the same for other women due to its brutally honest portrayal of parenthood.

Directed by Jason Reitman and written by Diablo Cody, Tully stars Theron as Marlo, a 40-year-old mom of two who’s pregnant with her third. It’s made clear early on that this new baby wasn’t planned; Marlo and her husband Drew (Ron Livingston) already have their hands full with their highly anxious five-year-old and precocious pre-teen, and their attitude over the new arrival is more resigned than excited. Marlo, in particular, struggles to feel anything but dread, knowing just how draining parenthood already is.

What scared me so much about Tully was not Marlo’s apprehension over having a third kid; that is understandable, considering that the pregnancy is unexpected and Marlo previously thought she was long past her child-bearing years. No, what shook me was how much she seems to dislike being a parent to the two kids she already has. Part of her discontent is undoubtedly due to postpartum depression, but it runs deeper than that, lasting years after each child’s birth. She’s resentful of her children, and her reason why is the scariest thing of all: she seems to regret having had them.

To Marlo, motherhood is an endless cycle of misery: diaper changes and 2 a.m. feedings and behavioral problems and expensive tutors and on and on and on. There is never a break, or even a silver lining; yes, she loves her kids, but every rare moment of peace or happiness — a fun conversation in the car, a hug at the dinner table — lasts no more than a few seconds before things go back to "normal," a.k.a. disaster. Marlo badly misses her old life, and often wistfully reminisces over the freedom of her 20s and her former sense of self. She doesn’t like the person she’s become since giving birth — someone for whom career and self-care have come second to her kids, time and time again.

The fact that Drew is often away traveling for work, leaving Marlo alone with the children, certainly doesn’t help. Her whole life is her kids, and being with them leaves her deeply unhappy, especially when she meets free-spirited 20-something Tully (Mackenzie Davis) who’s a walking reminder of what Marlo used to be. 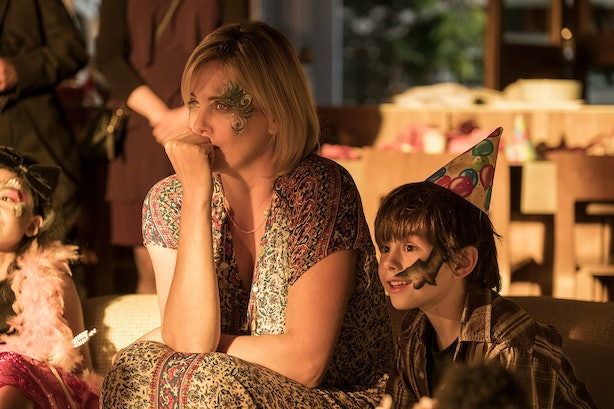 The idea that parenthood can be less than perfect isn’t anything new or shocking, of course; any aspiring mom or dad who thinks it’ll be a walk in the park has clearly never met an actual parent in their life. Parenthood is hard, and messy, and draining, and it changes your life in a thousand frustrating ways. But for many 20-somethings like myself, that nerve-wracking reality is tempered by the fact — or so I thought — that it’ll automatically come with plenty of love for our kids and happiness over our lives with them. We’ll deal with the hardships, because motherhood will be worth it. We’ll miss our old lives, sure, but we’ll be so grateful to have our new ones.

Except for Marlo, that’s not what happens. And while sure, she’s a fictional character, her story will undoubtedly feel real for many actual moms. It just hasn’t been talked about much, or shown on-screen before; although movies and shows like Parenthood and Kramer Vs. Kramer have shown frazzled, stressed, and unsatisfied moms in the past, the concept of the regretful mom — who would actually take back the choice if she could — has long been ignored. Tully, though puts the truth out there. Motherhood can be something women can truly, deeply regret. It can be the wrong choice. It can be the biggest mistake you’ll ever make.

Of course, plenty of moms are OK with the sacrifices they’ve made as parents because of the joy motherhood brings them, and wouldn’t take the decision back if they could. But Tully shows that the other side is possible, and for those of us contemplating parenthood one day, that is truly as scary as it can get.