Check out what’s clicking on FoxBusiness.com

A man in the People's Republic of China has reportedly won a regional lottery, and he’s apparently planning to hide the winnings from his wife and children until he figures out what to do with the jackpot.

The Guangxi Welfare Lottery issued a press release via WeChat – a Chinese instant messaging and mobile payment app – stating the winner claimed his prize anonymously on Oct. 24 under the alias "Mr. Li."

Mr. Li reportedly won 219 million yuan from the Guangxi Welfare Lottery’s grand prize, which is equivalent to around $30 million, according to currency converters.

Photos attached to the press release show Mr. Li donned a yellow mascot costume that fully hid his face and body when he claimed his prize. 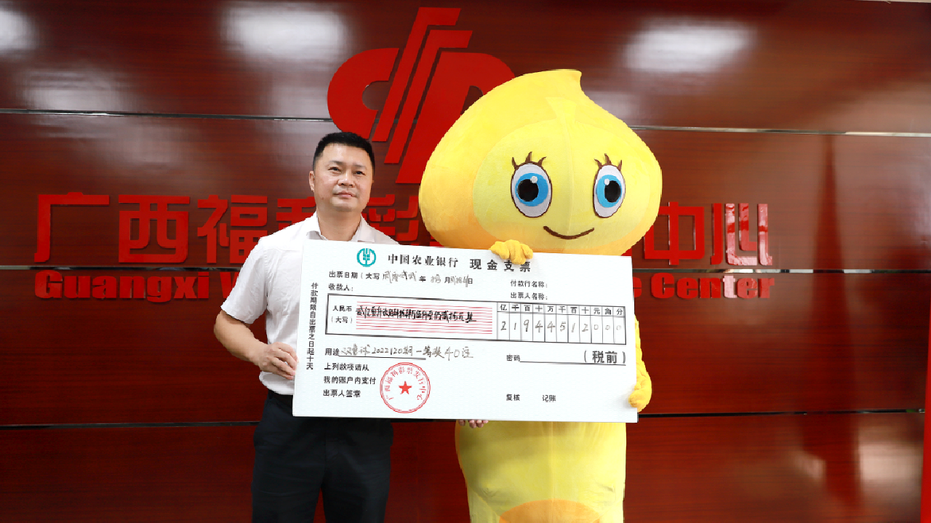 The Guangxi Welfare Lottery noted that the mascot costume Mr. Li wore is named Fudou and represents the Nanning-based lottery.

Mr. Li accepted a cash check from Lan Ting, the secretary and director of the general party branch of the Guangxi Welfare Lottery Issuance Center, according to the press release.

HOW TO UP YOUR CHANCES OF WINNING THE LOTTERY 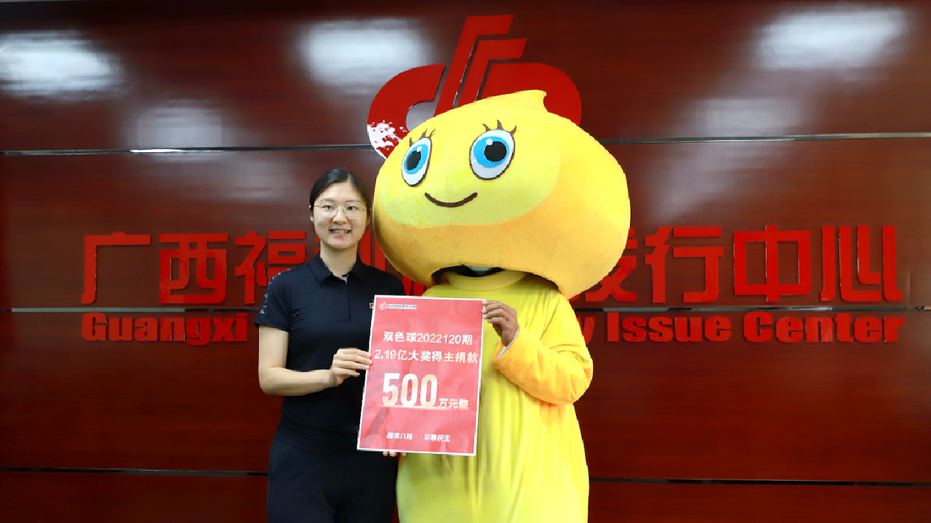 Mr. Li told the Guangxi Welfare Lottery he hasn’t notified his family or friends about his winnings and is trying to decide what to do with the money.

"I didn't tell my wife and children, because I was afraid that they would be too inflated and would not work or work hard in the future," Mr. Li reportedly said in a statement.

POWERBALL WINNER PITFALLS: AFTER YOU HIT THE JACKPOT, 'DON'T DO THIS,' SAYS PHILADELPHIA LAWYER

Mr. Li also said he felt nervous and had trouble sleeping after he learned he won the lottery on Oct. 21, according to the lottery press release. He reportedly drove to Nanning a day later and hunkered down in a hotel because he feared losing his winning tickets – which had the Guangxi Welfare Lottery’s winning numbers "02, 15, 19, 26, 27, 29+02."

The Guangxi Welfare Lottery published copies of what it reported to be Mr. Li’s winning tickets. Mr. Li reportedly purchased three tickets from a Welfare Lottery Betting Station at the Litang Department Store on Oct. 20. 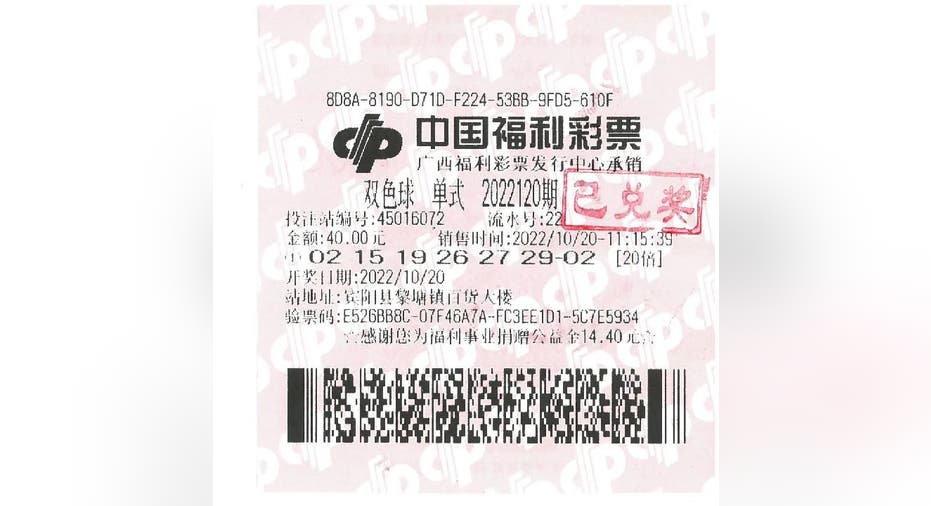 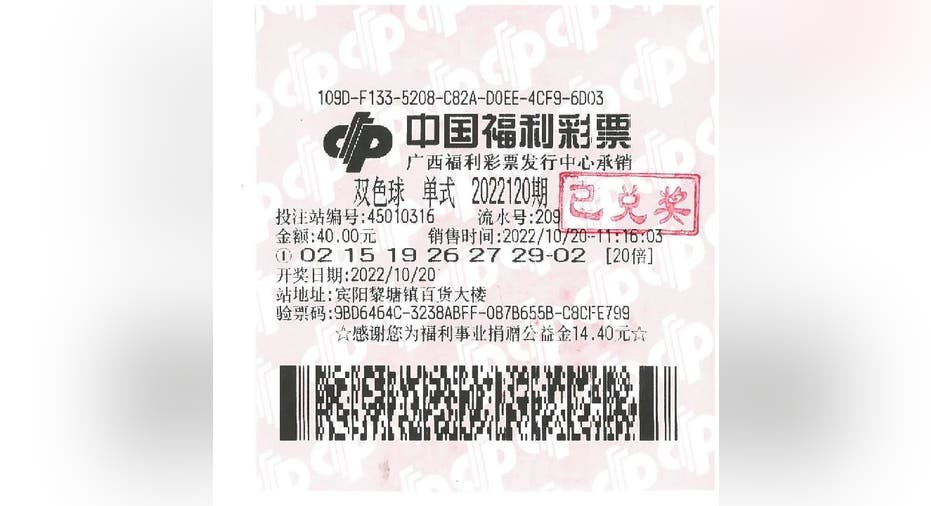 Taxes will be taken out of Mr. Li’s winnings and his donation will be deducted, according to the Guangxi Welfare Lottery’s press release. 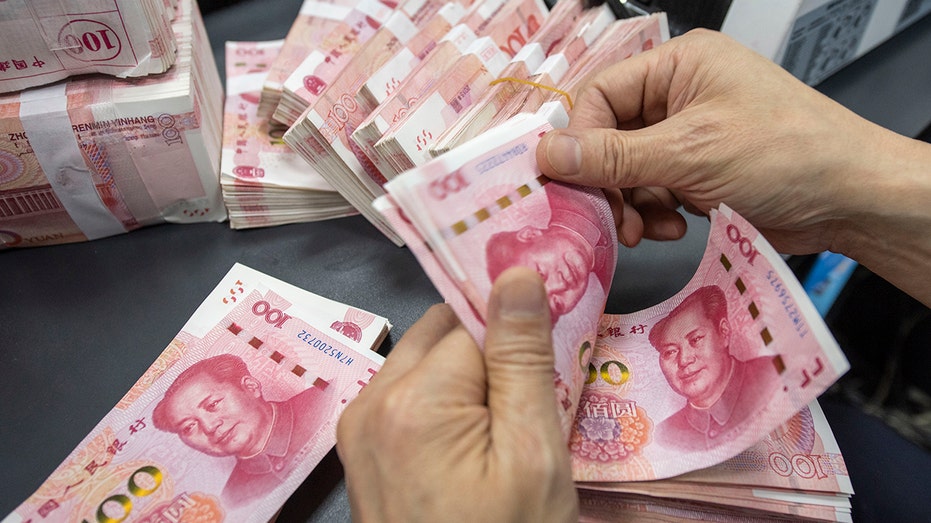 Chinese yuan is the basic monetary unit of the People’s Republic of China. (CFOTO/Future Publishing via Getty Images / Getty Images)

"There is a lot of chance in winning the lottery, and there is no special rule to follow," the Guangxi Welfare Lottery wrote, in its press release. 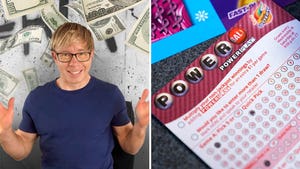 Iowa Powerball winner reveals what won’t change after you win the $1.6 billion in lottery

Iowa lottery winner Timothy Schultz reveals what won’t change after a lottery win. You may have a hard time trusting people or still have a devastating health diagnosis, for example.

Mr. Li’s reported lottery win has made international headlines as Americans in the U.S. have been playing the Powerball, a multi-state lottery that’s reached a record $2.04 billion.

The Powerball is offered in 45 states, the District of Columbia, Puerto Rico and the U.S. Virgin Islands.